Now that comet 67P/Churyumov-Gerasimenko is within our reach, Rosetta’s mass spectrometer COSIMA, managed by the Max Planck Institute for Solar System Research in Germany, is beginning to reach for cometary dust. Literally.

On Sunday 10 August 2014, COSIMA will expose its first of 24 targetholders aiming to collect single dust particles. This might take a while. After all, from dust particle modeling, 67P/C-G’s coma is still comparable to a high-quality cleanroom. But, as 67P/C-G travels closer to the Sun along its orbit, the comet’s activity will increase and more dust will be within reach. For now, we are planning to keep the target exposed for one month, but checking on a weekly basis if the model predictions are not too low and if we are lucky.

COSIMA’s targets were developed and prepared by the Universität der Bundeswehr in Germany. Each of these targets measures one square centimetre. It consists of a gold plate covered by a 30 µm thick layer of “metal black” (gold in this case), which has a very low albedo due to its high porosity.

Tests in the laboratory have shown that this layer should decelerate and capture cometary dust particles impacting with velocities of ~100 m/s. The grazing incidence illumination by LED’s combined with the very low albedo of the target will provide high contrast for collected cometary grains, in particular if they stick out of the “gold black” layer. 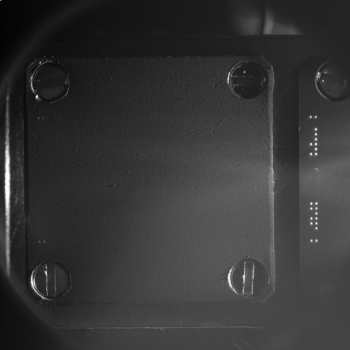 COSISCOPE image of the first target taken on 19 July 2014 (before the exposure, on 10 August, for cometary dust collection). The 1×1 cm target consists of a gold plate covered with a thin layer (30 µm) of gold nanoparticles (“gold black”). Illumination is by two LEDs, from the right side in this case. The bright dots on the vertical strip on the right side are used for target identification and for defining the coordinate system. Credits: ESA/Rosetta/MPS for COSIMA Team MPS/CSNSM/UNIBW/TUORLA/IWF/IAS/ESA/BUW/MPE/LPC2E/LCM/FMI/UTU/LISA/UOFC/vH&S

As a reference, an image of this target has been obtained before cometary dust exposure on 19 July 2014 by the COSISCOPE camera, COSIMA’s built-in microscope which was developed by Institut d’Astrophysique Spatiale (CNRS/Université Paris Sud, France).

The image shows…. well, basically nothing. But that’s the point. We will identify the dust grains we collect on the target’s surface by comparison with this empty target. The COSISCOPE microscope will take new images every week from now onwards.

The grains we identify will then be analysed in mid-September, thus providing the first in-situ analysis of cometary grains with a high mass resolution. COSIMA uses the method of Secondary Ion Mass Spectrometry. This means that the dust particles are in for quite a ride! They will be fired at with a beam of Indium ions. This will spark individual ions (we say secondary ions) from their surfaces, which will then be analysed with COSIMA’s mass spectrometer.

All in all, this will help us understand what material cometary dust is made of, and that is the major science goal of COSIMA.

This guest post was contributed by the COSIMA team at the Max Planck Institute for Solar System Research in Germany.