Now that Rosetta has reached comet 67P/C-G, it’s time to unlock this icy treasure chest. Comets hold many secrets about the birth and evolution of the Solar System, but also about the origin and history of many molecules that are fundamental for life on Earth – to name just one, water.

The broad range of instruments on board Rosetta will now investigate the surface and environment of 67P/C-G’s nucleus in unprecedented detail. Some have already started to do so from afar, producing scientific results that were presented during this afternoon’s session at the Rosetta Rendezvous event in ESOC, Darmstadt. 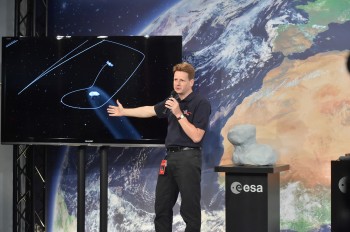 Getting to know the comet in greater detail is a necessary step to get any closer to it, which is in turn key to achieve a global mapping of the comet’s nucleus. Frank Budnik, Flight Dynamics expert at ESA, described the manoeuvres entailed in this initial characterisation phase.

While Rosetta flies through the first two “triangles”, the flight dynamics engineers at ESA will gather information to improve their estimate of the comet’s mass. Knowing the mass is necessary to plan further steps and get into orbit around the comet.

The following phase is the global mapping, during which the team plans to map at least 80 per cent of the comet’s surface. Eventually, Rosetta will go even closer – between 10 and 30 km – for the close observation phase, to start identifying landing sites.

You can view an animation of Rosetta’s manoeuvres planned for the coming weeks here.

A simulated view of Rosetta and where it’s pointing, with the different fields of view of various instruments highlighted. From L. O’Rourke’s presentation.

A brief overview of what’s coming next from the Science Ground Segment was provided by Laurence O’Rourke from the Rosetta Science Operations team at ESA. Centralised planning is a must to coordinate the operations of the 11 instruments on board Rosetta and to maximise the science they will perform.

More details about the landing site selection, as well as about the scientific results from VIRTIS, MIRO and OSIRIS will be provided in the next blog posts.

Watch a full replay of the livestream of the afternoon session here.