How will we choose a landing site? 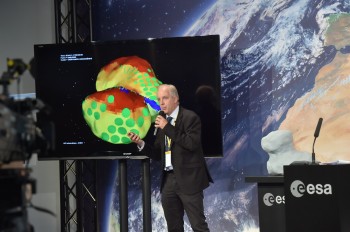 As the latest images from OSIRIS make clear, choosing a landing site for Philae will not be easy. In the afternoon session of the Rosetta rendezvous event at ESOC today, Stefan Ulamec, Philae Lander Manager from DLR, talked about some of the challenges that will be facing the team.

One challenge will be landing in low gravity. This was tested at the Max Planck Institute in Katlenburg-Lindau before launch.

Later, tests were carried out at the Landing and Mobility Test Facility (LAMA) of DLR in Bremen, where landing in sandy conditions and on different slopes could be assessed using the qualification model of the Philae lander.

Another fear when the lander was being designed was that it would rebound from the surface – but this was when they still thought the surface would be very hard. Indications now are that surface appears to be soft so Ulamec thinks that rebounding won’t be such an issue. We’ll soon find out what the surface is made of, but in any case, the lander is equipped with a harpoon system and ice screws to secure it to the surface. In addition, the touchdown will be at a speed of just 1 m/s – Ulamec described: “this is like walking and bouncing against a wall; it hurts but it won’t kill you!”

But what about the surprising comet shape? Not the standard ‘potato’ that everyone was expecting – more like two potatoes stuck together, or even a duck. Already, there has been a very preliminary analysis carried out at CNES showing some potentially interesting sites based on the illumination conditions and flight dynamic restrictions.

But now it’s time to start the process for real: the landing site selection group will meet for their first full meeting 22-24 August, at which stage they will select a maximum of 5 candidate landing sites.

Watch Stefan Ulamec’s presentation in the replay of the afternoon session here.