Some of the instruments on board Rosetta have already started to produce scientific results. During yesterday’s afternoon session at ESOC, Darmstadt, we heard about these from the principal investigators of VIRTIS, MIRO and OSIRIS.

“A gateway to the great science that is going to come in the next months” – so were these first results described by Mark McCaughrean, Senior Scientific Advisor for ESA’s Directorate of Space and Robotic Exploration, who moderated the afternoon session. 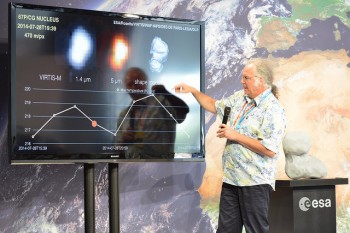 First measurements from the Visible and Infrared Thermal Imaging Spectrometer (VIRTIS) on board Rosetta have been probing the surface temperature on the nucleus of comet 67P/C-G. The Principal Investigator of VIRTIS, Fabrizio Capaccioni, explained how the measurements became increasingly more precise as Rosetta approached the comet.

Within only a couple of weeks, however, the situation changed dramatically for VIRTIS: on 29 July, the resolution had increased to slightly less than 500 m per pixel. With these data, it is possible to map temperature variations on the comet’s nucleus: in the hottest regions, the maximum temperature is even higher than the previous data had suggested, up to 220 K.

Capaccioni explained how such a high temperature suggests that the surface of 67P/C-G’s nucleus is devoid of volatiles, because these compounds are not capable of removing heat. This also indicates that the thermal conductivity through the upper layers of the nucleus is limited, pointing to a porous surface.

As well as this, the VIRTIS data seem to show a modulation of temperature as the comet’s nucleus rotates, as shown in this video. Differences in temperature on the surface of the nucleus could be due to variations of the chemical composition, to different illumination, or to variations of other physical properties. This will be investigated in greater detail as VIRTIS will collect more and even better data.

Observing at even longer wavelengths, the Microwave Instrument for Rosetta Orbiter (MIRO) also studies the thermal properties of the comet’s nucleus and environment.

Sam Gulkis holding a glass of water at the end of his presentation. Recent measurements from MIRO show that comet 67P/C-G is now releasing the equivalent of two glasses of water per second. Credit: ESA/S.Bierwald

Sam Gulkis, the Principal Investigator of MIRO, explained how this small radio telescope is designed to study the development of the comet’s coma by monitoring the heat transfer inside the nucleus and how heat comes off when the comet approaches the Sun. At each pass by the Sun, a comet releases some of its heat – Gulkis compared it to a snake shedding its skin every year.

MIRO can also take spectra, seeking for the signatures from a variety of molecules – most importantly, water. To stress the importance of comets to study the history of this fundamental molecule in the Solar System, Gulkis walked into his presentation carrying a glass of water!

The first measurement of water outgassing from the comet’s nucleus was obtained with MIRO in June, even earlier than the scientists had expected to first detect it. Ever since, they’ve detected water in all the subsequent observations. More on the first detection of water here.

So far, MIRO has measured global properties of the coma and nucleus, but now that Rosetta is closer to the comet, it is possible to resolve the nucleus. This will allow a more detailed mapping of the temperature, especially at potential landing sites. The team will also look for lines from other molecules, such as carbon monoxide, ammonia and methanol; these will also improve the temperature estimates of the nucleus and coma. 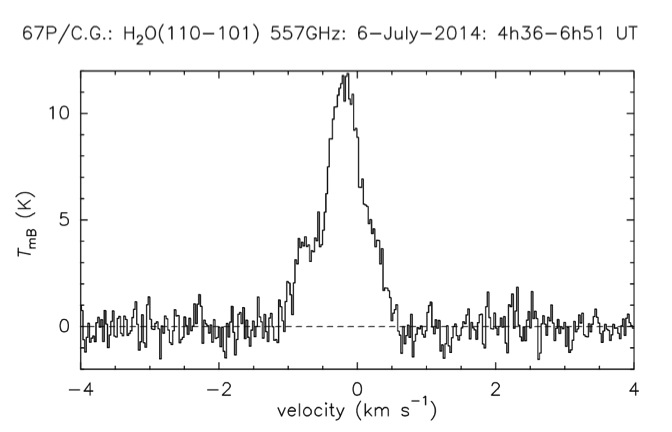 An emission line from water detected with MIRO. The peak is offset with respect to zero towards the negative side: this blueshift is due to the water outgassing from the comet and moving towards the spacecraft. From S. Gulkis’s presentation.

The final presentation was given by Holger Sierks, Principal Investigator of OSIRIS, who unveiled the latest images of the comet’s nucleus that were downloaded from the spacecraft in the morning. The images don’t lie: Rosetta has indeed arrived at comet 67P/C-G!

Zooming into these stunning images from the OSIRIS narrow-angle camera reveals an incredible amount of structure: boulders and cliffs, flat and smooth areas, and a variety of topographical features. This is the first high-resolution view ever obtained of a cometary nucleus.

Sierks also showed how combining images taken at different wavelengths can reveal an even greater degree of detail, enabling scientists to correlate structures on the nucleus with the comet’s activity observed at large. The team is now looking forward to even higher resolution images and to the excitement of the coming weeks as Rosetta gets closer and closer to the comet.

Watch a full replay of the livestream of the afternoon session here.