Three days were devoted to research benefits of the International Space Station (ISS) and its future at the first ISS symposium in Berlin 2-4 May. Many impressive results were presented and the message was clear:  scientific research on the Space Station is increasing our knowledge of the world and creating tangible benefits for humankind – right now. This is only the beginning because the Space Station will continue to operate for at least eight more years as the only permanent weightless laboratory available to scientists. Nobody knows exactly what results the Station will produce but the future is promising.

ISS director for NASA Mark Uhran said in his presentation that many people underestimate building and maintaining a large Space Station. “It is surely as big a challenge as building the pyramids in Egypt but fortunately it did not take as long” he said. Space Station construction completed in 2010 allowing more time to be spent on research. In only two years of normal operation the results are remarkable.

Highlights of the symposium and research results cover fundamental science as well as industrial, medical and consumer applications.

Science for the benefit of humankind

JAXA’s MAXI instrument monitors the complete sky using X-Rays. It acts as an early warning system for ground telescopes, telling operators where to look when something interesting occurs in our universe. Scientists on Earth managed to capture the first-ever images of a black hole swallowing a star 3.9 billion light years away. Without MAXI astronomers would not have known where to look.

The AMS-02 instrument is searching for dark matter on the Space Station. Proclaimed the ‘crown jewels of ISS’ by Professor Schaele, it is a triumph in international cooperation and high-precision engineering. Featuring multiple sensors that can self-calibrate, it detects quantum particles and is recording vast amounts of data. Professor Schaele explained how this fundamental research could benefit actual problems of people on Earth: “when Max Planck was investigating fundamental science, he never could have imagined that his discoveries would lead to the semiconductor and eventually to the internet”.

ACES will be the some of the most precise clocks created by humans. The ISS is a an ideal platform for atomic clocks: free from the influence of gravity they will be more accurate than they could ever be on Earth. By comparing the time on the ISS with atomic clocks on Earth, scientists will test fundamental constants of physics but ACES will also double the accuracy of satellite navigation.

Many life-changing technologies result from ISS research in the field of medicine. Spin-off technology used on astronauts offers simple ways of monitoring patients’ temperature with only one sensor placed on the forehead. Embarrassing and intrusive thermometers will no longer be needed and this will increase hygiene and reduce nurses workloads. 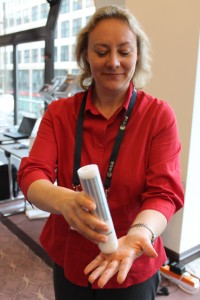 Plasma therapy, using electrically-charged gas developed on the ISS, may help save many lives. Each year thousands of people die from antibiotic resistant bacteria. Zapping

bacteria with plasma irradiation kills the microbes but is harmless to human beings. This revolution in health care can be used to sanitize plants and cure symptoms of genetic disorders as well. Soon we will see commercial sanitizers for home use enter our everyday lives.

Canada has developed an expertise in robotic arms for the Space Station and spin-off technology is being used in operating theatres. A robot as dexterous as the human hand, but even more precise and tremor-free allows for more precise interventions making brain surgery in MRI scanners possible.

Research on astronaut health promises benefits for humans on Earth. Many biological functions degrade in space. Astronauts’ bodies offer an ideal test bed to understand osteoporosis or weakened immune systems for example. Researchers are linking osteoporosis to salt intake and have targeted the enzyme partly responsible for immune cell death.

There is more, consumers will benefit from ISS research through better smartphones and tastier cappuccinos. Foams offer many benefits over solid materials, they can be stronger and lighter than conventional materials. But understanding foams and creating foam materials on Earth is very difficult – gravity pulls on the bubbles and hinders research.

The ISS has a metal furnace to research metallic foams. Access has developed a titanium-aluminium alloy that is being used in jet turbines. The first commercial airplanes to use Space Station metals were commissioned during the symposium. The lighter alloy means that the aircraft weigh less and are more fuel efficient.

Commercial applications based on NASA’s research in metals will be found everywhere by the end of this year as the latest generation of iPhones will use ‘Liquidmetal’ technology. Developed in micro-gravity these alloys mix three or more metals, with characteristics similar to plastic that cool quickly and have more than twice the strength of titanium.

Nestlé is using research on the ISS to understand foams better. Foam’s are present in many of their products, from chocolate bars to instant cappuccino’s and chocolate mousse. The Space Station is helping Nestlé  creating the perfect foam that consumers demand.

The five partner space agencies still have at least eight years of ISS utilisation ahead of them. Many agencies are using the ISS to research further space exploration technologies. Roscosmos is looking towards improving space systems such as air-locks as well as developing new inflatable modules. JAXA is focussing on the field of bio-medicine on a progressively larger scale: from microbes via plants and animals to human beings. NASA is allowing commercial companies to take over transportation to focus on science and using the ISS as a platform for exploring beyond low Earth orbit.

All agencies are committed to decreasing operational costs and shortening the time between submitting a research proposal to flying an experiment on the ISS. All organisations are invited to submit proposals, from universities and industry research groups to commercial companies. By applying an open invitation model  as many communities as possible can benefit from ISS research.

The ISS is available now: let’s use it!