Send your computer code into space with astronaut Tim Peake

The UK Space Agency, ESA, and the Raspberry Pi Foundation have announced a new competition for UK school children to write code that will fly with Tim Peake on the International Space Station.

Last year, leading UK space organisations joined forces with British ESA Astronaut Tim Peake and Raspberry Pi Foundation to offer students a chance to code their own computer science experiments to be run in space. Two augmented Raspberry Pi computers, called Astro Pis, have been flown to the International Space Station (ISS) as part of Tim’s mission. They are each equipped with different cameras and a range of sensors that the students can use in a wide variety of experiments. By making the Astro Pi available to students, they have a unique opportunity to work with the same hardware that Tim Peake is using on the ISS.

Seven winning programs, now part of the Astro Pi payload, blasted off from Cape Canaveral Air Force Base in Florida on December 6th last year. The students’ projects are incredibly creative, ranging from fun reaction time games to real science experiments, such as looking at radiation in space. Find out about the winners and their experiments here.

Tim Peake deployed the first Astro Pi in the ISS Columbus laboratory on the 2nd of February and it’s been running student code for about two weeks. The second one will be deployed on February 16th in the Harmony Node 2 module and will run Earth observation experiments, looking through the Nadir Hatch window.

After the success of the first competition, Tim is now looking for more students to write code for him to run in space. The Astro Pi Coding Challenges, launched on February 3rd, pose a specific problem to the students and asks them to solve it with code. This approach differs from the 2015 competition, where students were given an open-ended brief to come up with their own ideas for experiments. This time, Tim has a particular task in mind for them. The winners will have their code uploaded to the ISS and used by Tim on the Astro Pi computers (on a best-effort basis subject to operational constraints).

There are currently two challenges on offer, which are both music-based. The first asks students to write Python code to turn the Astro Pi into an MP3 music player, something that it was never designed for. The students will need to program the buttons, joystick and LED display to provide an iPod-like interface, so that Tim can plug in headphones and listen to music. The second challenge requires students to compose their own music using a tool called Sonic Pi. This allows music to be created using lines of code, and is a really fun and engaging way to learn to program. Tim will then use the MP3 player code from the first challenge to listen to the second challenge’s music on board the ISS.

The competition is open to all primary and secondary school-age students who are resident in the United Kingdom, and it’s supported by a comprehensive range of teaching resources that are available for free on the Astro Pi website. The deadline for submissions is March 31st.

The competition is being run across four age categories – 11 years and under, 11 to 14 years, 14 to 16 years and 16 to 18 years – with a winner selected from each for both challenges. In total, four MP3 players and a minimum of four songs will be uploaded and played by Tim in space – the most exclusive concert venue imaginable. 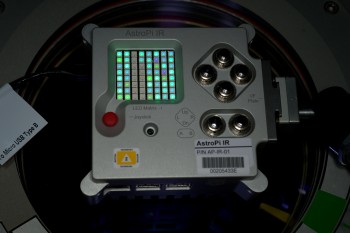 “This competition offers a unique chance for young people to learn core computing skills that will be extremely useful in their future. It’s going to be a lot of fun!”

“We are excited that the Astro Pi project is being extended to allow more students the opportunity to see their code in space. There were some fantastic ideas in the first competition and I am sure that the new challenges will see more interesting ideas be submitted.”

“Tim told us that the software for updating his MP3 player is not approved for the ISS laptops, so he’s potentially facing another four months without any new music. So there’s a practical, utilitarian purpose for having the students code this MP3 player for him. It’ll solve a real problem on the space station.”

The judging will be conducted by a panel of experts selected from industry partners that have been involved in the Astro Pi project from the start. These are UK Space Trade Association, UK Space Agency, European Space Agency, Surrey Satellite Technology, Airbus Defence and Space, CGI, QinetiQ, ESERO UK, National STEM Centre, and Space KTN.