An encounter with Klim Churyumov 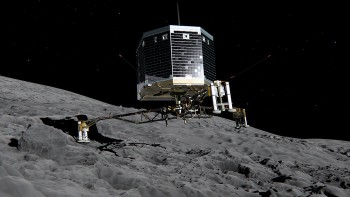 Two years ago this week, the entire world was getting ready for a historic endeavour in space: the first soft landing of a human-made probe on a comet.

On 12 November 2014, Rosetta’s lander Philae landed on Comet 67P/Churyumov–Gerasimenko, and while the landing didn’t go exactly as planned, Philae finally managed to secure itself to the nucleus and to conduct a series of scientific experiments in situ, while Rosetta kept observing the comet from a distance until the mission’s end last September.

As communicators of ESA’s science missions, we gathered at the European Space Operations Centre (ESOC) in Darmstadt, Germany, to follow Philae’s landing and report it via ESA’s web and social media. During the week, ESOC was packed with scientists and engineers from the Rosetta and Philae teams, members of the international press and a number of special guests. Among them was also Professor Klim Churyumov, who together with Svetlana Gerasimenko had discovered the comet back in 1969, and who sadly passed away last month. 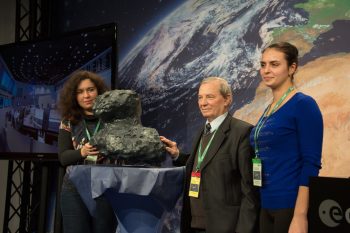 Professor Churyumov and his interpreters with a 3D model of Comet 67P/Churyumov-Gerasimenko at ESOC on 11 November 2014. Credit: ESA/C.Carreau

The day before landing – two years ago today – I had the pleasure to briefly meet Professor Churyumov and even asked him a few questions, taking down notes with the help of his interpreters. Back then, I was planning to write down a transcript of that conversation for this blog, but in the end the chance did not materialise at the time. Then recently, while going through my old notebooks, I found the notes from that brief interview and finally had some time to share them with the readers of the blog.

At the time, in November 2014, Rosetta had been at the comet for only three months, during which it had taken many striking pictures of this incredible little world. I asked Klim what were his expectations of how “his” comet would look like, and the reaction to Rosetta’s first close-up images. He said he was very amazed to discover that 67P/C-G consists of two lobes. Of course, he was not surprised that it had an irregular shape, as most comets do because of their small mass.

According to my notes and to the translation, Klim had compared Comet 19P/Borrelly to a potato, Comet 81P/Wild (also known as Wild 2) to an elongated grapefruit, and Comet 67P/C-G… well, to him it looked like a shoe! Indeed, he said the unexpected and beautiful shape of the comet nucleus reminded him of some traditional Ukranian shoes made of straw and used by local farmers. We all joked of how “his” comet was in fact a “cosmic slipper”. 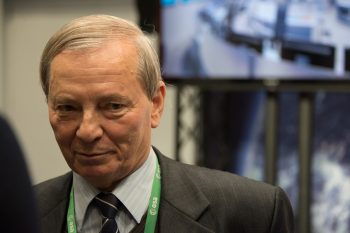 He added that the landscapes of the comet reminded him of mountain ranges on Earth, with peaks and valleys, like in the Alps or in the Carpathians, but smaller.

He also pointed out that this comet has spent most of its lifetime much farther away from the Sun than it currently does, as it was an encounter with Jupiter in 1959 that reduced the comet’s perihelion and led it to its present orbit, incidentally making it possible for Svetlana Gerasimenko and himself to discover it ten years later. As such, he thought of the comet as a time capsule, a “Greetings from the Past” message for scientists to investigate.

I also asked him about the next steps and what he’d be most looking forward to in terms of the scientific exploitation of the data from Rosetta. He was eagerly waiting for Philae’s descent and the first measurements to be performed on the surface of a comet.

He also mentioned that comets might have brought to our planet water and other molecules crucial to the emergence of life as we know it on Earth, and recalled the findings of NASA’s Stardust mission, which detected the amino acid glycine at Comet Wild 2. He was hoping Rosetta would find amino acids at “his” comet too… and many months later, it actually happened, as Rosetta detected glycine at Comet 67P/C-G.

As for water, Klim said he had no doubts that Earth’s water comes from space, and was looking forward to Rosetta’s measurements of the isotopic composition of water at the comet. In fact, that result was published only a month after our conversation, demonstrating that water at Comet 67P/C-G contains three times more deuterium than water on Earth, and fuelling once again the debate on the main carriers of water to our planet’s oceans – comets or asteroids?

Klim said he was also looking forward to the measurements of the electric and magnetic field by the Rosetta Plasma Consortium suite of sensors on the orbiter and the ROMAP instrument on Philae, as well as to the results of the Radio Science Experiment (RSI) and of the CONSERT radar experiment to probe the comet’s interior. Several studies based on data from these instruments were published on scientific journals in the past couple of years, and I hope that he had a chance to read about these interesting results.

As a final remark, he mentioned having a dream: he would have loved to be an astronaut, travel to the comet to have a walk on the surface, take some pictures and safely come back to Earth. And he was sure something like this would become possible in the future.