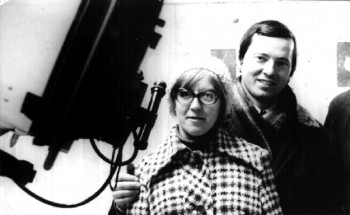 Rosetta’s comet was discovered in 1969 by two Ukranian astronomers, Klim Churyumov and Svetlana Gerasimenko, who first observed it from the Institute of Astrophysics in Alma-Ata (now named Almaty), Kazakhstan. To their delight, comet 67P/Churyumov-Gerasimenko was selected in 2003 as the destination for the Rosetta mission. Since then, they have eagerly followed the progress of the mission that is now unveiling the many facets of ‘their’ comet.

Forty-five years after the discovery, Klim and Svetlana are still active researchers in the field of cometary science. They recently shared with us the story of how they stumbled on the object that would later become – as Svetlana calls it – a ‘superstar among comets’.

As with many tales from the history of science, this was a lucky discovery.

In September 1969, the two astronomers were on an expedition to Alma-Ata to observe known comets and – hopefully – to discover new ones. Using the Institute’s 50-cm telescope, they took photographs of the night sky, observing each region twice at an interval of 20-30 minutes. This is a common technique used to reveal unknown comets or transient objects in the night sky: by comparing subsequent photos of the same patch of the sky, unexpected ‘visitors’ appear to move across the sky against the background of the fixed stars, and can be easily identified.

Those were the days of analogue photography: astronomers would coat a photographic plate with light-sensitive emulsion and expose it to the night sky to record light from astronomical sources. At the end of the observation shift, they would develop the plates and eventually, sometimes only after days or even weeks, measure the position and brightness of the celestial bodies recorded in the images and try to make sense out of them.

It was because of an incident during the processing of one of the photographic plates that Rosetta’s comet was discovered.

One of the objects that Klim and Svetlana were studying at the time was comet 32P/Comas Solà, a periodic comet that had been discovered in the 1920s. Over the course of several nights they photographed the region of the sky containing this comet. As Svetlana was processing one of these plates on 11 September, she realised she didn’t have much solution to develop the plates, but decided to process that one anyway, before preparing a fresh solution. As a result, that plate was underdeveloped.

Svetlana almost threw the defective plate away, but she didn’t. After all, a tiny splotch of light was visible at the centre, and they thought it was comet 32P/Comas Solà. Perhaps some useful information could be extracted from the good part of the plate. Little did they know how important that ‘defective’ plate would turn out to be!

In October, when the two were back in Kiev and started analysing the plates, it became clear to them that the comet imaged on the underdeveloped plate was not the one they had been aiming for – comet 32P/Comas Solà was almost two degrees away. That blotch of light at the centre was something else entirely. They had discovered a new comet – the remarkable 67P/Churyumov-Gerasimenko!

Read more details about the discovery of comet 67P/C-G, told from the perspective of both Klim Churyumov and Svetlana Gerasimenko in the profiles of the two astronomers, published on ESA’s Science and Technology website.