In the first week since the OSIRIS team launched their new Image of the Day website, we’ve seen three rather different views of Comet 67P/Churyumov-Gerasimenko.

The first image to be released (above left), taken on 10 December, shows the incredible detail of the comet’s surface from a distance of 103 km. The view focuses on the comet’s southern hemisphere and in particular captures the Wosret region on the small comet lobe (top right), and the Anhur region on the large lobe (bottom left). Particularly eye-catching are the fracture patterns in Wosret and the boulder-strewn regions in Anhur.

The second image (above right), taken on 12 December, focuses on the current state of activity of the comet. Jets are visible all along the horizon in the upper portion of the image, and also along the boundary between the lit and shadowed regions in Imhotep, towards the foreground of the image. 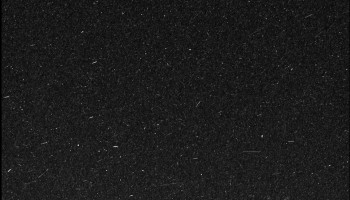 Comet dust environment on 10 December 2015. The image is a single-frame OSIRIS narrow-angle camera image and was taken with the spacecraft pointing 15 degrees away from the nucleus.

The third and very different view (left) gives us a remarkable look at the comet’s dust environment. Rosetta routinely points its camera away from the comet nucleus to monitor the coma in this way – this image was captured during a 12.5 second exposure on 10 December.

Follow the OSIRIS Image of the Day website over the Christmas break, and we’ll showcase the highlights when we return to the blog in the New Year.