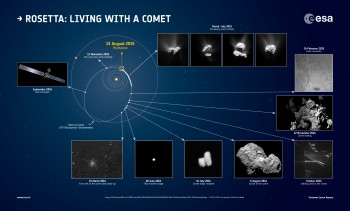 We can hardly believe we are approaching the end of yet another incredible year for the Rosetta mission, which has now spent nearly 500 days “living” with Comet 67P/Churyumov-Gerasimenko.

From dramatic close flybys to the peak of comet activity during the months around perihelion, 2015 has seen the Rosetta mission shine with scientific discovery. A slew of fascinating results have been published from both the Rosetta orbiter and the Philae lander teams in the last year, which have certainly triggered some intense discussion in the comments section on this blog!

As we did last year, we are planning to take a short break, between close of business on 18 December 2015 and 4 January 2016. During this time we don’t foresee any routine updates (aside from images that might be released via the new “OSIRIS image of the day” website), but we will of course inform you as soon as possible if something extraordinary happens. 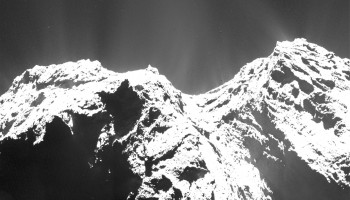 Due to the time required to review comments, the commenting function will be disabled on all posts and pages over this period – existing comments will remain, but no new comments can be submitted and added during the break. Furthermore, when we return in the New Year, the comment function will only be possible on subsequent new posts. We therefore kindly encourage you to wrap up existing conversations during this week.

It’s been a pleasure sharing the latest news with you this year and we’re delighted that so many of you are continuing to enjoy following the blog and being part of the Rosetta adventure with us here. Many thanks to our regular contributors and occasional visitors alike – we look forward to welcoming you back in the New Year when we’ll be getting ready for the mission’s greatest challenge yet: putting Rosetta on the comet in September 2016.

But for the rest of this week at least, it’s business as usual!