Watching the birth of a comet magnetosphere

Based on the press release of the Swedish Institute of Space Physics summarising the results of the Rosetta Plasma Consortium’s (RPC) Ion Composition Analyser (ICA) that are presented in the journal Science today, and on follow-up discussion with Hans Nilsson, RPC-ICA principal investigator.

The RPC-ICA instrument onboard Rosetta has been watching the early stages of how a magnetosphere forms around Comet 67P Churyumov-Gerasimenko as it moves closer to the Sun along its orbit and begins to interact with the solar wind. 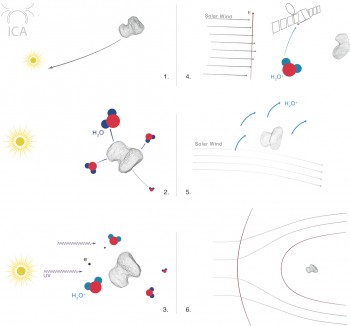 How a comet grows a magnetosphere
1. The comet approaches the Sun
2. Water molecules sublimate from the comet as it thaws
3. The water molecules are ionised by ultraviolet light from the Sun
4. Newborn ions are accelerated by the solar wind electric field and are detected by the RPC-ICA instrument
5. The solar wind accelerates the water ions in one direction, but is itself deflected in the opposite direction
Credits: ESA/Rosetta/RPC-ICA

As the comet gets warmer, volatile substances, mainly water, evaporate from the surface and form an atmosphere around the comet. The Sun’s ultraviolet radiation and collisions with the solar wind ionizes some of the comet’s atmosphere. The newly formed ions are affected by the solar wind electric and magnetic fields and can be accelerated to high speeds. When the comet gets close enough to the Sun, its atmosphere becomes so dense and ionized that it becomes electrically conductive. When this happens, the atmosphere starts to resist the solar wind and a comet’s magnetosphere is born – a region surrounding the comet that is shielded from the solar wind.

“The comet environment is a laboratory for scientists; we can see what happens when the solar wind streams through an atmosphere,” says Associate Professor Hans Nilsson at the Swedish Institute of Space Physics (IRF) in Kiruna. Hans Nilsson is responsible for the instrument Ion Composition Analyser, ICA, developed and built in Kiruna. The instrument measures positively charged ions and is one of five instruments in the Rosetta Plasma Consortium.

Hans explained that studying the interaction of the solar wind with a comet’s atmosphere in this way could shed light on how the solar wind interacted with the planets during their early formation. “In the young Solar System, the planet’s upper atmospheres were strongly heated and extended far into space. The solar wind should have streamed through the outer part of these extended atmospheres in a way that resembles its passage through the comet atmosphere for this low activity stage,” he explains.

At 67P/C-G, Rosetta’s RPC-ICA instrument detected low velocity water ions in data collected on 7 August 2014, one day after arriving at the comet at a distance of 100 km.

“It was an unambiguous signature of the comet, a clear detection of ions from the comet’s atmosphere,” confirmed Hans.

Rosetta is a unique space mission. Previous spacecraft that have studied comets have rushed past them at a great distance and at speeds of tens of kilometres per second. At the time of these previous spacecraft-comet encounters, the comet magnetosphere had been fully developed. By comparison, Rosetta is currently orbiting around 67P/C-G at a distance of just a few tens of kilometres, and at low speed. Importantly, the mission arrived at the comet in time to watch the very early stages of the magnetosphere formation.

“We are still in the early stages of analysing and modelling our data, but perhaps the energy transfer from the solar wind to the atmosphere is less efficient in removing an atmosphere than we originally thought.
As the comet moves closer to the Sun along its orbit, Hans and his colleagues will see the transition from this early phase to the growth of a well established comet magnetosphere.

“That transition is likely the most exciting part,” he says. “It can happen any day now. Every morning we keep looking at the new data which have just arrived. What will we find today?”

“Birth of a comet magnetosphere: a spring of water ions,” by Hans Nilsson et al., is published in 23 January issue of Science

Editor’s note: On previous blog entries, some of you have been discussing about the formation of the comet’s bow shock – a question I put to Hans, who says:

“We do not know for sure at what distance the bow shock is formed. At the distance we are right now [30 km from the comet] we can see that the solar wind is not shocked, and it does still permeate the comet atmosphere down to where Rosetta is located. So we do know that the magnetosphere has not formed yet, and we would at least indirectly see when it is formed. According to the models, the bow shock should form quite far away, so we would need rather large excursions away from the comet to observe it in situ.”