Near and far – CometWatch 28 March-2 April

CometWatch is back with two images, to offer a taste of Rosetta’s trajectory in the past couple of weeks.

The first of today’s entries is a 2×2 montage of NAVCAM images obtained on Saturday 28 March from a distance of 31.3 km from the centre of Comet 67P/Churyumov-Gerasimenko. These images were taken as Rosetta departed from the comet, almost seven hours after its close flyby 14 km from the surface of 67P/C-G. 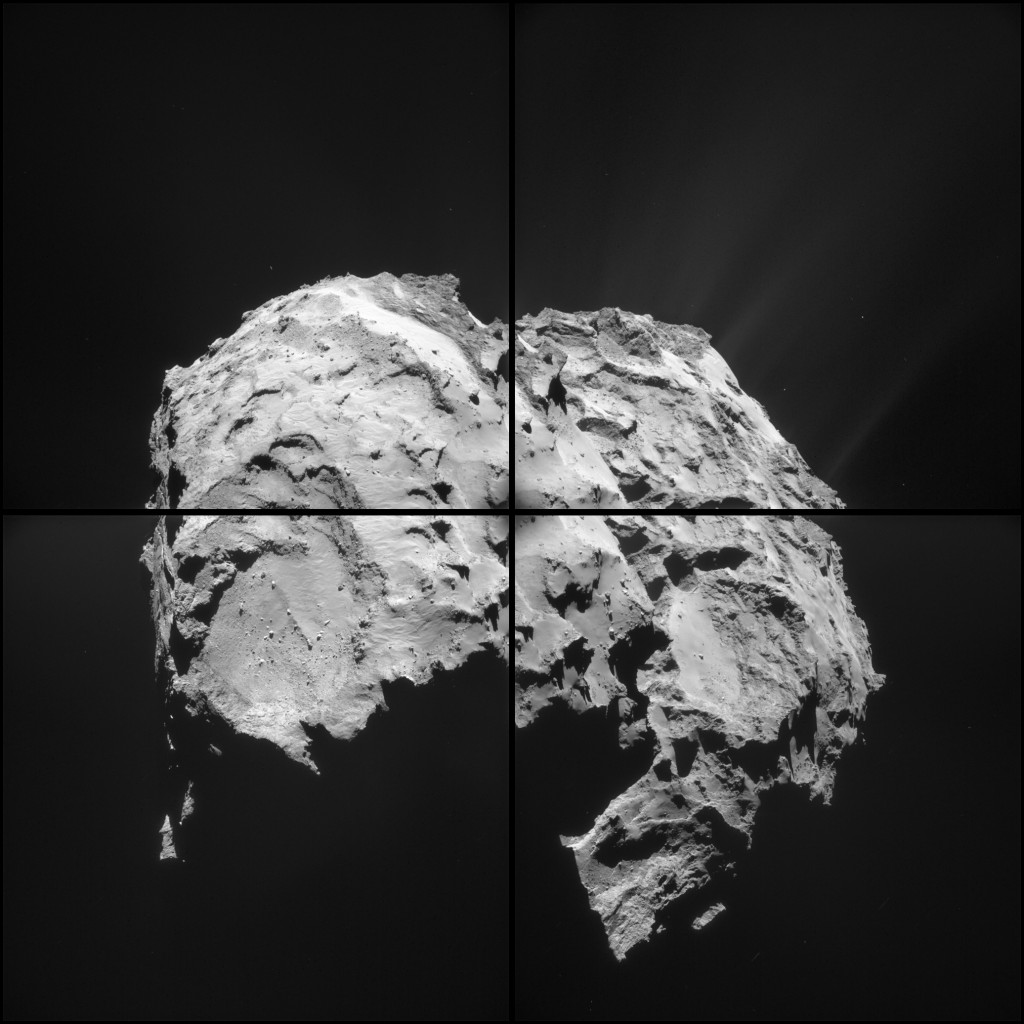 Four image montage of images taken by Rosetta’s NAVCAM from an average distance of 31.3 km from the comet centre. The scale at this distance is 2.7 m/pixel and the size of each 1024 x 1024 pixel frame is 2.7 km. Credits: ESA/Rosetta/NAVCAM – CC BY-SA IGO 3.0

In this view, the small lobe of the comet can be seen in the foreground, with the circular depression in the Hatmehit region well visible in the lower left frame. The large comet lobe is seen in the distance, with portions of the Seth and Ash regions dominating the two right frames.

After the 28 March flyby, Rosetta encountered some navigation issues that that resulted in it moving about 400 km from 67P/C-G. To bring the spacecraft closer to the comet again, a manoeuvre was successfully performed on Wednesday 1 April.

Today’s second CometWatch entry was taken on the following day, Thursday 2 April, at a distance of about 385 from the comet’s centre. 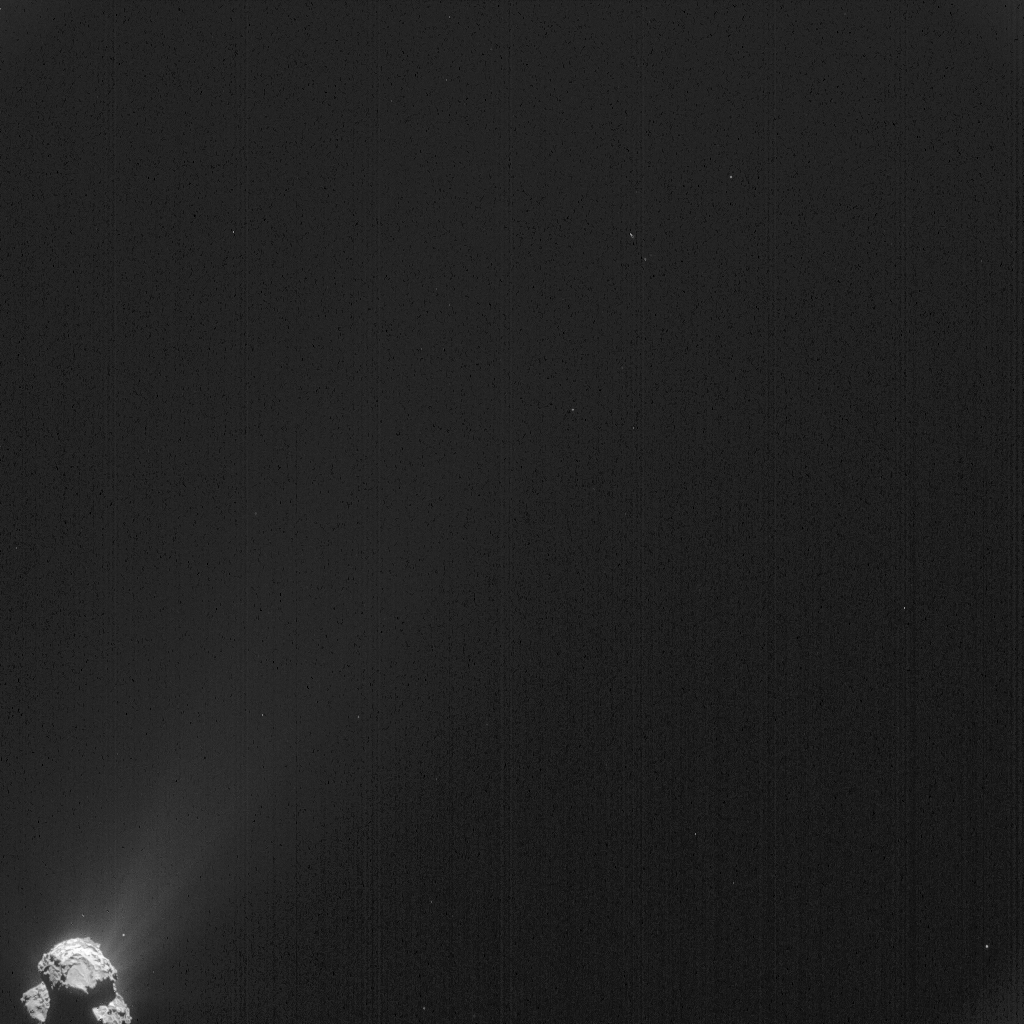 Single-frame image taken by Rosetta’s NAVCAM at about 385 km from the comet centre. The scale at this distance is 33 m/pixel and the size of the image is 34 km. Credits: ESA/Rosetta/NAVCAM – CC BY-SA IGO 3.0

The image is part of a 2×2 raster of four NAVCAM frames. Out of the four images, this one contains most of the comet’s nucleus, while at the same time providing an astonishing view of the comet’s activity, with jets of diffuse material extending diagonally across the frame.

In this orientation, the comet’s small lobe is also in the foreground, with Hatmehit well in sight. Part of the large lobe is visible in the background.

An update on the status of Rosetta and the upcoming planned trajectories will be provided in a separate blog post.

The original frames for both the montage and the single frame image are provided below: 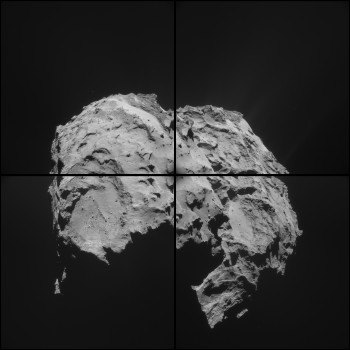 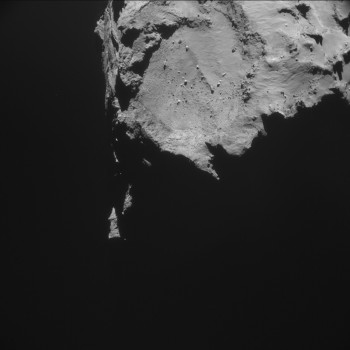 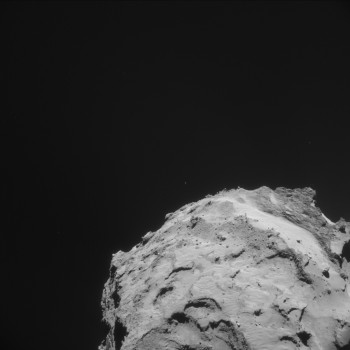 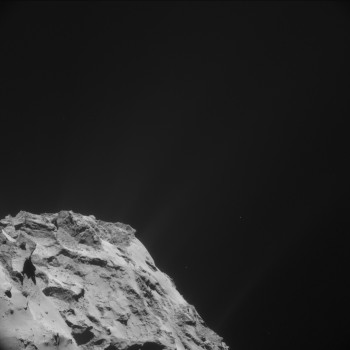 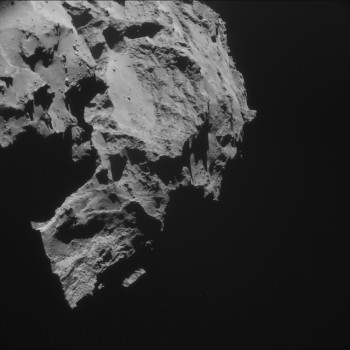