As part of the recent series of trajectories around Comet 67P/C-G, Rosetta passed within about 14 km of the comet’s surface on Saturday. Despite operational difficulties encountered during the flyby, Rosetta’s NAVCAM was able to acquire images on the way in to and shortly after closest approach. 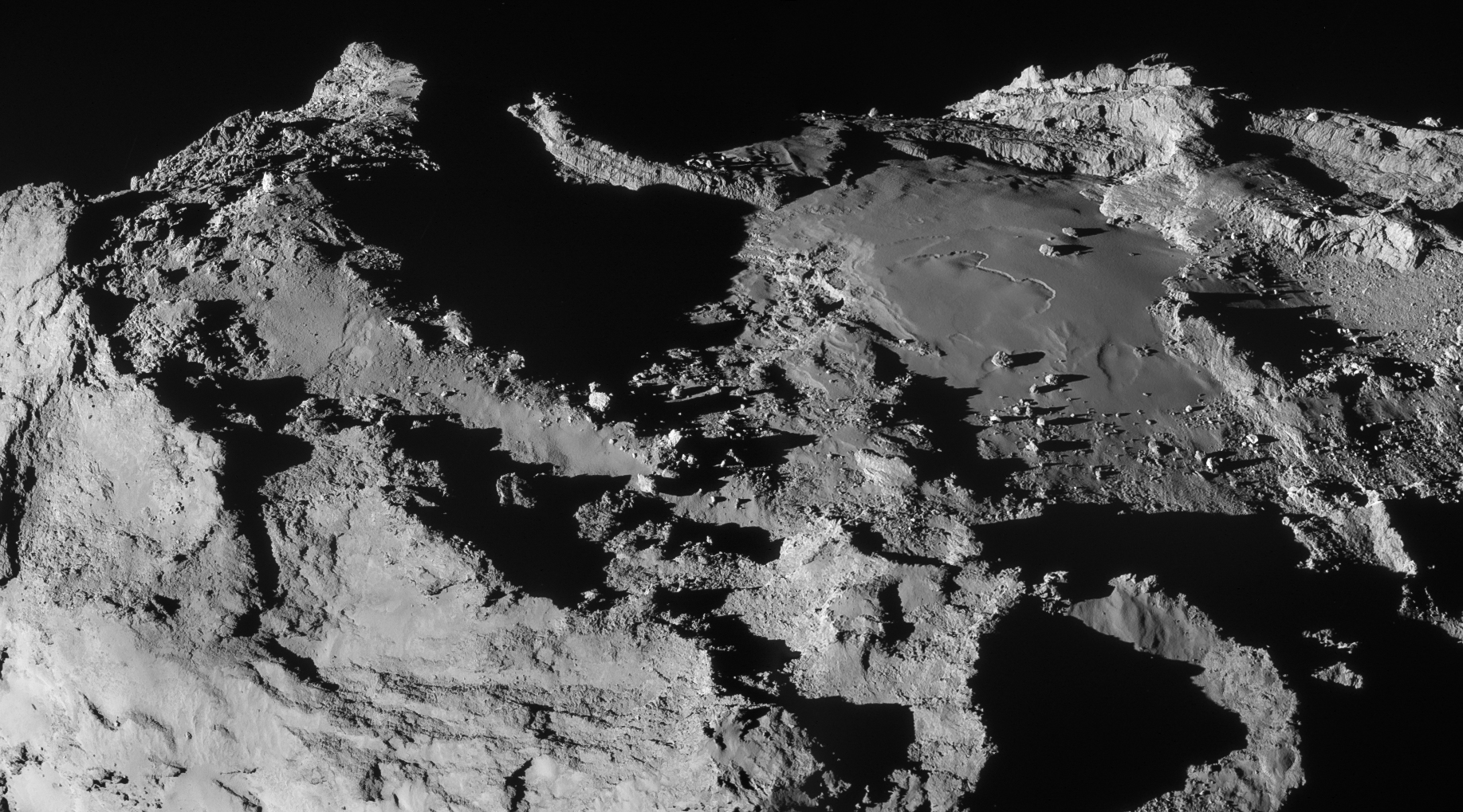 This stunning scene was created from two NAVCAM frames acquired at 19.9 km from the comet centre on 28 March. The scale is about 1.7 m/pixel and the image measures 3.1 x 1.7 km. The image has been adjusted for intensity and contrast, and the vignetting has been fixed. Credits: ESA/Rosetta/NAVCAM – CC BY-SA IGO 3.0

The approach images were acquired between 09:33 and 09:51 UT, and show an oblique view across the Imhotep region. This provides the focus for the two-image mosaic presented above, which has been cropped and rotated to highlight the impressive scenery.

Focusing on the 2×2 montage in its original orientation (below), the scene captures the boundary between Imhotep and Ash to the left. The cliffs of Hathor on the small lobe are visible in the background at the far left. Note that the top-right frame also includes the region that was imaged during the 14 February flyby at 6 km. 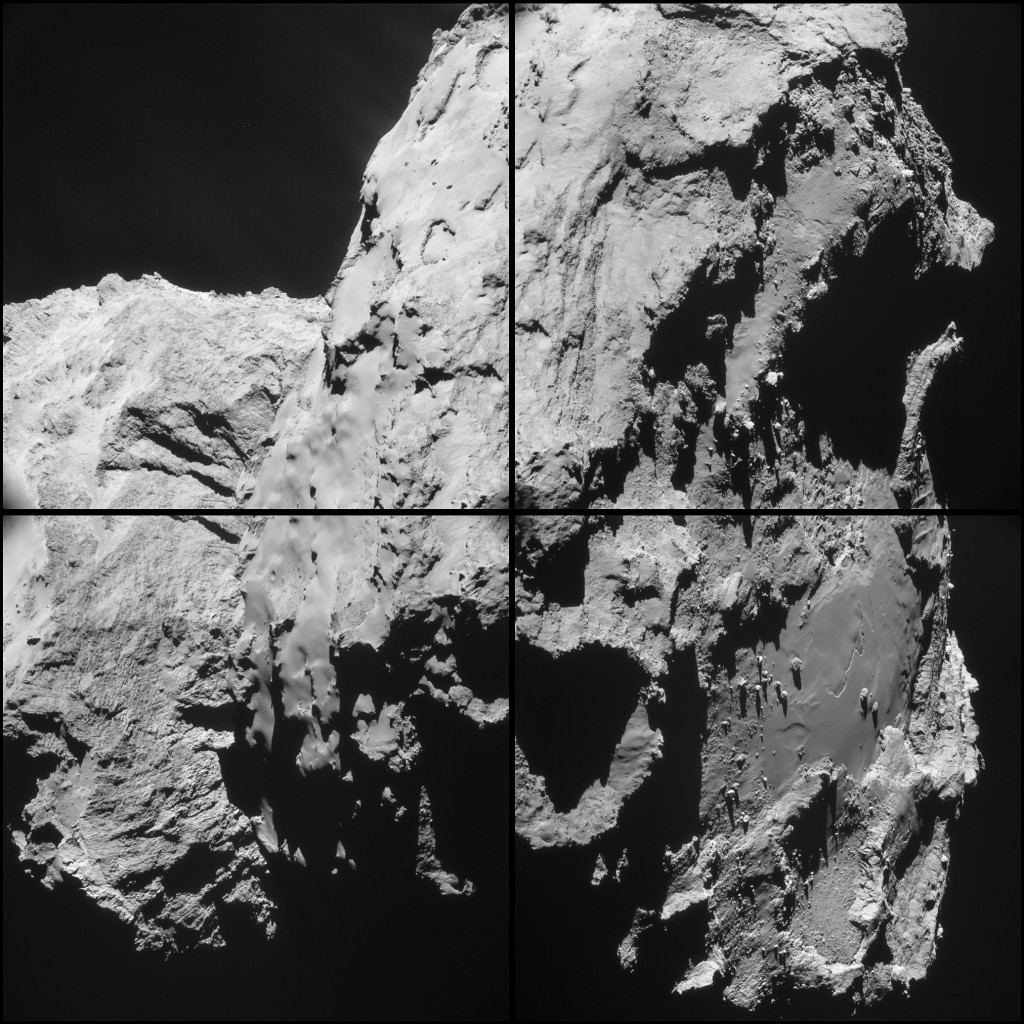 Four image montage of images taken by Rosetta’s NAVCAM from an average distance of 20.2 km from the comet centre. The scale at this distance is 1.7 m/pixel and the size of each 1024 x 1024 pixel frame is 1.8 km. Credits: ESA/Rosetta/NAVCAM – CC BY-SA IGO 3.0 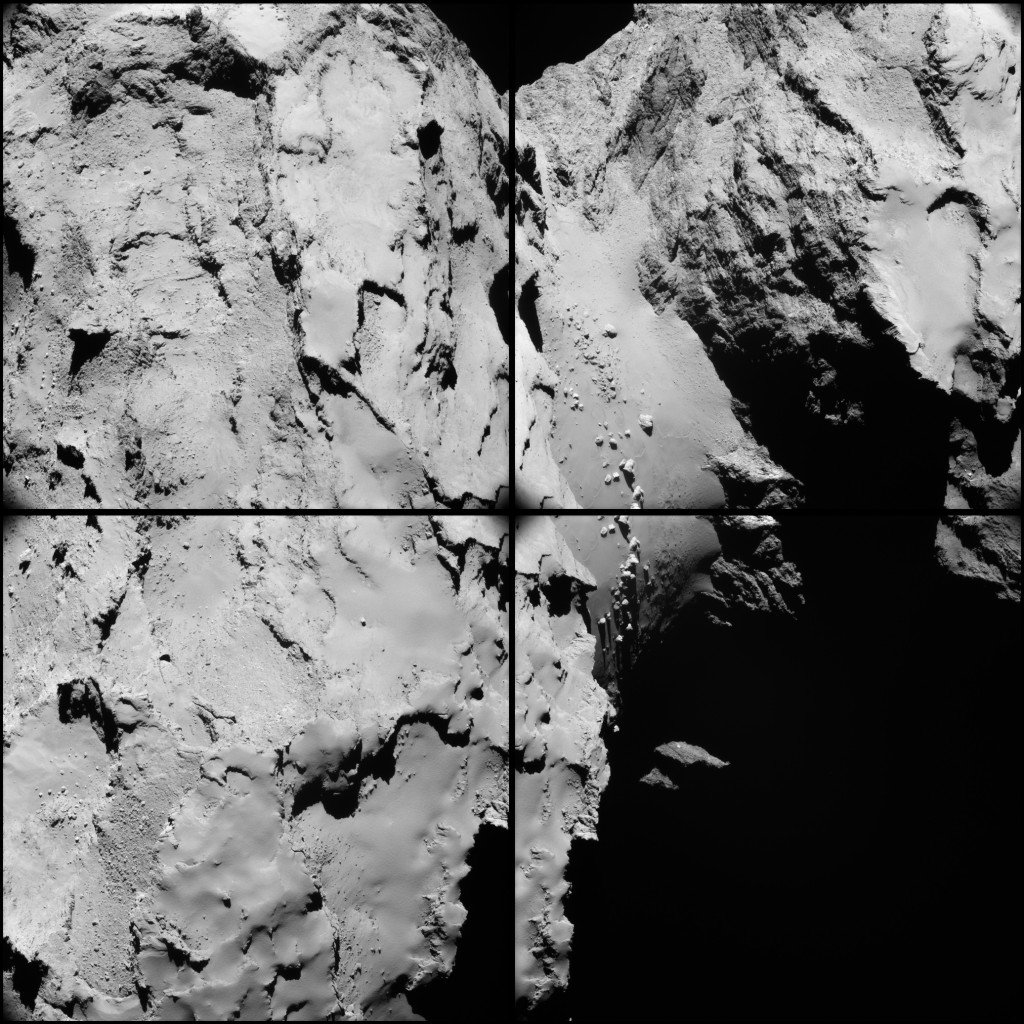 Four image montage of images taken by Rosetta’s NAVCAM from an average distance of 16.6 km from the comet centre. The scale at this distance is 1.4 m/pixel and the size of each 1024 x 1024 pixel frame is 1.4 km. Credit: ESA/Rosetta/NAVCAM – CC BY-SA IGO 3.0

In this orientation the large lobe is to the left and the small lobe to the right. The top right frame offers a particularly stunning view onto Hapi, the comet’s ‘neck’ region that is littered with boulders. This view also provides a good look at the many interesting, curved markings visible on the smooth surface.

In the same frame, further details in the cliffs of Hathor can be seen, leading up to the ‘head’ of the comet’s small lobe. The smooth region towards the right of this frame shows the transition between this smooth, presumably dust-covered portion, and the layered, exposed cliffs below.

Note that the montages have been tweaked in Lightroom for global intensity/contrast, but there have not been any local adjustments made of e.g. ghosts/vignetting or other local intensity mismatches. The four original 1024 x 1024 frames from the two image sets are provided below.

CometWatch will take a short break over the Easter weekend and will be back next Wednesday with a new view of Comet 67P/C-G. 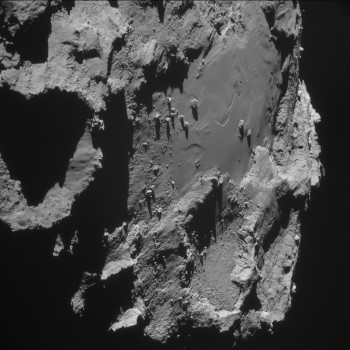 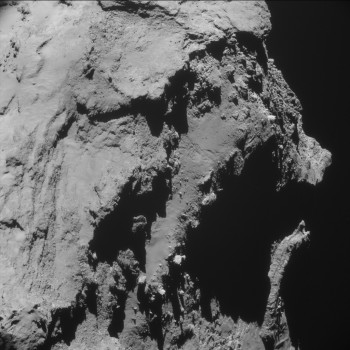 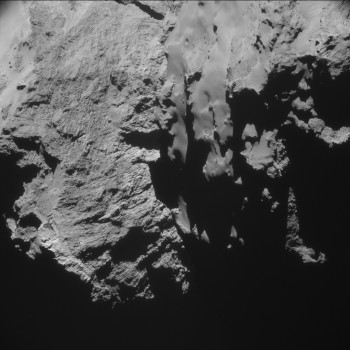 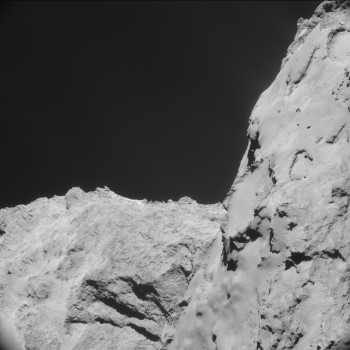 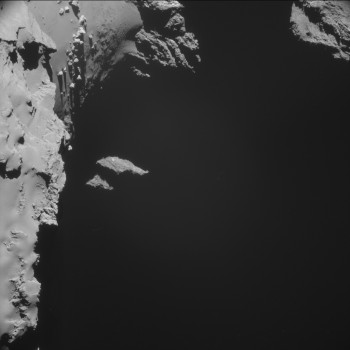 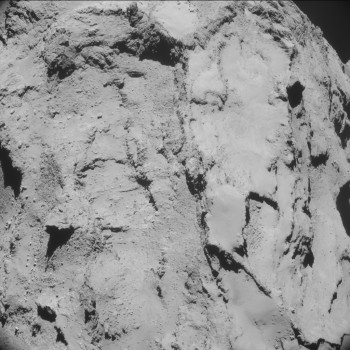 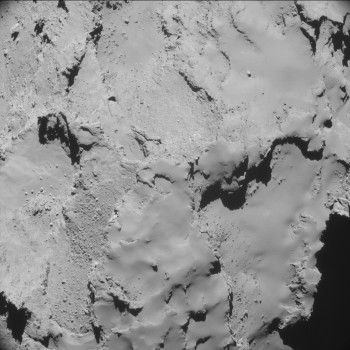