Four-image NAVCAM montage comprising images taken on 14 September from a distance of 30 km from comet 67P/Churyumov-Gerasimenko (reminder: the distance is given to the centre of the comet).

This is how the comet looked to Rosetta’s navigation camera last Sunday, when experts from ESA, DLR, and CNES were gathered in Toulouse, France, to choose the primary and backup landing sites for Philae.

Four image montage of comet 67P/C-G, using images taken on 14 September. The four images are shown separated by black borders and there is some overlap between adjacent frames, so that some features appear in more than one image. Credits: ESA/Rosetta/NAVCAM

This is a mosaic obtained by combining the four frames, rotating by 180 degrees and cropping it. Site J, the primary landing site that was chosen for Philae, is visible towards the top-middle of the smaller head at the top of the rotated image, while the backup landing site, C, is on the lower-left side of the main body.

At this distance, the resolution of NAVCAM is roughly 2.5 metres per pixel. The phase angle in the image is 61.5 degrees.

The four individual frames are also provided below (for more information on this presentation of images see the earlier blog post: CometWatch Update). As before, you are welcome to explore these images, make your own mosaics and share the links on this blog. 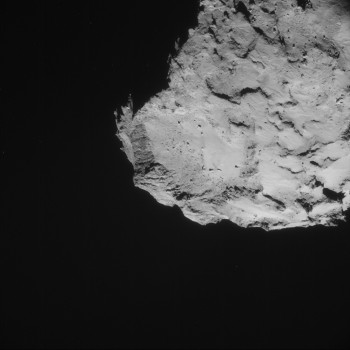