Welcome to the VMC Imaging Campaign!

NASA’s Mars Atmosphere and Volatile Evolution (MAVEN) spacecraft successfully entered Mars’ orbit at 04:24 CEST on 22 September 2014. This image was acquired by the low-resolution VMC camera on board Mars Express at 14:50 CEST on 20 September, when MAVEN was an estimated 312,000 km from Mars. Credit: ESA/MEX/VMC

Mars is approaching solar conjunction where it will be on the opposite side of the Sun from Earth; this will affect communication with the spacecraft for a period of about five weeks and so science observations have to be stopped.

For this particular Solar conjunction, running for about five weeks between 28 May and 1 July, the Mars Express team will be stopping science four days earlier than usual for operational reasons. Part of this time is to be used to run tests on spacecraft subsystems, but we have an exciting plan with what to do with the remainder! (See details via Why conjunction frees up VMC time?)

How would you like to be a scientist on a Mars mission?

We would like to offer the opportunity for about eight (final number depends on the proposed targets) schools or other youth clubs/organisations to propose observations to be performed with the VMC camera (in principle, almost any large feature on the martian surface can be imaged) and then complete and submit a project report with their results; we’ll publish them here in the MEX blog. (See official announcement  plus link to terms, conditions and the registration form here.)

So what do you need to know?

First of all, you need to understand a bit about the VMC camera. It is our most basic instrument, being basically a low-resolution webcam that was originally only to be used to record the release of the Beagle 2 lander. Since then, we have used it to take some very impressive images of Mars, its moons and atmosphere as well as other planets. Although lacking the extreme resolution of the professional HRSC camera on board Mars Express, it does allow the entire martian disk to be observed in a single image. Go through our Flickr library to get a good idea of what we can do with it.

The VMC webcam provides images of Mars having about the same quality as those provided by the ESA/NASA HUbble telescope. Image credit: ESA/Mars Express/VMC/ Humboldt Gymnasium, Vaterstetten

In fact, VMC provides images of Mars having about the same resolution and quality as those obtained by the ‘professional’ ESA/NASA Hubble orbiting observatory!

Next, you need to know a bit about the orbit of Mars Express. We don’t expect you to attempt any of the incredible mathematics that our Flight Dynamics team here at ESOC perform on a routine basis, do but you need to understand that Mars Express has a highly elliptical orbit, which – combined with the rotation of Mars – means that not all of the planet’s surface will be visible to the camera during the available observing slots during 25-27 May.

We’ll make this easier for you by supplying orbit files to use with the fantastic (and free) Celestia software. These will help you in working out which observations are possible (Editor’s note: download a RAR compressed archive here – open with any common compression tool like WINZIP – detailed installation instructions here).

Take a look at the VMC full-orbit animation, derived from Celestia, which is a great way to visualise what VMC can see during 25-27 May.

You will also need to know a bit (but not too much!) about Mars Express. Keep in mind that although we are inviting you to point Mars Express at a target of your choice (the VMC camera is fixed in position, so to point it, we slew the entire craft), we have many rules and restrictions for ensuring the safety of the spacecraft that cannot be violated.

We will take care of this within the MEX flight control team here at ESOC for you, but there are a few obvious things that you need not request, such as pointing toward the Sun or asking for two targets in quick succession (we avoid turning the spacecraft too quickly). Also, as Mars (and hence Mars Express) is almost at its furthest distance from Earth, the amount of data we can return is very limited (which is why the professional instrument payload is being switched off in the first place), and so we will not accept any long observation proposals (this also enables a larger number of short observation slots, giving as many schools or clubs as possible an opportunity to carry out observations).

Some knowledge of Mars is also important – as we assume that is at what you will be pointing VMC. In principle, you could request to point VMC away from Mars, but, as it is a low-resolution device, we don’t think you’ll see that much (we did get a misty shot of Earth one time!). We will leave this for you to research on your own. There are many sources of information on the Main ESA website, the Internet and in your library that you will want to look in to in order to come up with a good proposal.

You can also find many examples of past school and astronomy club projects completed using VMC images, many of which are excellent! (Here’s one from the Humboldt Gymnasium, Vatterstetten, Germany) The difference with this campaign is that you can request pointings at specific features from much lower altitudes than has ever been done before, so yours might be even better! 🙂

Emily Lakdawalla, from the Planetary Society, has posted online a series of excellent tutorials on working with space images, including the VMC. And you can find all archived VMC images for practice via the Mars Webcam blog and Flickr.

Mars Express is an operational mission, and considerations of spacecraft safety and the primary professional science mission always come first. We may have to amend, change, or cancel the VMC Imaging Campaign at any time, or there may be some other reason why we can’t carry out your requested observation(s). But the slots on 25-27 May are looking good and we will do our best!

So, what can you propose?

What do you think you can do? Would you like to get a close-up image of a certain feature (Olympus Mons?), or observe the whole of Mars? Are you going to work with raw VMC data or use the processed images? Can you identify certain features or landforms and explain what is going on? What caused them? We aren’t necessarily looking for the cleverest or most innovative observation proposals, but we will select eight (or so) good ones that we can fit together in to our observation window and that provide the best scientific, artistic or educational merit.

So, if you would like to take part in this extremely rare opportunity to briefly ‘take charge’ of a spacecraft around another world, make a plan and submit your proposals. Time is short and we know that there are many enthusiastic people – teachers, students, artists, young amateur astronomers and many more – out there with great ideas. Best of luck and we look forward to hearing from you!

Editor’s note: Thanks to Andy Johnstone & Michel Denis for this post

We asked Michael Khan, working at ESA’s Mission Analysis Office at ESOC, what he would select as targets for VMC. His comments and some very useful charts are below – Ed.

Here are a series of charts that indicate when/where MEX will be in relation to a selection of nine surface features (click for full size). These indicate the ground track, time, the range and the elevation for Mars Express (and hence the VMC) with respect to nine select features. 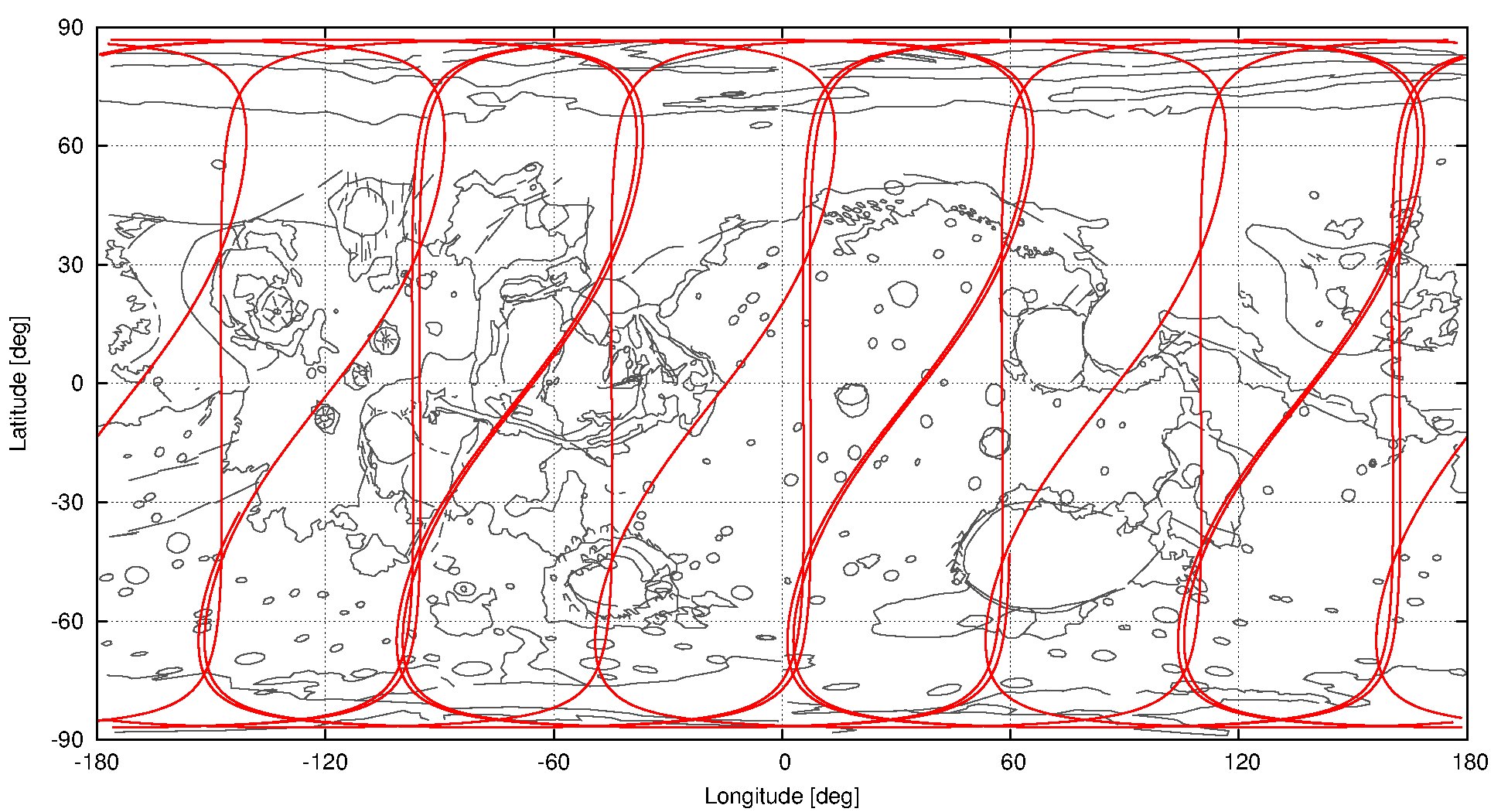 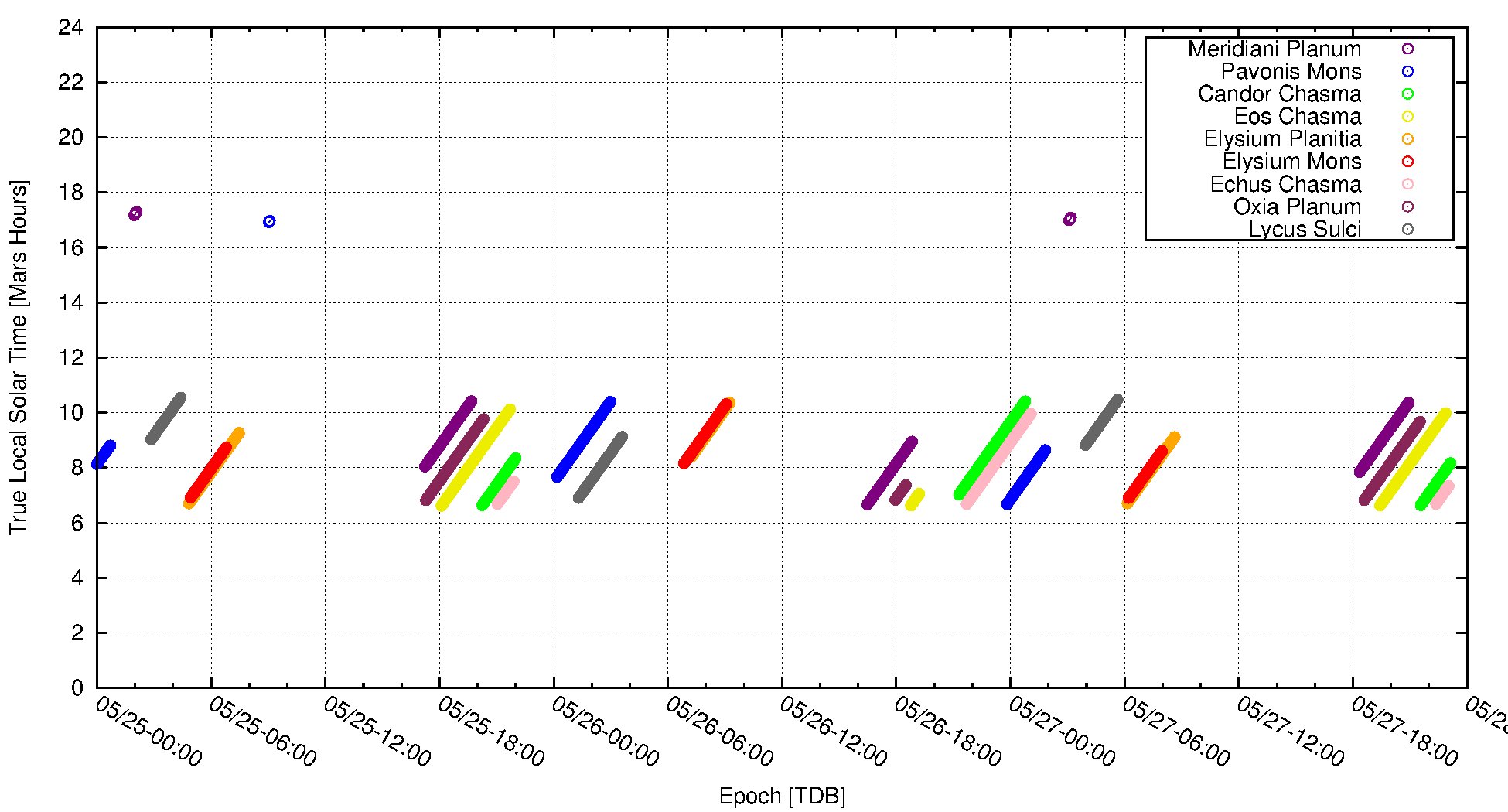 The local solar time is the current actual time at a given Mars location. In late May, it just so happens that the orbit is oriented such that most passes occur in the local morning hours, with very few passes (those that occur when the spacecraft is closest to Mars) in the late afternoon. Credit: ESA/M. Khan 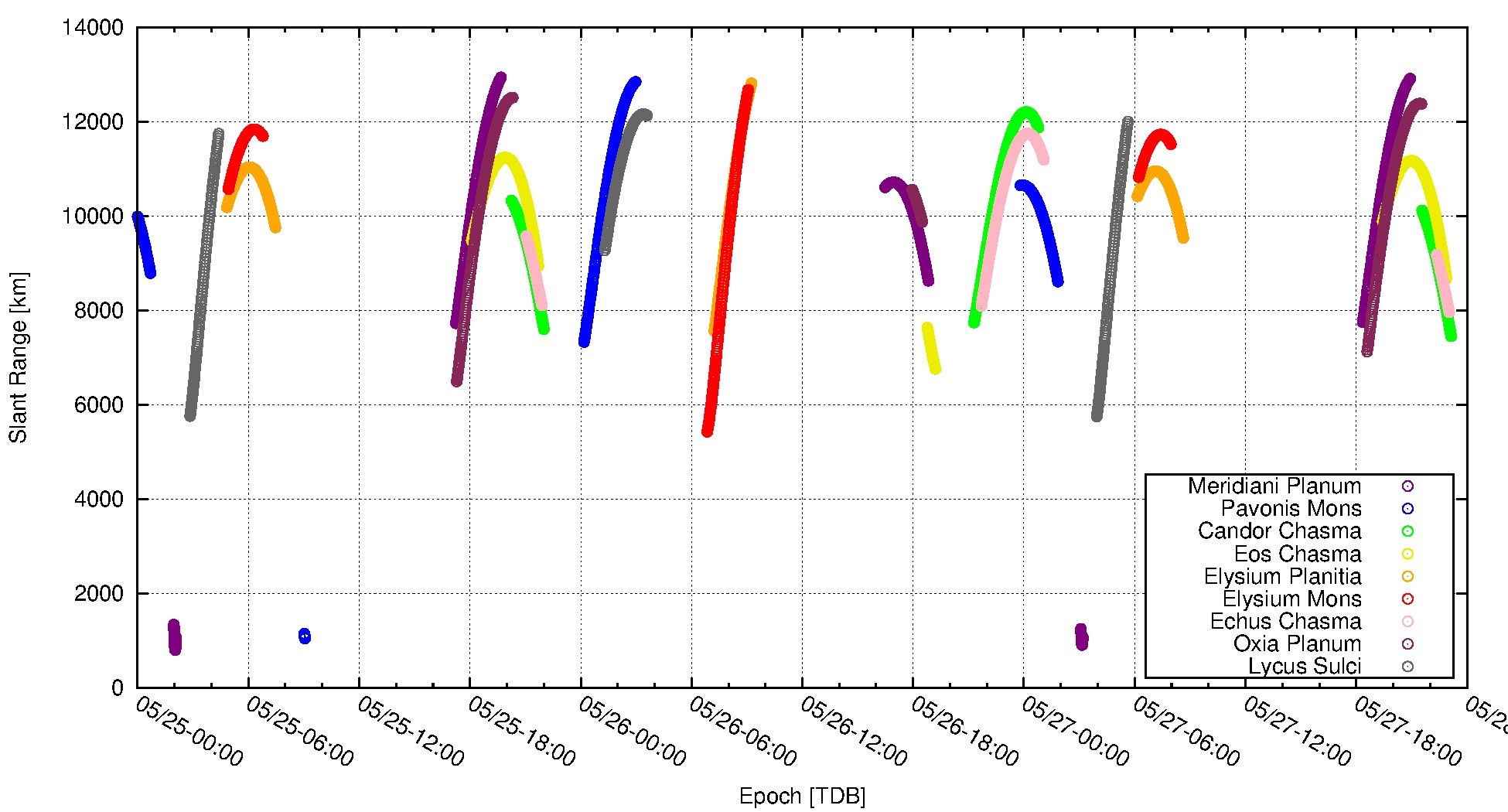 For the nine sample locations, the range (distance from the location to Mars Express) is shown for 25-27 May. Ideally, to obtain bright, high-resolution images, the elevation (see https://bit.ly/1MbUteQ) should be high and the range should be low, though this combination may be difficult to obtain. Credit: ESA/M. Khan

For nine sample locations on Mars, the elevation at which the spacecraft passes overhead, 25-27 May, is shown. Only those overflights where the Sun is up at each of the respective locations are taken into account. The higher the elevation, the better the observation conditions. For 90-deg elevation, Mars Express would be directly overhead. Credit: ESA/M. Khan

Two proposals from my side, based on my results:

There are also numerous opportunities to observe Meridiani Planum, the target location for ESA’s 2016 Mars lander, the EDM Schiaparelli. VMC imaging opportunities occur on 2015/5/26, at 15:00 UTC, and 2015/5/28, at 18:00 UTC. This also applies to Oxia Planum, currently designated as reference landing site for ESA’s 2018 Mars rover, ExoMars.