Talking with Luca (in space) 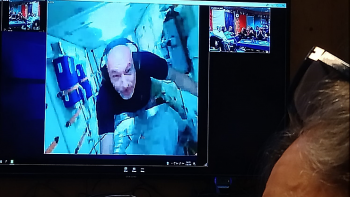 A collective rush of excitement passes through the group. We can see part of Earth through the windows of the International Space Station. Blue, green and surrounded by the faint glow of the atmosphere. Italian ESA astronaut Luca Parmitano is floating around on one side of the picture while smiling and explaining about life on the Space Station. During our half-hour video, we get to see both the toilet, his bedroom (about 0.5 m2 – it saves space to sleep “upright”), the exercise equipment, the kitchen (Luca had a bubble of juice hovering next to him for several minutes before drinking (is that an apt term for swallowing a floating bubble of liquid?), and various storage and work areas. We were even introduced to two of his American colleagues, Christina Koch and Drew Morgan. Drew spent a year in Antarctica at a US base and he told us that Concordia has a reputation of having the best food in Antarctica due to the Italian chefs.

After just over half an hour the connection was lost –  while we waited for a status from Houston mission control we resisted the temptation to shout “Houston, we have a problem!”. The room was beheld in fascination and excitement. We had some nerdy discussions – one of us was excited to see the astronauts’ puffy face live (due to the lack of gravity the fluid in the body distributes differently than usual – there is less fluid in the legs and more in the face and upper body). 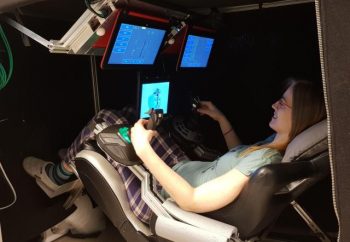 It was hard to stay calm after our talk with Luca. Our astronomer couldn’t sleep due to his enthusiasm – I even offered a sleeping place in our Soyuz simulator so he could pretend he was in space. He didn’t take up my offer but instead spent the night trying to figure out when ESA will select new astronauts (possibly in 2020 – just saying).

A video conference with the Space Station has become a tradition in Concordia. Last year, the team spoke with German ESA astronaut Alexander Gerst and Luca told us that when he was on his first trip in space, he had also been in contact with Concordia.

I send a big thank you to ESA and hope the next team will have the same great experience!

Video conferences are a fairly regular part of life in Concordia. We talk to schools around two times a week – mostly Italian schools, as the Italian Polar Institute does a lot of education outreach. We talk about Concordia and Antarctica in general – and often Nutella is mentioned (a great national pride in Italy, I learned). The talks resemble each other as many questions recur but it’s always fun to experience children’s curiosity and their sometimes quirky questions. We are also reminded that despite being experts in many fields we have a hard time remembering which end of the globe has polar bears – and which end has penguins!

It is also very refreshing to see the children sitting in shorts and summer clothes, seeing trees and the Sun shining through the windows in their classrooms. I was once a child who played around in the snow in the Danish winter and dreamed of becoming a polar scientist (yes, yes, I almost succeeded that dream).

During the year here we have been doing more conferences on climate change and climate research. We created a Facebook page on the subject this summer and it has generated interest, which is fantastic – it also has made use more aware and made us more curious. Due to the 50th anniversary of the first moon landing, several space-related video conferences have been added to the program – so we are expanding our repertoire and learning ourselves at the same time – both on exciting and relevant topics, but also on how to talk about research-heavy topics.

Isn’t it amazing (and quite interesting) how people of vastly different nationalities, spread on such a thinly populated continent, still feel a cohesion and contact?