From above to below, together 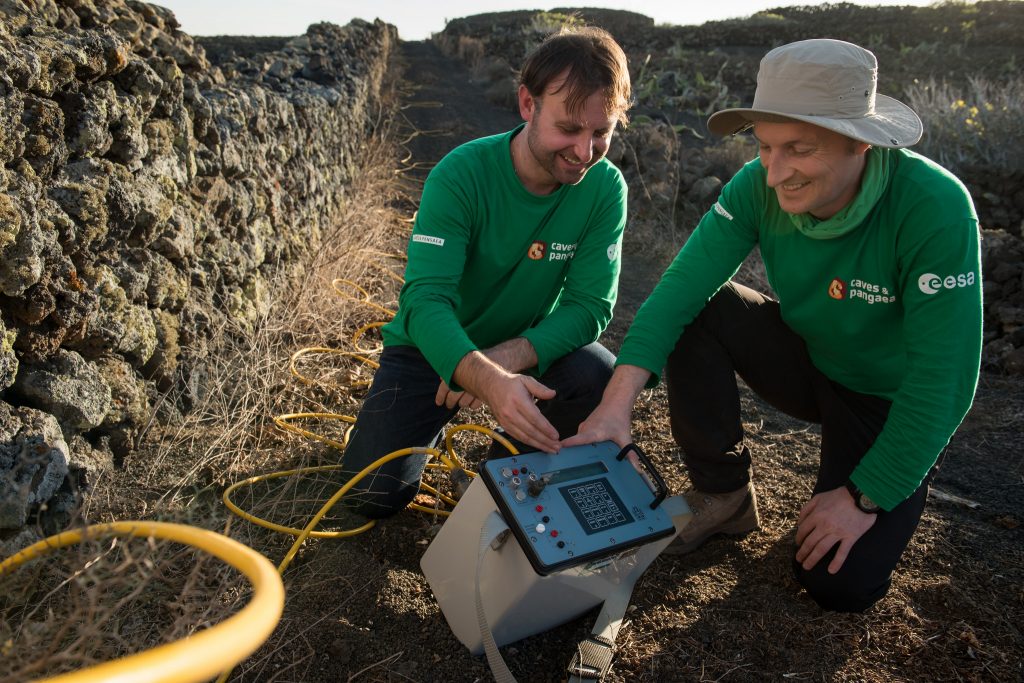 Different backgrounds, techniques and views. ESA’s journey of geological exploration, PANGAEA-X, entangled them all. Because, just like during the Apollo missions to the Moon, training astronauts in geoscience and the use of geophysical equipment on Earth is key to achieving great scientific returns.

The Augmented field Geology and Geophysics for Planetary Analogues (AGPA) experiments bring geological mapping and high-tech sensing together to understand how planets are shaped.

AGPA provides a perfect example of how synergies work for the sake of science. By combining the capabilities of both human and robotic explorers, the experiments paint a better picture of the geological context than ever before.

Among the volcanic formations of Lanzarote, Spain, the team worked at different levels to capture hidden geological clues. Experts in geology, geophysics and robotics used a variety of techniques, ranging from optical remote sensing to geophysics, alongside different types of laser scanning both on the surface and in underground cavities.

Laser scanning and photogrammetry – the science of making measurements from photographs – helped a drone reconstruct a 3D model of the terrain down to the millimetre, while a hammer-like instrument hit the rock as part of a series of seismic experiments to confirmed the existence of voids in volcanic caves.

From above to below, and down to the heart of things, here is an overview of the four AGPA experiments carried out as part of the PANGAEA-X test campaign.

From above: drone mapping

The AGPA-D experiment acquired high-resolution images and 3D mapping data of the now extinct Tinguatón volcano. A direct application of low-altitude, close-range remote sensing, the survey produced a 3D reconstruction of the crater.

“This type of survey is extremely detailed and provides a quick overview of the terrain morphology and geology,” explains Angelo Pio Rossi, Professor of Earth and Planetary Science at Jacobs University in Bremen, Germany. He gives a good overview in this earlier post.

Data from the drone contributed to the precise location of samples collected by the PANalytical experiment and enhanced the 3D mapping of a lava tube.

Lava tubes are planetary caves. Similar cave systems have been found on the Moon and Mars by probes.

From the surface: geoelectrical search 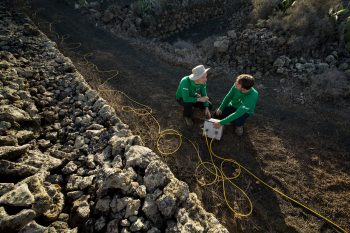 The AGPA-G experiment looked for underground features, such as cavities and lava tubes. These underground formations could one day become safe habitats for humans on other celestial bodies, as they provide a constant temperature and good shelter against cosmic radiation and micrometeorites.

“We injected electric currents into the ground to map these structures, and measured the electrical properties underground,” explains Patrizio Torrese from the University of Pavia, Italy.

The results revealed the presence of large underground cavities – up to 15 m wide – and provided new insights on the Corona lava tube system. The experiment proved that the geoelectrical probing of lava tubes from the surface is an efficient and powerful detection tool.

From inside: laser scanning 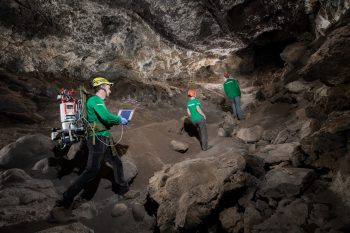 To do this, ESA astronaut Matthias Maurer wore a backpack equipped with a laser scanner. The device rotated every four seconds as Matthias freely explored the site, and measured 90 000 points in real time. Using a laptop, Matthias monitored the scanned 3D map as it was created. The backpack is also able to take colour images if fixed to the ground.

Results confirmed the high speed of data acquisition and the level of detail of the AGPA-L backpack could achieve. The system provided a very accurate reconstruction of the cave’s structure.

At the heart: seismic monitoring

AGPA-S performed passive and active seismic experiments in order to identify lava tubes. By installing an autonomous station the team was able to monitor seismic activity, including signals associated with local volcanoes as well as those from the mid-Atlantic ridge and African-Eurasian plate boundary.

“It was a great opportunity to perform experiments in collaboration with other scientific teams and local geotechnical experts,” says Gianluigi Ortenzi, from the Institute of Planetary Research of the German Aerospace Center (DLR). 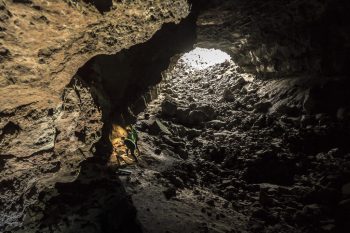 Hitting the rock in a lava tube. Credits: ESA–A. Romeo

Scientists from the different teams combined seismic research with the geoelectrical experiments to characterise underground structures, while the SPLIT hammer triggered an impulse that was successfully traced by the stations – this is similar to lunar seismic measurements performed by Apollo astronauts.

The use of the “hammer” as an impulse trigger could lead to new concepts in seismic experiments. This would be particularly useful where there are constraints around the weight and volume of scientific equipment.

“There is still lot of analysis required to fully understand the seismic noise generated by such lava tubes. We want to know more about their sounds,” says Vikram Unnithan, Professor of Geoscience at the Sciences Jacobs University Bremen, Germany.