We got in contact with Nicole Gerlach from the Institute for Experimental Dermatology at Witten/Herdecke University, who is leading the Skin-B experiment and asked her to tell us about Skin-B:

Astronauts have often reported that their skin deteriorates during long stays in space. A first skin physiological experiment in space was performed on the skin of an astronaut during the Astrolab-Mission from July to December 2006 called Skin A.

The skin’s surface, epidermis and dermis were analysed before, after and during the mission. In addition the same tests were repeated a year later with the astronaut on Earth. During the mission a control area on the astronaut’s skin was treated with a skin-care product. 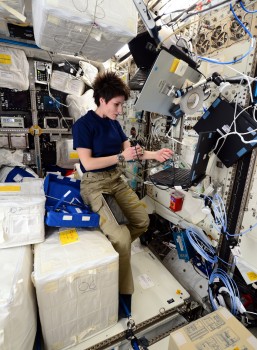 We launched the Skin-B project in 2011 to validate these results with more astronauts. New experiment hardware was made space-worthy by German company Kayser Threde and qualified for use on the International Space Station before it was transported to the Station on a six-hour spacecraft flight. Three other sets are used in ground applications.

So far, data from the Skin-B study are based on a complete set of measurements taken before, during and after a mission. We now have data from four astronauts from a total of six, Tim Peake is number five.

The data and status reports are sent to us by the Danish Aerospace Medical Centre of Research. The first data for each astronaut are downlinked after their first session to confirm that the readings are performed successfully. The complete set of data are then received at the end of the mission. For security reasons the data is encrypted.

If we confirm that an astronaut’s skin ages quicker in space we would have to take this into account when humans explore our Solar System. Finding ways to counteract the accelerated aging of the skin would be important research for the future. The goal is to develop a computer model of how skin ages. Results from Skin-B will improve the model and our understanding of how the skin develops, adding to our knowledge of how to protect people’s skin on Earth as well as in space.