Today’s CometWatch entry features a NAVCAM image of Comet 67P/Churyumov-Gerasimenko taken by Rosetta on 30 May from a distance of about 6.5 km from the surface. 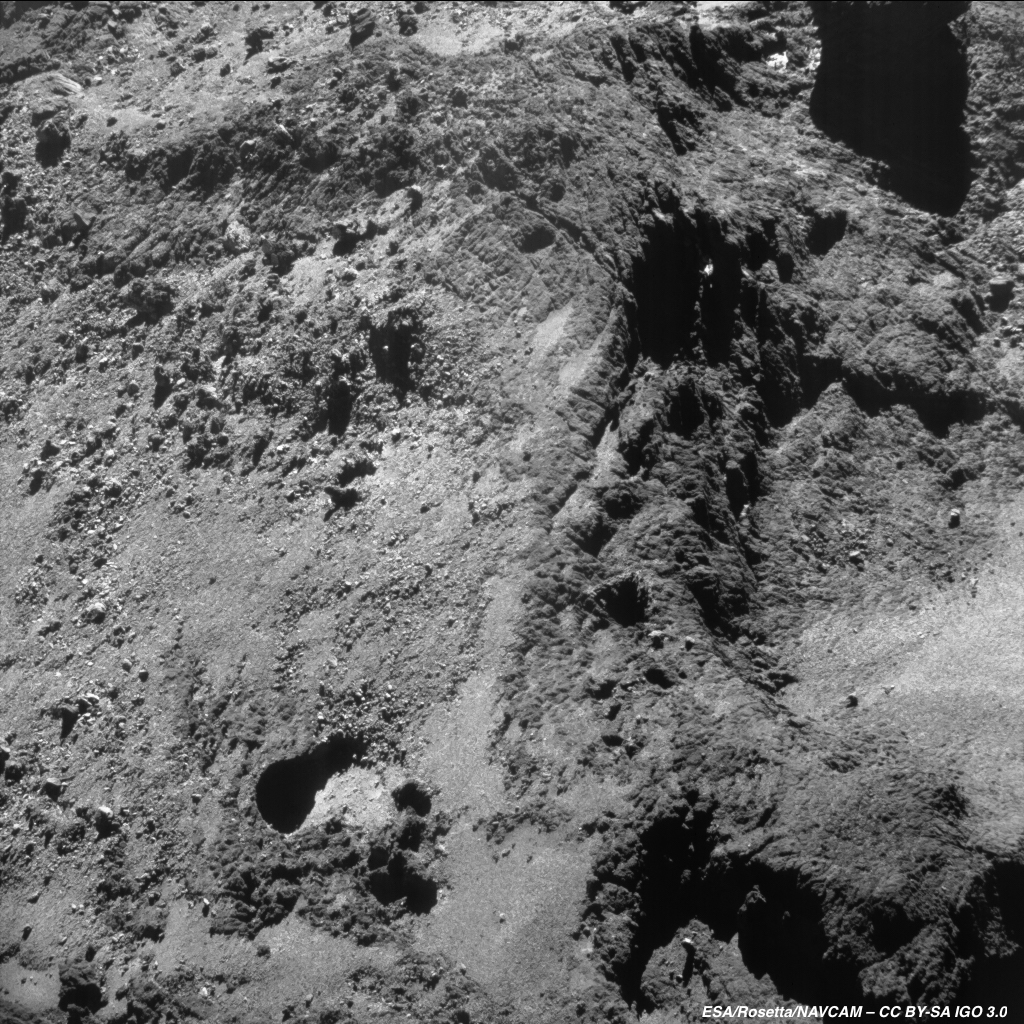 Enhanced NAVCAM image of Comet 67P/C-G taken on 30 May 2016, 7 km from the nucleus centre (about 6.5 km from the surface taking into account the comet’s orientation and inclination with respect to the spacecraft). The average scale is 0.55 m/pixel and the image measures about 570 m across. Credits: ESA/Rosetta/NAVCAM – CC BY-SA IGO 3.0

The image captures the boundaries between Imhotep (the smooth region to the right), Bes (left) and Khepry (top and centre) on the large comet lobe. It encapsulates a wide variety of different terrains in a relatively small area, from smooth patches to cross-cutting fractures on exposed walls, and to boulders of various shapes and sizes.

The OSIRIS team also released a new image from the wide-angle camera this week (below), captured on 1 June when Rosetta was 8 km from the comet nucleus. It features part of the fractured Bastet and Wosret regions on the small lobe in the foreground, with the large lobe in the background (and much of the neck region in shadow in between). 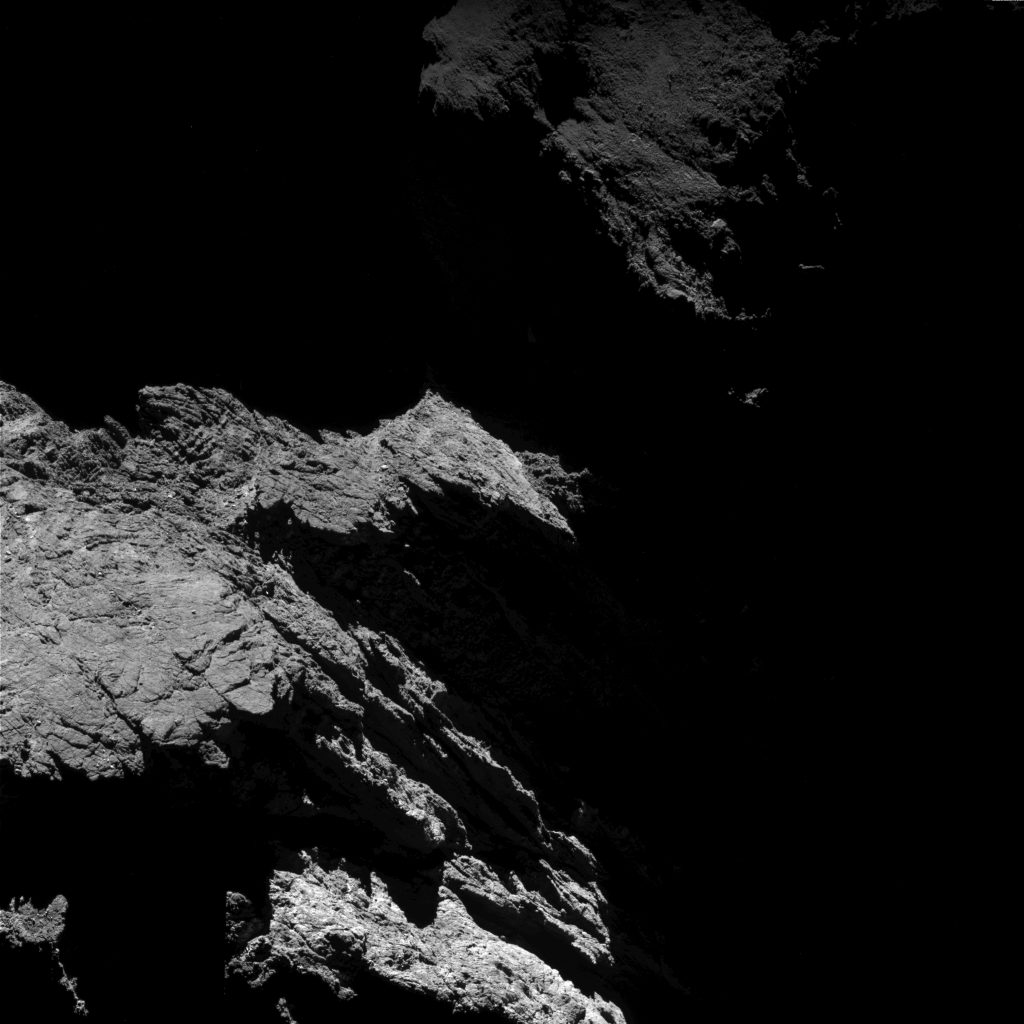 OSIRIS wide-angle camera image taken on 1 June 2016, when Rosetta was 8.4 km from the centre of Comet 67P/C-G. The scale is 0.79 m/pixel. Credits: ESA/Rosetta/MPS for OSIRIS Team MPS/UPD/LAM/IAA/SSO/INTA/UPM/DASP/IDA

Meanwhile an image from the narrow-angle camera (below), taken later in the day on 1 June from a distance of about 20 km, reveals the incredibly dusty nature of the comet. It acts as a reminder of the challenging conditions Rosetta is facing flying close to the nucleus, even many months after the comet’s most active period around perihelion (13 August 2015), the closest approach of the comet to the Sun along its orbit. 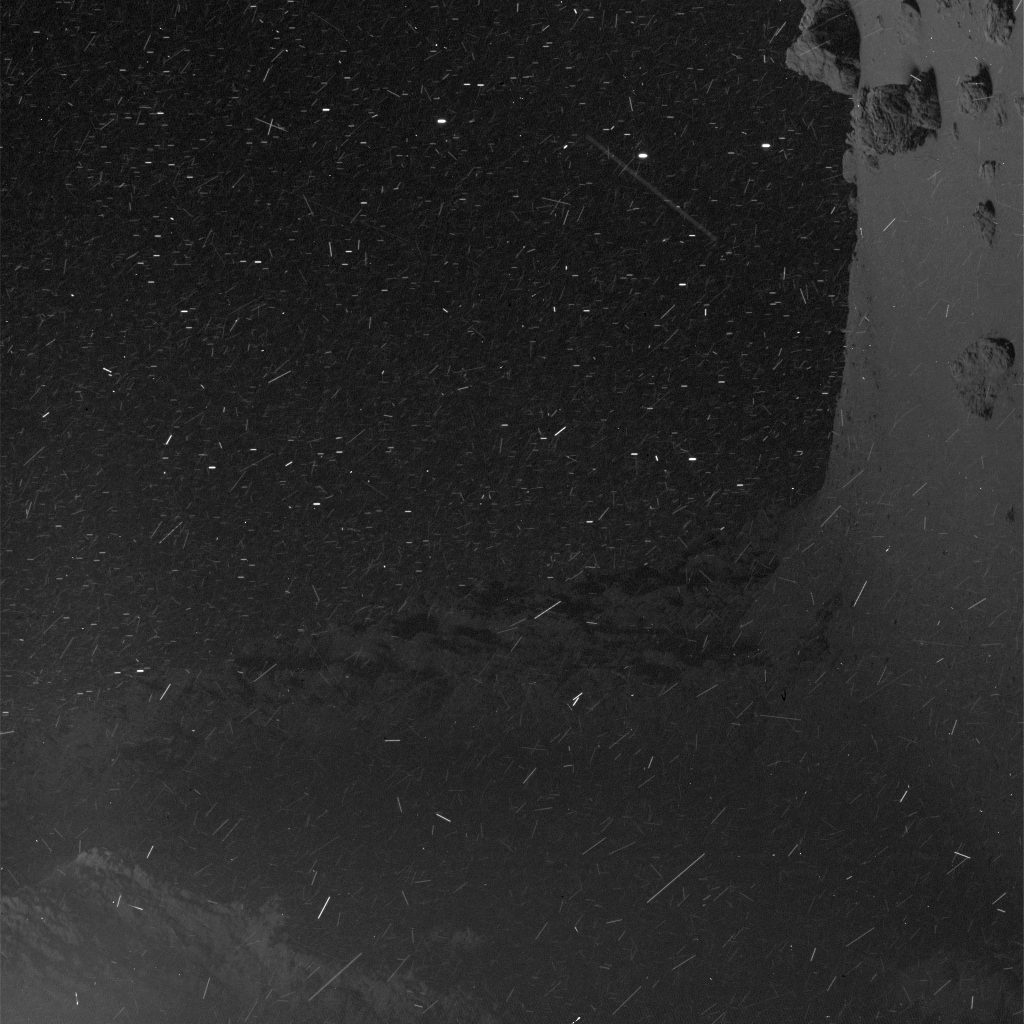 OSIRIS narrow-angle camera image taken on 1 June 2016, when Rosetta was 20 km from the centre of Comet 67P/C-G. The scale is 0.36 m/pixel. The exposure time of the image was 12.5 seconds, allowing the dust grains to be imaged as they moved in front of the camera’s field of view. Credits: ESA/Rosetta/MPS for OSIRIS Team MPS/UPD/LAM/IAA/SSO/INTA/UPM/DASP/IDA

The image also captures some impressive details of the neck region of the comet, in particular the fractured boulders that scatter the otherwise smooth surface of Hapi. The rugged cliffs of Hathor on the small comet lobe are also hinted at to the left of the image.

The images featured in this post were captured after Rosetta experienced a safe mode event over the weekend, which was triggered by the spacecraft’s star trackers being confused by comet dust when it was flying ~5 km from the comet surface. The spacecraft has since been recovered and is en route to its planned 30 km orbit.

The original 1024 x 1024 pixel image from today’s NAVCAM CometWatch entry is provided below: 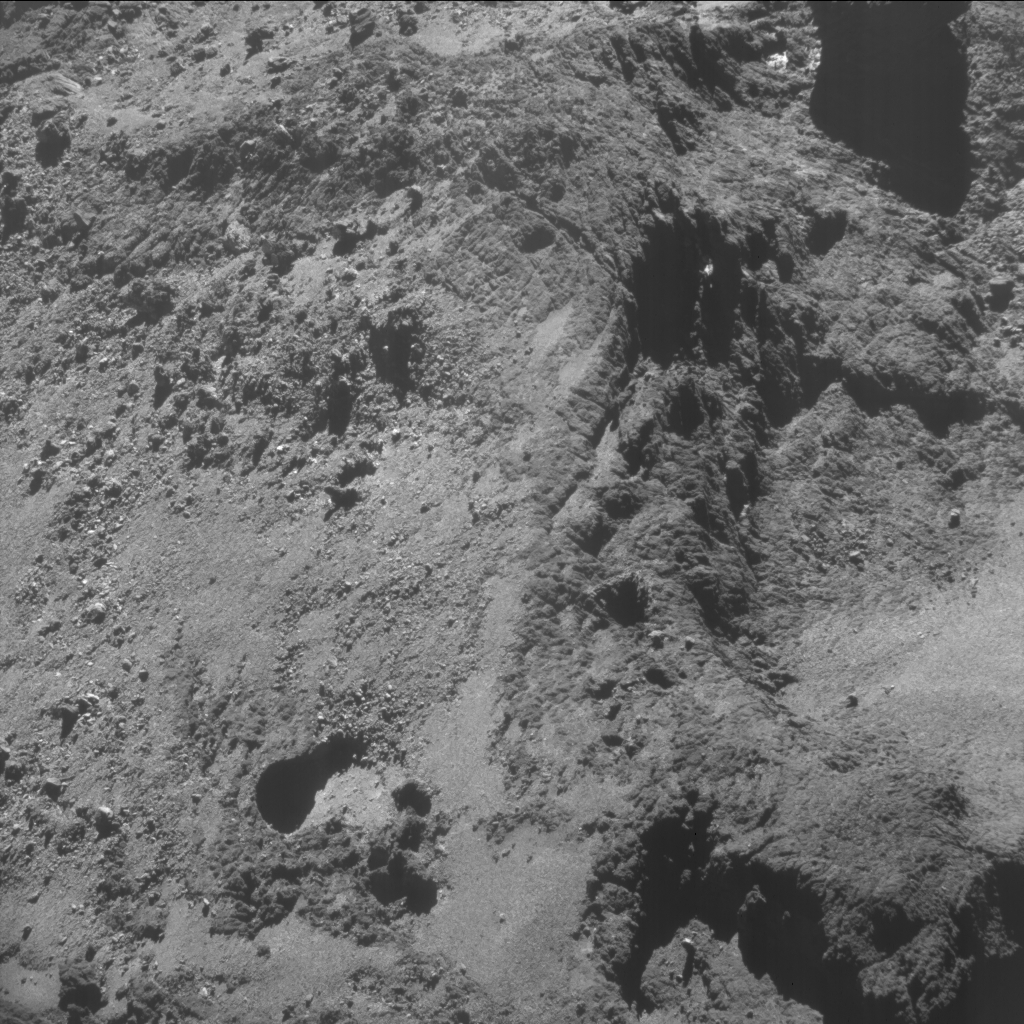