Over the weekend, Rosetta experienced a ‘safe mode’ event 5 km from the surface of Comet 67P/Churyumov-Gerasimenko. Contact with the spacecraft has since been recovered and the mission teams are working to resume normal operations.

“We lost contact with the spacecraft on Saturday evening for nearly 24 hours,” says Patrick Martin, ESA’s Rosetta mission manager. “Preliminary analysis by our flight dynamics team suggests that the star trackers locked on to a false star – that is, they were confused by comet dust close to the comet, as has been experienced before in the mission.” 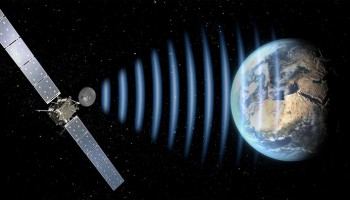 This led to spacecraft pointing errors, which triggered the safe mode. Unfortunately the star trackers then got hung in a particular sub mode requiring specific action from Earth to recover the spacecraft.

“After we lost contact, we sent commands ‘in the blind’, which successfully tackled the hung star tracker issue and brought the spacecraft back into three-axis stabilised safe mode, and we now have contact with the spacecraft again. However, we are still trying to confirm the spacecraft’s exact position along its orbit around the comet – we only received images for navigation this morning, the first since Saturday.”

As is normal during an event like this, extra ground tracking station time was requested to provide additional support for recovering the spacecraft. The regularly scheduled Rosetta tracking slot using ESA’s New Norcia deep space station in Australia on Sunday was extended, with time reallocated from Mars Express operations. The blind commanding was done from New Norcia, and later, ESA’s Cebreros deep space station in Spain was also used to support the recovery. 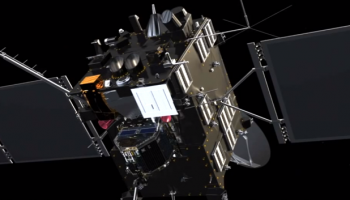 Rosetta’s star trackers are marked here in red (above Philae in this pre-seperation artist impression). Part of the high gain antenna can be seen in the background. Image credit: ESA/ATG medialab.

Operating close to the comet means that the spacecraft is surrounded by a lot of dust. Even though the comet’s activity has diminished significantly since passing through its closest point to the Sun along its orbit last August, the environment is still dusty enough that the star trackers can occasionally mistake comet debris in its field of view for stars. 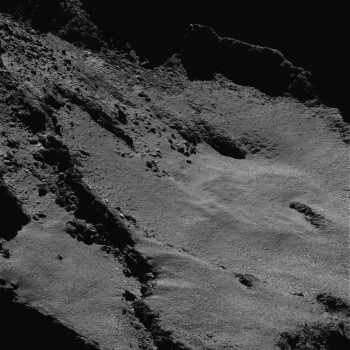 OSIRIS narrow-angle camera image taken in the morning of 28 May 2016 (many hours before the safe mode) when Rosetta was 7.05 km from the centre of Comet 67P/Churyumov–Gerasimenko. The scale is 0.13 m/pixel. Credits: ESA/Rosetta/MPS for OSIRIS Team MPS/UPD/LAM/IAA/SSO/INTA/UPM/DASP/IDA

What happens next?
As usual with a safe mode, the science instruments are automatically switched off, allowing the spacecraft operators to take the necessary steps to fully recover the spacecraft before resuming science operations. Prior to the safe mode, the plan for this week was to move into 30 km orbits around the comet on Wednesday 1 June. The team still hopes to meet this target and be able to resume normal operations by then.

Update 2 June: The transition to the 30 km orbit started as planned, yesterday morning, with an orbital correction manoeuvre to bring Rosetta to 30 km by late Friday night (the orbit insertion manoeuvre is planned for 01:40 UTC Saturday). The spacecraft’s instruments are also now back in science operations mode.

The challenges ahead
The dramatic events of the weekend are a stark reminder of the dangers associated with flying close to the comet, and highlights the risks the spacecraft will face during the final few weeks of the mission as it descends even closer to the comet.

“The last six weeks of the mission will be far more challenging for flight dynamics than deploying Philae to the surface was in November 2014, and it is always possible that we could get another safe mode when flying close to the comet like this,” says Sylvain.

“Although we will take more risks nearer to the end of the mission, we’ll always put the spacecraft safety first.

“However,  the very final sequence where Rosetta makes a controlled impact on the surface of the comet should not be affected by such star tracker issues as we plan to take them out of the attitude and orbit control system loop.”

The team will also consider taking the star trackers out of the loop when required in the last weeks of the mission.

Details of Rosetta’s final descent will be provided soon. The provisional plan is to target the small lobe close to Philae’s original planned landing site at Agilkia, most likely on 30 September.