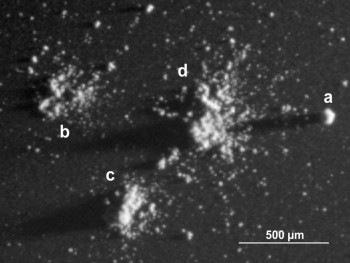 Diversity of particles seen on a small area on one single target. This image section measures 2.5 mm across, with light coming from the right. Examples of a compact particle (a), a shattered cluster (b), a glued cluster (c) and a large rubble pile (d) are seen in this small area.

The grains collected from 11 August 2014 – 3 April 2015 across nine 1 cm^2 targets, when the comet was moving towards the Sun along its orbit from about 3.5 to 2 AU, provide the focus for a detailed study outlined in a paper published this month in the journal Icarus. The paper, led by Yves Langevin of the Institut d’Astrophysique Spatiale at CNRS/University of Paris-Sud, France, describes the key characteristics of the different grain families imaged under the COSIMA microscope, the COSISCOPE.

The images reveal the particles are extremely diverse at scales of just a few 10s of micrometers (μm) to several 100 μm. The grains were characterized according to factors such as the complexity of its appearance and its height above target – determined by analysing its shadow –, which in turn is related to strength of particle.

In general, the dust families can be divided into compact particles or clusters, with the cluster group further subdivided into shattered clusters, glued clusters and rubble piles. The clusters are differentiated based on the different size distributions of the components, their spatial relationship on the collection plate, and the existence or not of any connecting matrix.

The different grain families are described below, including reconstructed anaglyph images made by combining an image at the nominal position (red) and an image obtained by shifting the target by 4mm away from the LED (blue). The particles follow a naming convention based on COSIMA team members and other Rosetta mission team colleagues.

(Note: the credit line for all images is: ESA/Rosetta/MPS for COSIMA Team MPS/CSNSM/UNIBW/TUORLA/IWF/IAS/ESA/BUW/MPE/LPC2E/LCM/FMI/UTU/LISA/UOFC/vH&S/ Langevin et al (2016))

Compact particles
Compact particles are defined as those with well-defined boundaries, more-often-than-not found without any related smaller ‘satellite’ particles. They have the longest and best-defined shadows of all the collected particles, but their direct contact area with the target is often small. Sometimes the grains have been seen to move during analysis, but they still maintained their shape, indicating a high cohesive strength.

Examples of compact particles known as Nick (top), Kerttu (middle) and Julie (bottom). In the images showing Kerttu, the small particle above the scale arrived at a different time to Kerttu, and is therefore unrelated. Both images for Kerttu are anaglyphs taken under different lighting conditions, while for Nick and Julie only the right hand image is an anaglyph.

Clusters
Clustered particles exhibit well-defined sub-components and depending on the size distribution, height and relationship between the components, can be further sub-divided into three sub-classes: shattered, glued and rubble piles.

Large cluster Jessica has a complex structure and low height (40 μm), typical of a shattered cluster, but its fine-grained texture and large number of small outliers is typical of ‘rubble pile’ clusters. It is likely intermediate between the two categories.

Glued clusters
Glued clusters comprise relatively well-defined particles with an overall complex structure including sub-components which appear to be linked together by a fine-grained matrix, giving the appearance of a smooth surface texture. Their heights are usually low compared with the base area of the cluster, suggesting that the connecting matrix has not been able to maintain the shape of the particle as it impacted onto the target. 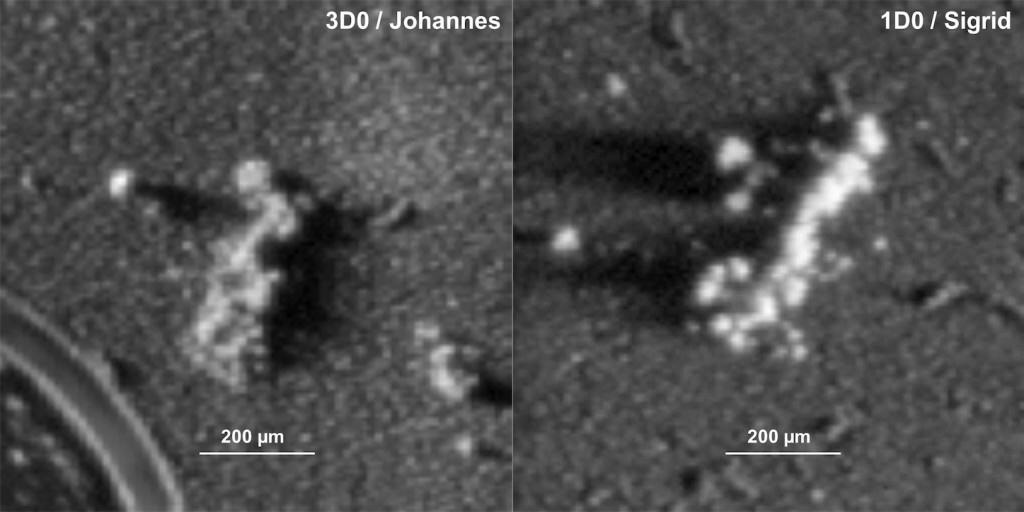 Glued clusters Johannes and Sigrid. They both have a relatively low height compared to their base size, suggesting that the connecting matrix was not able to maintain shape of particle.

Rubble piles
Rubble piles are characterized as clusters composed of very small components. They typically have a flattened conical pile appearance with small outliers indicating that, contrary to glued clusters, the constituents are not strongly connected to a matrix. They are also easily disturbed by the instrument’s ion beam used for targeted analyses. 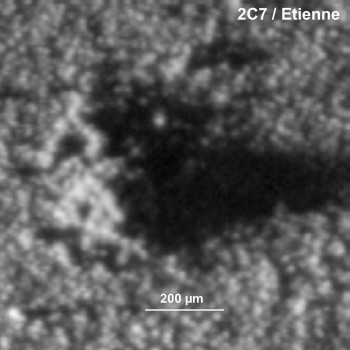 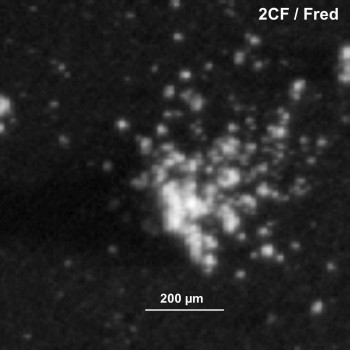 Fred shares characteristics of both glued and rubble pile structures, transitioning from a more consolidated glued cluster in the lower left to a more disperse rubble pile in the top right. It could result from the fragmentation of a large parent particle close to the target, perhaps entering the target at an angle.

Relationships between dust grain families
The COSIMA team also explored any possible correlations between the dates and duration the plates were exposed for and the types of particles collected. For example, the plates are typically exposed for several months, for hours to days at a time, thus the collection period usually covers a wide range of orientations – and sometimes distance – of the spacecraft with respect to the comet and Sun.

As anticipated, the collection rate was highly variable, with a broad and expected trend towards higher collection rates closer to the nucleus. But it is not just comet activity that plays a role in the collection rate; the parent particle grains, over 1 mm in size, are also broken up close to or within the COSIMA collection funnel and target plates, influencing the final morphology of the clusters.

A number of major collection events were also identified, defined as a large number of particles collected in a short period of time. For example, during one day-long collection period on 24 January 2015, 76% of the total volume of grains identified arrived in that one day.

Major collection events include all types of grain types, albeit with different distributions for each event. It is therefore assumed that the clusters share a similar path from the comet surface to Rosetta as compact particles, with a large contribution from mm-sized ‘fluffy’ particles lifted from dust mantle. Some of the more compact particles are thought to originate directly from active regions (as supported by GIADA measurements), while farther from the nucleus they are part of large clusters that fragment close to COSIMA.

“Typology of dust particles collected by the COSIMA mass spectrometer in the inner coma of 67P/Churyumov-Gerasimenko” by Y. Langevin et al is published in the journal Icarus.

(Reminder: the credit line for all images is: ESA/Rosetta/MPS for COSIMA Team MPS/CSNSM/UNIBW/TUORLA/IWF/IAS/ESA/BUW/MPE/LPC2E/LCM/FMI/UTU/LISA/UOFC/vH&S/ Langevin et al (2016))