Imhotep, on Comet 67P/Churyumov-Gerasimenko’s large lobe, is one of the most geologically diverse regions observed by Rosetta. This blog post presents the results of a new paper by Anne-Thérèse Auger from the Laboratoire d’Astrophysique de Marseille (LAM, France) et al, which describes Imhotep’s key features and discusses possible scenarios for this region’s evolution. The post was prepared with inputs from Anne-Thérèse and co-author Olivier Groussin, also from LAM. 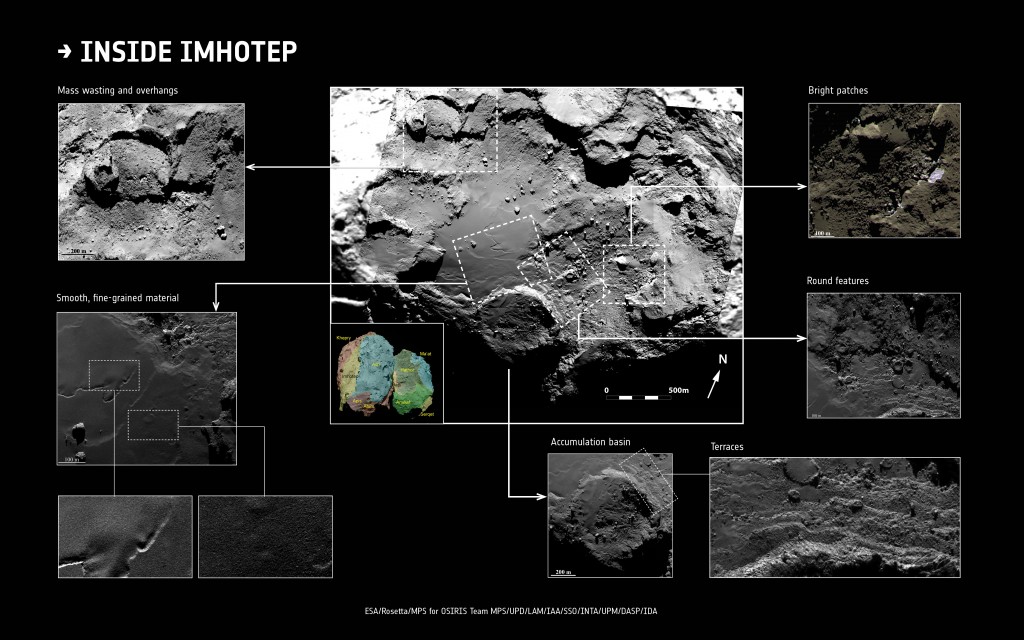 Imhotep is located close to the comet’s equator and is relatively flat compared to the overall shape of the nucleus. It caught the attention of scientists on the approach to the comet with its broad smooth area, covering about 0.8 square km, standing out in the first close images of this region. Within this intriguing area, a variety of diverse features can be found. This diverse geomorphology holds fundamental clues to understanding the cometary processes that lead to the formation of the surface as we see it today, and also provides insights for the underlying and possibly primordial structure of the comet. 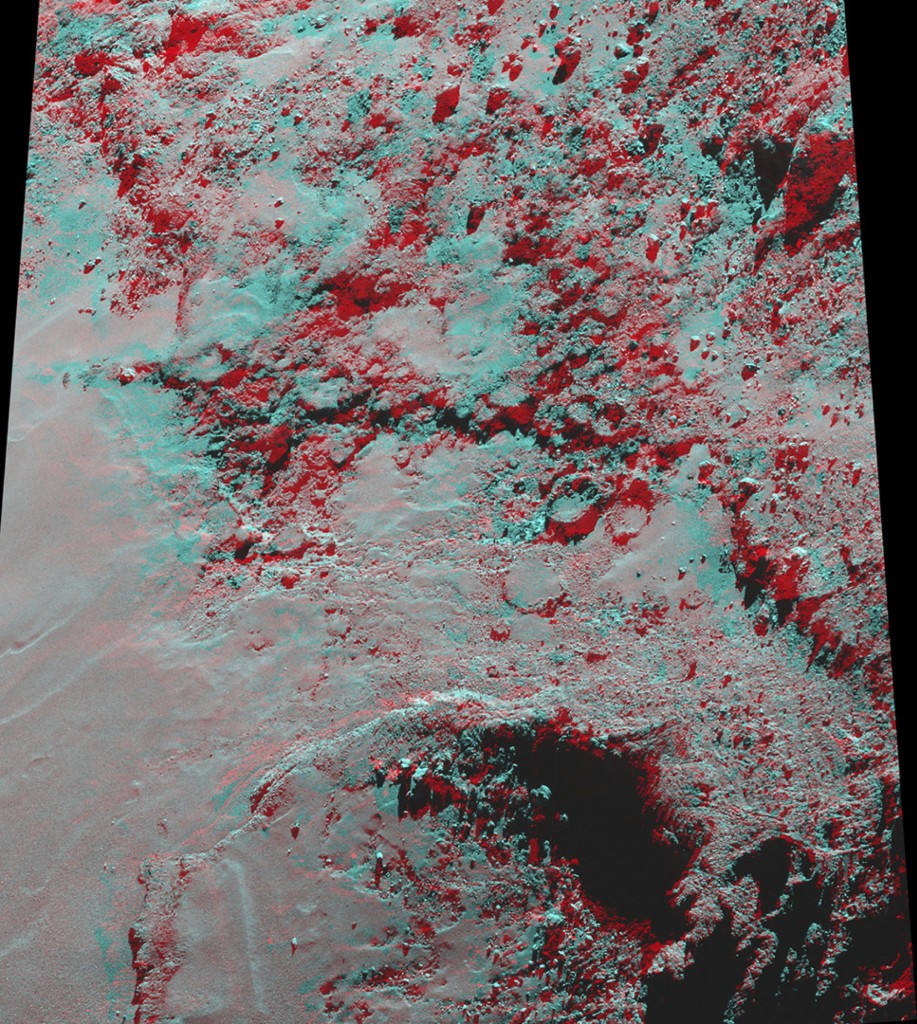 Anaglyph image of part of the Imhotep region on the large lobe of Comet 67P/Churyumov–Gerasimenko. To best enjoy this view, use red–green/blue 3D glasses. The image was created from two OSIRIS narrow-angle camera images acquired on 22 November 2014 from a distance of 31 km from the comet centre. The image scale is 56 cm/pixel.
Credits:
ESA/Rosetta/MPS for OSIRIS Team MPS/UPD/LAM/IAA/SSO/INTA/UPM/DASP/IDA; acknowledgment: D. Romeuf (University Claude Bernard Lyon 1, France)

The graphic below maps the geomorphology of the region, indicating the different types of features identified in Imhotep. The context image at the start of this post showcases some examples of each of these features. Short descriptions follow.

Smooth terrains
Smooth terrains cover about one-third of Imhotep and are located in the gravitational lows. High-resolution (30 cm/pixel) images show that it comprises fine-grained material with a size of up to a few tens of centimetres for the largest grains. As seen elsewhere on the comet, the thickness of the dust seems to vary, with the underlying surface revealed in places. Within the smooth terrains a number of curvilinear features are seen, spanning hundreds of metres to a km in length. In some places they cross the interface between smooth and more consolidated terrain, suggesting a continuation of the consolidated terrain below. 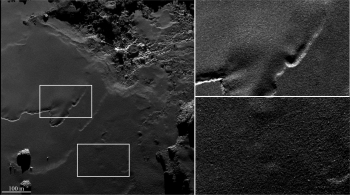 Close ups of smooth, fine-grained material in the Imhotep region on Comet 67P/Churyumov–Gerasimenko. The insets on the right-hand side correspond to the boxes outlined in the left-hand image. A close-up of part of a long, curvilinear feature is also shown. The image was taken with Rosetta’s OSIRIS narrow-angle camera on 5 October 2014. The image scale is 34 cm/pixel. Credits: ESA/Rosetta/MPS for OSIRIS Team MPS/UPD/LAM/IAA/SSO/INTA/UPM/DASP/IDA

The smooth terrains are considered relatively undisturbed areas that evolve slowly and where material has time to settle and accumulate. Anne-Thérèse and colleagues propose that the fine material originates from the cliffs on the border of the basins where mass wasting occurs. It is then transported by gravity downslope to a flat surface. The wideness of the smooth area can be explained by the progressive retreat of the cliffs over a long time, probably some tens to hundreds of perihelion passages, meaning that the more distant the fine material is from the cliff, the older the deposit is. “Airfall” deposits as a result of activity elsewhere on the comet may also contribute to a small fraction of the dust observed here.

‘Rocky’ terrains
The term ‘rocky’ is used as way to distinguish this terrain from the smooth terrains; in reality, the comet’s density is very low, some 470 kg/m^3 , and it is extremely porous. These ‘rocky’ terrains consist of consolidated material that is exposed at the periphery of Imhotep. They are the sites of erosion, as emphasized by the large numbers of boulders and debris seen close to these outcrops. The erosion observed along the exposed walls is likely triggered by the sublimation of ices, controlled by gravity and exacerbated by fractures. 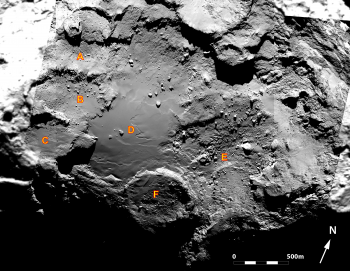 Accumulation basins
Accumulation basins dominate Imhotep, and are defined as areas where fine material and boulders seem to accumulate preferentially. Six basins have been suggested within Imhotep, covering about two-thirds of this region (other possible accumulation basins lie just outside the defined boundary).  The near-circular appearance of the majority of the basins is interpreted as the surface expression of large primordial voids in the nucleus that existed since the comet’s formation. Over time, the overlying surface was weakened by erosion and fracturing, and it eventually collapsed, with erosion over time widening the basin and filling it in with debris. Basin F is observed to be slightly different in that it is extensively fractured, with the fractures pointing towards its interior. Since this pattern is not a feature associated with collapse, it must have formed or been modified in some other way, perhaps by impact or associated with activity, perhaps even by a gas bubble rising from the interior (as already proposed by other scientists for Comet 9P/Tempel 1).

A range of features can be seen in this image, including curvilinear features in the smooth material (left) and terraces close to a basin-like feature (centre). To the top, a number of quasi-circular features can be seen. The image was acquired with Rosetta’s OSIRIS narrow-angle camera on 5 September 2014 from a distance of 43.5 km from the comet centre. The image scale is 80 cm/pixel.
Credits: ESA/Rosetta/MPS for OSIRIS Team MPS/UPD/LAM/IAA/SSO/INTA/UPM/DASP/IDA

Terraces
Terraces are seen in various locations on the comet and strongly suggest internal layering (a topic that will be discussed in more detail in a future paper). The layers in Imhotep have a relatively constant thickness of a few metres, implying a repetitive process, perhaps by compaction of successive deposits of material. The terraces highlighted at basin F are extensively fractured, meaning that the layers formed first, before the basin, and before the fracturing. As such they may be pointing to processes relating to the formation of the comet itself, or to an ancient evolutionary process.

Colour-composite image focusing on bright and bluer patches in the Imhotep region on Comet 67P/Churyumov–Gerasimenko. The image at right shows a zoom into the region indicated in the left-hand image. The composite comprises images taken with the blue (480 nm), green (536 nm) and orange (649 nm) filters of Rosetta’s OSIRIS narrow-angle camera on 5 September 2014, from a distance of 43 km from the comet centre. The image scale is 81 cm/pixel.
Credits: ESA/Rosetta/MPS for OSIRIS Team MPS/UPD/LAM/IAA/SSO/INTA/UPM/DASP/IDA

Bright patches
A few bright patches are seen on exposed walls. They appear bluer than the average colour of the comet in colour-composite images and suggest the presence of ice. If they are confirmed as water-ice, these could be some of the youngest areas on the comet.

Round features
Groups of quasi-circular features like these have only been seen so far in the Imhotep region on Comet 67P/C-G – around 70 have been identified measuring between 2 m and 59 m across. They have a rim and at their top either a depression or a mesa of fine material that sometime seems to bulge above the rim. Many of these features appear to be stacked on top of one another. Their formation mechanism is not clear but one scenario is that they represent ancient degassing conduits that were once exposed, subsequently covered over by dust, and are now being revealed by differential erosion of the overlying layers. Interestingly, roundish features with a similar morphology were also observed on Comet 9P/Tempel 1. 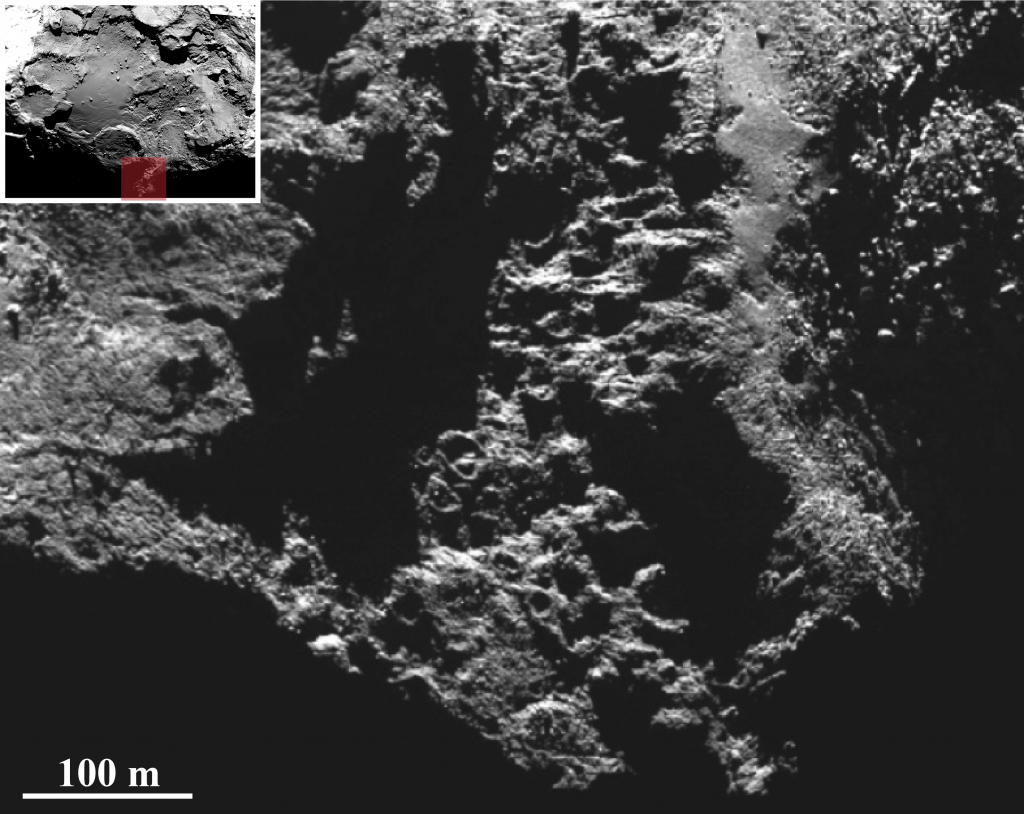 Recently illuminated regions in the south of the Imhotep region on the large lobe of Comet 67P/Churyumov-Gerasimenko reveal round features similar to those seen in the centre of the same region.
The image was taken with Rosetta’s OSIRIS narrow-angle camera on 31 October 2014 from a distance of 33 km from the comet centre. The image scale is 63 cm/pixel.
Credits:ESA/Rosetta/MPS for OSIRIS Team MPS/UPD/LAM/IAA/SSO/INTA/UPM/DASP/IDA

Boulders
Some 2207 boulders have been counted in Imhotep, with sizes from 2 m (the lowest limit of the observations) to 90 m. They are mostly located at the bottom of slopes and are associated with mass-wasting of more consolidated terrains. A number of large boulders (including the famous Cheops boulder) lie isolated towards the centre of the smooth region. With a size of tens of metres, it is unlikely that they are airfall deposits. Anne-Thérèse’s team suggest that the boulders are the remnants of a previous mass wasting event at the foot of an earlier cliff, when the basins were less wide. The boulders have appeared to slightly sink over time, as material accumulated around them.

Evolution of Imhotep
Based on this overview of the geomorphology of Imhotep and of the processes thought to be responsible for its landscape, Anne-Thérèse’s team propose a scenario for the formation and evolution of this region.

They suggest that first the basins are formed through collapse of large pre-existing cavities in the comet nucleus. Over time these basins are eroded through sublimation of ices exposed in their walls and interiors, enlarging their rims and infilling their interiors with boulders and fine-grained material. The degradation of boulders and further erosion from mass-wasting, combined with airfall deposits, leads to the accumulation of smooth material in gravitational lows. At the same time, differential erosion of the surface may reveal underlying features such as the possible ancient conduits.

“There are still a lot of mysteries, but now that we are approaching perihelion we will be looking out for any changes on the surface, which will help us understand how this region evolves today,” concludes Anne-Thérèse.

“Geomorphology of the Imhotep region on comet 67P/Churyumov-Gerasimenko from OSIRIS observations” by A-T Auger et al is published online in Astronomy & Astrophysics.

Images are also available via the Rosetta gallery on ESA’s main web portal.