In January the first maps of Comet 67P/Churyumov-Gerasimenko were published, identifying 19 geomorphologically distinct regions on its surface. Six months on and much more work has been done on refining the boundaries between these regions. This blog post showcases some of the OSIRIS images acquired from close orbit and presented in a new paper that have enabled an in-depth study of the different regions and their boundaries. This post was prepared with inputs from lead author M. Ramy El-Maarry from the University of Bern, who introduces this post with an inside story on how some of the regional names were chosen: 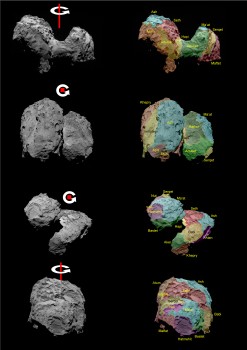 OSIRIS images showing Comet 67P/Churyumov–Gerasimenko in different orientations. Rotation axes have been added; in the middle two panels the rotation axis is almost toward the viewer, that is, providing a north polar view.
Right: the same images with regional boundaries and nomenclature added.
Credits: ESA/Rosetta/MPS for OSIRIS Team MPS/UPD/LAM/IAA/SSO/INTA/UPM/DASP/IDA

“Early on in the mapping phase, we decided on naming the regions of the comet using names of ancient Egyptian deities. We wanted to adhere to the ancient Egyptian theme of the mission and have a large inventory of names if needed. Luckily, ancient Egyptians had so many deities in their long history that made this an easy decision. Moreover, many of the names were catchy, easy to remember, and more importantly, easy to pronounce. I remember we initially tried using names of ancient cities and we were coming across a lot of names that were very difficult to wrap your tongue around, even for an Egyptian like me! So we decided to use the following naming convention: gods for the ‘body’ lobe and goddesses for the ‘head’. We picked Hapi for the neck since Hapi is the Nile god, and we figured that he should separate the lobes in the same way that the Nile splits Egypt into an eastern and western side. Of course, there were obvious names to discard (such as Osiris!) so we decided to skip on all ‘world-famous’ gods such as R’a and Amun, partly because they have been used before in other missions, but also to introduce people to lesser-known names.

In another story, we decided on using Imhotep for one of the most notable regions on the comet. Imhotep was one of the most brilliant figures of the ancient world as a scientist, engineer, and a physician. Luckily for us, there were no Nobel prizes in ancient Egypt, so when Imhotep died, he was deified by ancient Egyptians to credit his accomplishments, which meant we could actually use his name as a nice tribute from our side!”

Around Aten, Aker, Babi and Khepry 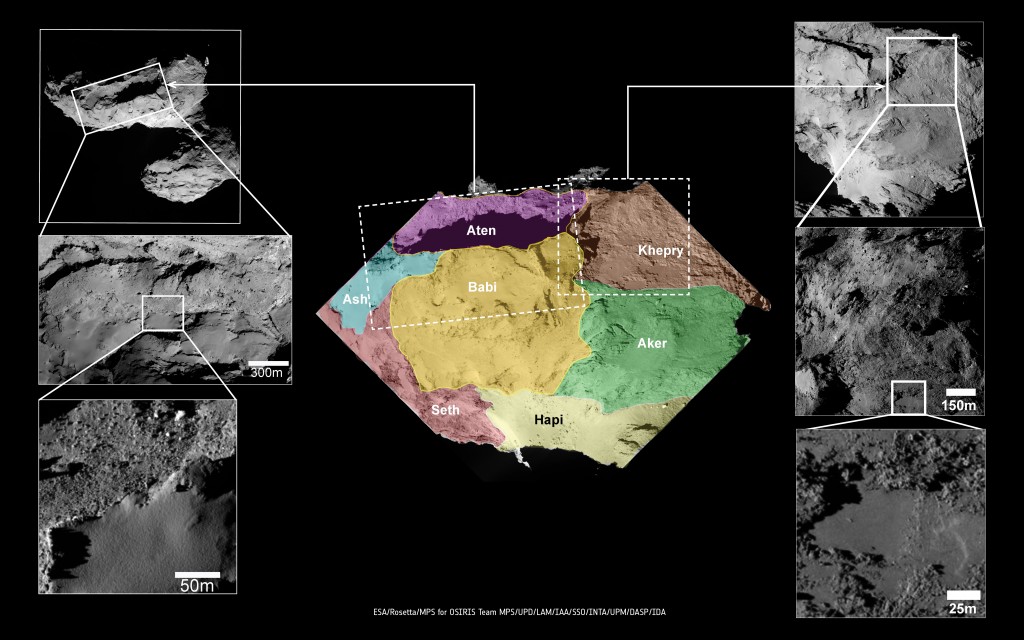 This set of images focuses on a number of boundaries on the comet’s large lobe, in particular on the smaller regions Aten, Aker, Babi and Khepry, their relationship to each other and to the larger and perhaps more familiar Seth and Ash regions nearby. The transition into the smooth Hapi neck region is also indicated in the context image. The insets show interesting contrasts in surface textures at the boundaries of Aten and Babi (left) and Khepry, Babi and Aker (right).

Aten is dominated by a large elongate depression surrounded by the brittle and dusty material of Ash and Babi. El-Maarry et al suggest that its sharp sides and irregular shape could point to a rapid and perhaps violent burst of activity. The close-ups show rubble and boulders inside the depression, the largest of which reach up to 30m in diameter. The rubble suggests rock fall events, most likely from the rim of the depression.

The smooth deposits on the surrounds make a striking contrast and mark the boundary with Babi. In the middle inset (left) this dusty covering can be seen overlying regions of significant layering, which could be parts of Seth extending below the dusty deposits of Ash and into Babi. Indeed, Babi hosts one quasi-circular structure reminiscent of Seth that rises 60-80m over Khepry, marking the boundary in this area (see insets at top and middle right). Well-defined ridges also separate the lower-lying Babi from Aker and Seth.

Khepry and Aker both have a rough, consolidated appearance, exhibit linear markings but very few boulders. Aker has a slightly smoother surface texture than Khepry but they both contain very smooth patches 50–100m across that are located in topographical lows. The inset at bottom right shows a close-up view of one of these smooth deposits close to the Khepry-Aker border.

From Anubis and Atum to Hapi and Anuket 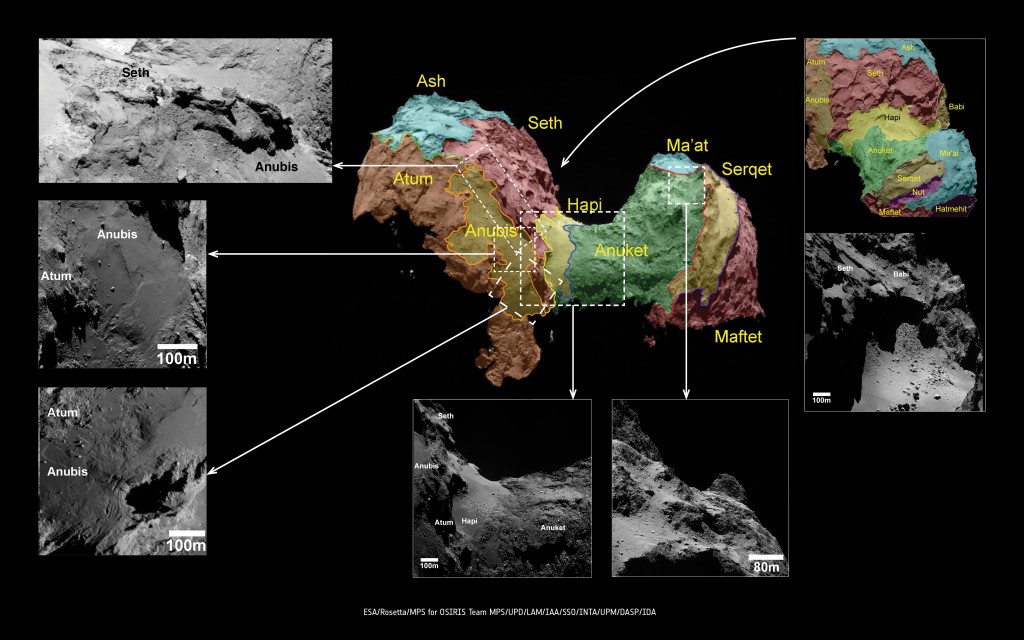 This image set highlights the boundaries between Anubis, Atum and Seth on the large lobe, and the transition between the neck and Anuket on the small lobe.

Atum is a rather complex, rough-textured region with linear features that are similar to some of the structures observed in Imhotep and interpreted as terraces resulting from erosion of an underlying layered terrain. Atum borders the smooth-textured Anubis region and almost encloses it, with a well-defined ridge separating it from Seth.

A notable feature between the boundary of Anubis with Atum is a set of parallel curved lineaments. This feature could indicate possible folding of the surface, or the surface expression of buried terraces.

Nearby, Atum shares a boundary with the Anuket region on the head lobe, the latter of which appears to traverse the neck region in an area devoid of the smooth deposits that define the transitional Hapi region.

Anuket has a rough surface with numerous boulders but appears to smooth out away from the neck and toward the boundary with dust-covered Ma’at. The smoother regions seen in Anuket are patches of dust, suggesting that material similar to that of Anuket’s surface may extend underneath the dust-covered Ma’at region.

On the head: Ma’at, Maftet, Nut and Serqet 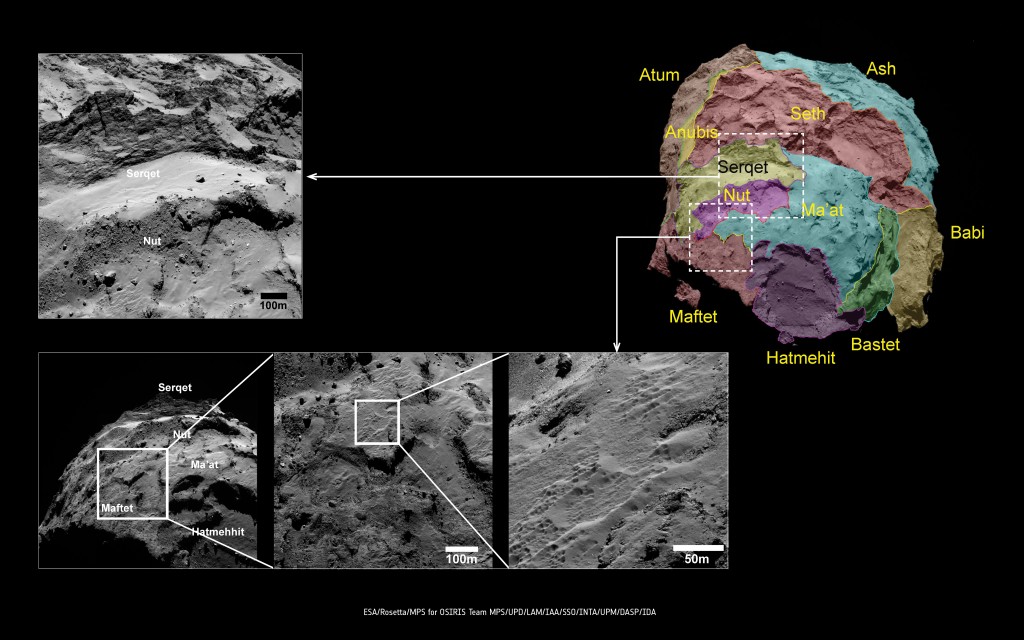 The Nut depression and Serqet are two of the smallest regions on the surface of the comet in terms of surface area, but yet show significant morphological diversity. The Serqet region is defined by a ridge of consolidated material with an adjacent flat and smooth, dusty plain, which forms the rim of Nut. Nut is classified as a depression and is extensively infilled with boulders, perhaps from the erosion of Serqet and an influx of dust similar to that seen in Ma’at.

Ma’at’s dust-covered texture resembles Ash on the comet’s body. It also exhibits sharp outcrops of materials emerging from the dust, which show similarities to the more consolidated material in Anuket. Ma’at grades into Maftet where the dust gradually thins out into rough, terraced and fractured terrain pockmarked with irregularly shaped shallow depressions. Patches of the fading dusty material along this boundary show a pitted texture, which El-Maarry et al suggest is an ice-rich material that may be undergoing desiccation through sublimation. The dust covered regions both on the head and on the body of the comet are likely linked to ‘airfall’ deposition from more active regions.

Explore the comet in 3D
Further details of the comet’s boundaries are provided in stunning anaglyph images that are possible when two images of similar spatial resolution and illumination are taken of the same region and can be appropriately co-registered. The following anaglyphs were used to identify and assess topographical boundaries between adjacent regions and changes in relief in the latest study. To best enjoy the 3D effect, please use red-blue/green “3D” glasses. 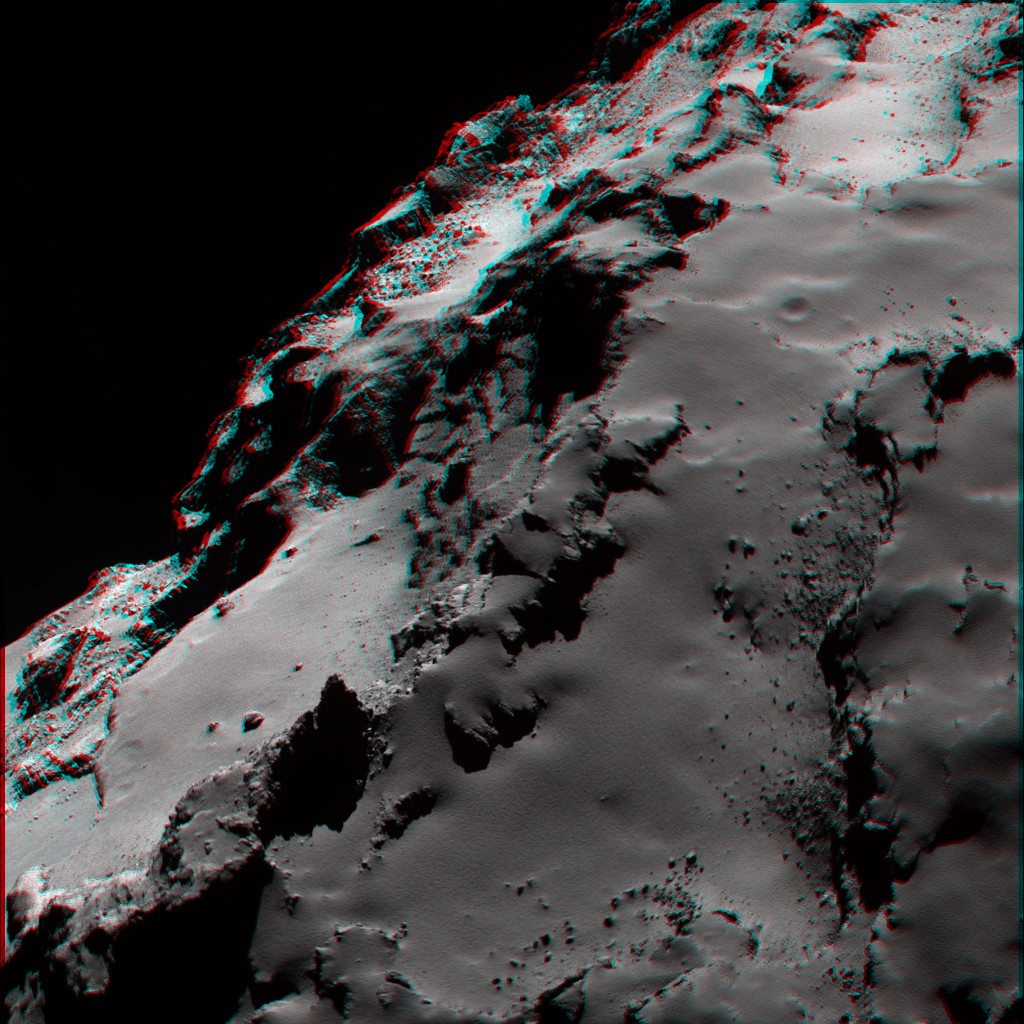 OSIRIS narrow-angle camera image showing the smooth nature of the dust covering the Ash region and highlighting the contrast with the more brittle material exposed underneath in Seth.
Credits: ESA/Rosetta/MPS for OSIRIS Team MPS/UPD/LAM/IAA/SSO/INTA/UPM/DASP/IDA 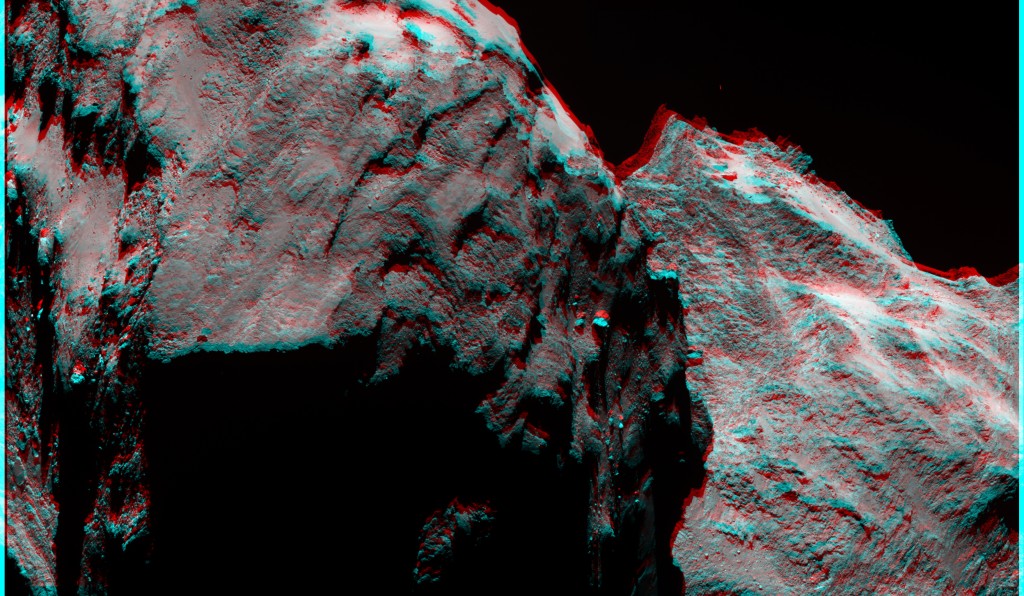 OSIRIS narrow-angle camera mosaic of two images showing an oblique view of the Atum region and its contact with Apis, the flat region in the foreground. This region is rough and pitted, with very few boulders.
Credits: ESA/Rosetta/MPS for OSIRIS Team MPS/UPD/LAM/IAA/SSO/INTA/UPM/DASP/IDA 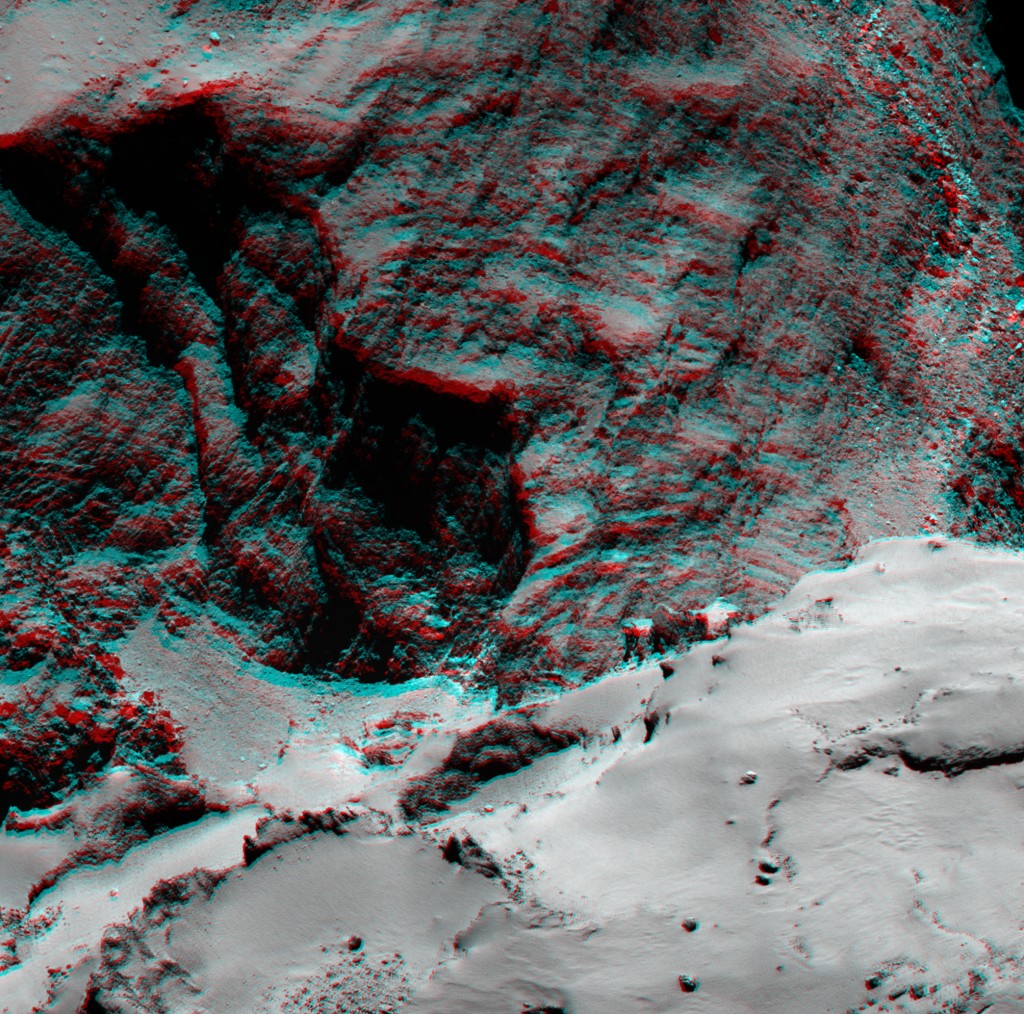 OSIRIS narrow-angle camera image highlighting an alcove structure at the Hathor-Anuket boundary on the comet’s small lobe. The layering seen in the alcove could be indicative of the internal structure of the comet.
Credits: ESA/Rosetta/MPS for OSIRIS Team MPS/UPD/LAM/IAA/SSO/INTA/UPM/DASP/IDA

Non-anaglyph versions of these images, along with individual images of the insets seen in the context images in this post, are available via the ESA web portal gallery.