Activity on Comet 67P/Churyumov-Gerasimenko continues to rise, with new images from OSIRIS showing that some regions remain active even after nightfall. This report is provided by the OSIRIS team at the Max Planck Institute for Solar System Research (MPS) in Germany.

Rosetta’s scientific camera OSIRIS captured the sunset jets in the Ma’at region of the comet’s small lobe in late April. Images were taken approximately half an hour after the Sun had set over the region and show clearly defined jets of dust escaping into space. 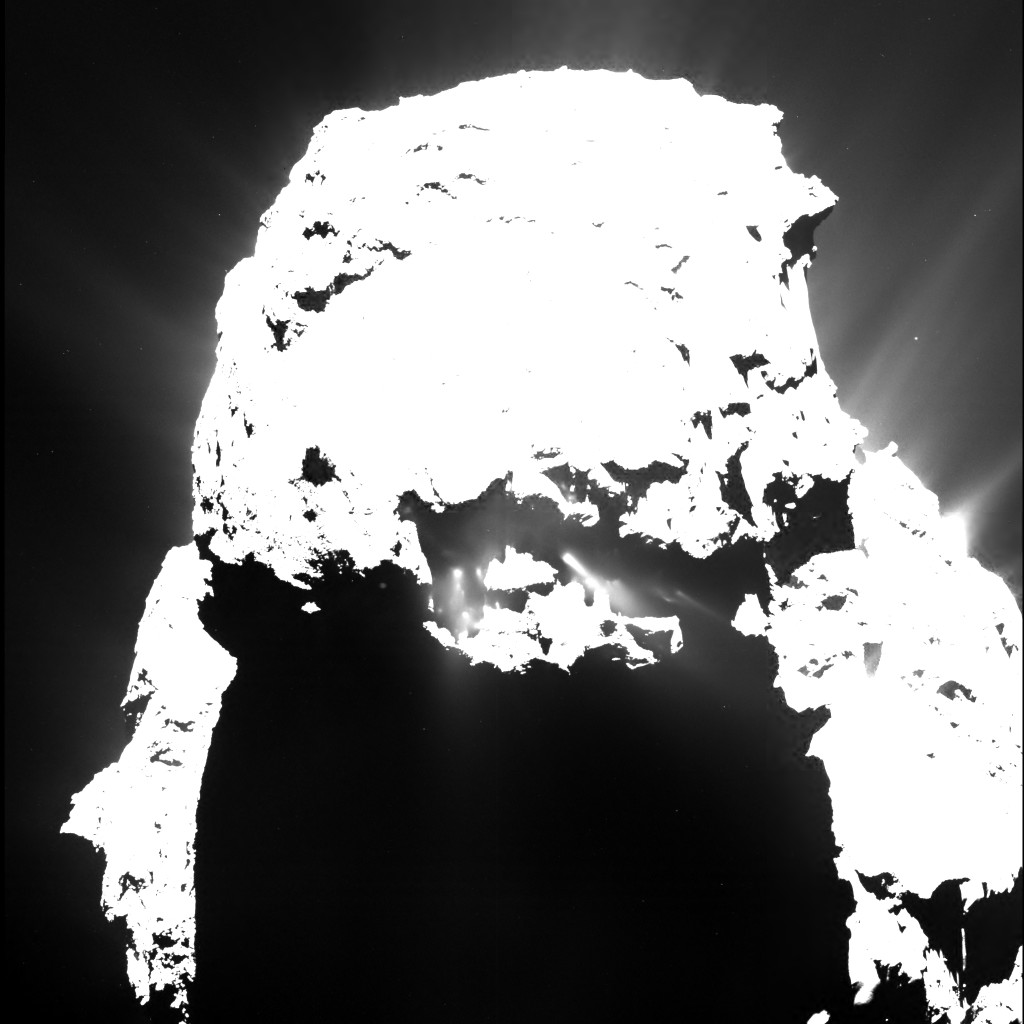 Comet 67P/C-G on 25 April 2015, from a distance of approximately 93 kilometres, seen through the narrow-angle OSIRIS camera. The image shows jets emanating from the comet’s small lobe after nightfall. The  exposure time was 0.096s. The image is presented to show the details of the jets, rather than the nucleus. Credits: ESA/Rosetta/MPS for OSIRIS Team MPS/UPD/LAM/IAA/SSO/INTA/UPM/DASP/IDA

“Only recently have we begun to observe dust jets persisting even after sunset,” says OSIRIS Principal Investigator Holger Sierks from the Max Planck Institute for Solar System Research (MPS) in Germany.

Until recently, the comet’s activity originated from illuminated areas on the day side. As soon as the Sun set, these jets subsided and did not re-awaken until after sunrise the following day. One recent exception was the event captured on 12 March, which caught the onset of a dust jet at the brink of dawn, in the Imhotep region on the comet’s large lobe. 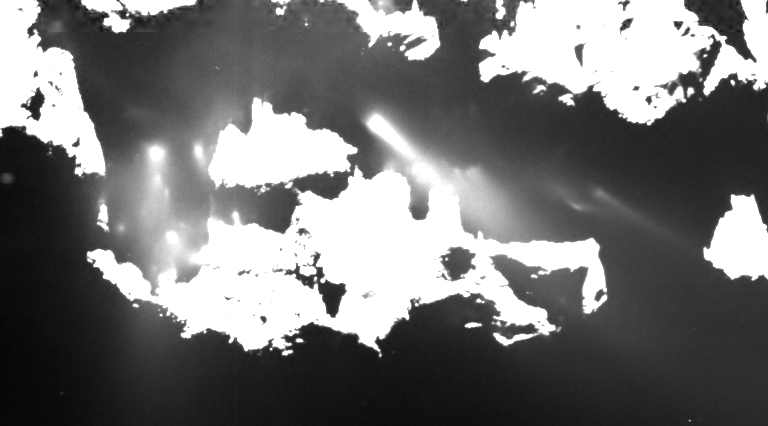 Close-up of the dust jets seen on 25 April 2015 on the comet’s small lobe. Credits: ESA/Rosetta/MPS for OSIRIS Team MPS/UPD/LAM/IAA/SSO/INTA/UPM/DASP/IDA

According to the OSIRIS scientists, the sunset jets are another sign of the comet’s increasing activity.

“Currently, 67P is rapidly approaching perihelion in mid-August,” says Sierks. “The solar irradiation is getting more and more intense, the illuminated surface warmer and warmer.”

The OSIRIS team think that the comet can store the incoming heat for some time beneath its surface, resulting in sustained activity from these regions even after nightfall.

“While the dust covering the comet’s surface cools rapidly after sunset, deeper layers remain warm for a longer period of time,” says OSIRIS scientist Xian Shi from the MPS, who is studying the sunset jets.

The scientists suspect that the comet’s supply of frozen gases that fuel the comet’s activity exists in these deeper layers.

Previous comet missions, such as Stardust’s flyby of Comet 81P/Wild 2 and Deep Impact’s mission to Comet 9P/Tempel 1, also found evidence of jets sustained on the night side.

“But only the high-resolution images of OSIRIS now allow us to study this phenomenon in detail,” adds Sierks.