OSIRIS catches activity in the act

Rosetta’s scientific imaging system OSIRIS has witnessed a new jet of dust emerging from the surface of Comet 67P/Churyumov-Gerasimenko. The image was presented during the European Geosciences Union General Assembly, EGU, in Vienna last week.

Sometimes it is all a matter of being in the right place at the right time. Or, as in the case of ESA’s space probe Rosetta, of opening your eyes at the exactly right moment. In mid-March, the OSIRIS camera was able to catch the elusive moment when a new dust jet from comet 67P/C-G burst into life.

The comet’s activity has been significantly increasing over the last weeks and months. As the comet moves closer to the Sun along its orbit, its nucleus gets warmer and warmer. Frozen gases sublimate from its surface, carrying dust particles with it and enshrouding the nucleus in a dense coma. With only four months to go until perihelion – the closest point to the Sun – this process is well underway, with pronounced dust jets seen at all times on the comet’s day side. 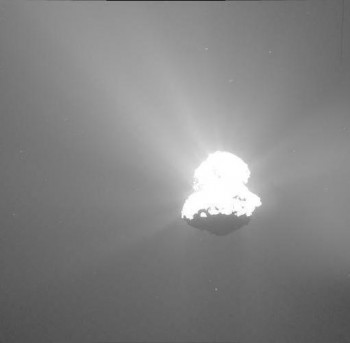 The scene at 07:13 CET on 12 March. Credits: ESA/Rosetta/MPS for OSIRIS Team MPS/UPD/LAM/IAA/SSO/INTA/UPM/DASP/IDA

The two images released today show the remarkable onset of such a jet for the first time. They were taken on 12 March from a distance of 75 kilometres. In the first image, obtained at 07:13 CET, several rays of dust jets frame the upper, illuminated side of the comet. The dark underside shows no such features. Two minutes later, the picture has changed: a spectacular new jet has emerged on the dark side, hurtling dust into space and displaying a clearly discernable fine structure.

“This was a chance discovery,” says OSIRIS principal investigator Holger Sierks from the Max Planck Institute for Solar System Research (MPS) in Germany. “No one has ever witnessed the wake-up of a dust jet before. It is impossible to plan such an image.”

Tracking variations in brightness along the jet, the researchers estimated the velocity of the dust grains to be at least eight metres per second. This is compatible with measurements made with Rosetta’s GIADA instrument on other occasions, for dust particles emitted from the comet’s surface.

Surprisingly, the new-born jet arises from a shadowed area on the underside of the comet, close to the centre of the Imhotep region. So far cometary activity has only been observed on the comet’s day-side.

The scene at 07:15 CET on 12 March. Credits: ESA/Rosetta/MPS for OSIRIS Team MPS/UPD/LAM/IAA/SSO/INTA/UPM/DASP/IDA

“In these images we see Imhotep on the brink of dawn,” OSIRIS scientist Jean-Baptiste Vincent from the MPS explains. “It is possible that the first rays of sunlight hit some cliffs or outcrops that remained hidden to Rosetta due to the orbital position at the time.”

The onset of activity could also be the result of a different type of more explosive activity. That is, the outburst could have been triggered by a wave of heat reaching ices trapped in a deeper layer beneath the surface.

OSIRIS could not continue to observe the new feature after 07:17 CET because Imhotep was soon fully illuminated, making it impossible to discern individual jets in the overexposed coma. It is therefore not clear whether Rosetta witnessed the birth of a continuous jet or a short-lived outburst.

“Usually, 67P’s dust-jets are rather long-lived,” says Vincent, who has been monitoring the comet’s activity over the past months. “Most of them last for a full dayside rotation of approximately six hours and even reappear in the next rotation.”

However, scientists believe that eruptive outbursts can also occur. This style of outburst might have triggered the observed increase in brightness in the comet’s coma on 30 April 2014. At that time the coma expanded over 1800 kilometres – but faded again a few weeks later.

Last month’s unique observation, along with the continued monitoring of 67P/C-G’s global activity patterns, will give the scientists the chance to test different models of activity.

About OSIRIS: The scientific imaging system OSIRIS was built by a consortium led by the Max Planck Institute for Solar System Research (Germany) in collaboration with CISAS, University of Padova (Italy), the Laboratoire d’Astrophysique de Marseille (France), the Instituto de Astrofísica de Andalucia, CSIC (Spain), the Scientific Support Office of the European Space Agency (The Netherlands), the Instituto Nacional de Técnica Aeroespacial (Spain), the Universidad Politéchnica de Madrid (Spain), the Department of Physics and Astronomy of Uppsala University (Sweden), and the Institute of Computer and Network Engineering of the TU Braunschweig (Germany). OSIRIS was financially supported by the national funding agencies of Germany (DLR), France (CNES), Italy (ASI), Spain (MEC), and Sweden (SNSB) and the ESA Technical Directorate.