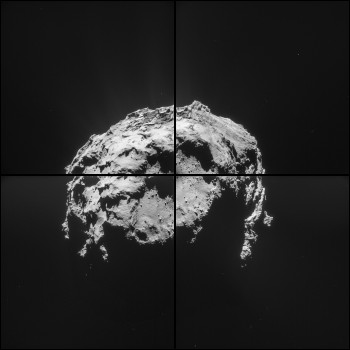 Four image montage of Comet 67P/Churyumov-Gerasimenko comprising images taken on 14 February 2015 at 04:32 GMT from a distance of 35.0 km. The image scale is 3.0 m/pixel and each frame measures 3.0 km across. The view focuses Hatmehit, the large depression on the comet’s small lobe.
Credits: ESA/Rosetta/NAVCAM – CC BY-SA IGO 3.0

On Saturday, Rosetta passed within just 6 km of the surface of Comet 67P/Churyumov-Gerasimenko in the first dedicated close flyby of the mission. The closest approach took place at 12:41 UT over the Imhotep region on the comet’s large lobe.

Four sets of NAVCAM images taken on 14 February were downlinked from the spacecraft yesterday and we are delighted to be able to share all four with you here today.

As usual, we present either a mosaic of montage of each image, noting that at the closest distances the combined effect of the rotation of the comet and the movement of the spacecraft between the first and last image being taken is particularly large, resulting in difficulties in creating an accurate mosaic. The montages have been tweaked in Lightroom for global intensity/contrast, but we have not made any local adjustment of e.g. ghosts/vignetting or other local intensity mismatches; the mosaic has been adjusted to fix boundary intensity mismatches. The individual frames are also provided here [as a zip file] to check features and to offer you the chance to create your own mosaics. 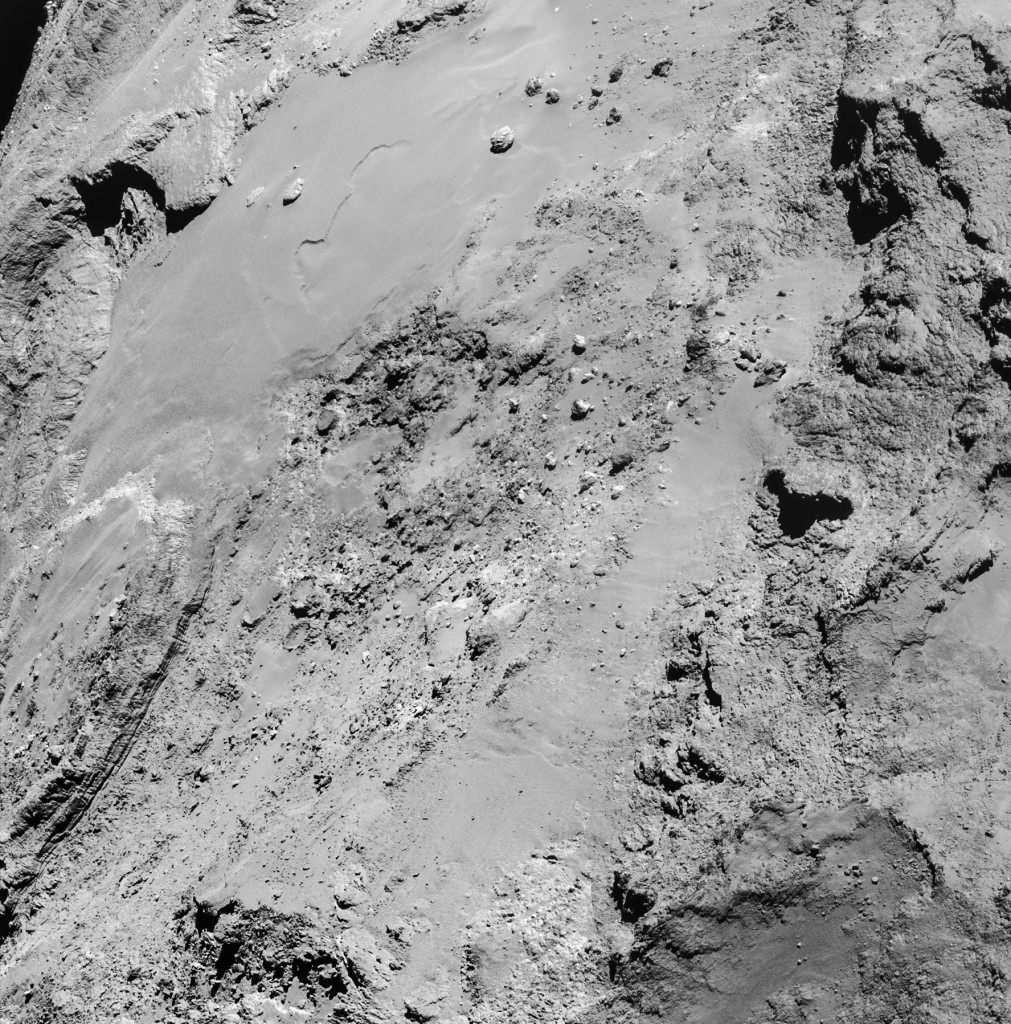 Four image mosaic of Comet 67P/Churyumov-Gerasimenko comprising images taken on 14 February at 14:15 GMT from a distance of 8.9 km from the surface. The image scale is 0.76 m/pixel and the mosaic measures 1.35×1.37 km across. The image focuses on the stunning features of the Imhotep region, on the comet’s large lobe.
Credits: ESA/Rosetta/NAVCAM – CC BY-SA IGO 3.0 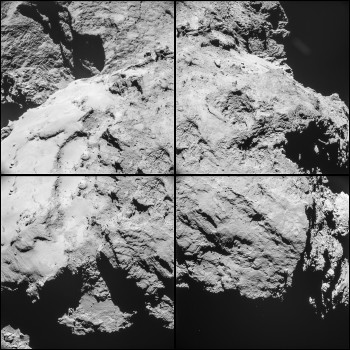 Four image montage of Comet 67P/Churyumov-Gerasimenko comprising images taken on 14 February 2015 at 10:15 GMT from a distance of 12.6 km from the comet centre (about 10.6 km from the surface). For the comet centre distance, the image scale is 1.1 m/pixel and each frame measures 1.1 km across. In this orientation the view is across the ‘back’ of the large comet lobe, with the ‘neck’ and the small comet lobe towards the top of the image.
Credits: ESA/Rosetta/NAVCAM – CC BY-SA IGO 3.0

The closest images, taken shortly before (right) and after (above) the point of closest approach respectively, provide stunning details of the contrasting terrains that we have seen so far on the comet. Particularly notable in the image set taken at 14:15 UT (above) is the long, layered and fractured exposed surface at the lower left.

Towards the centre of the frame the faint outline of raised near-circular objects with smooth floors can be seen. In the same image, several angular blocks appear to jut out from beneath the surface. Boulders, ranging in size from a few metres to a few tens of metres, lie scattered across the whole surface of the comet. Here, in Imhotep, we see boulder Cheops towards the top centre of the mosaic. 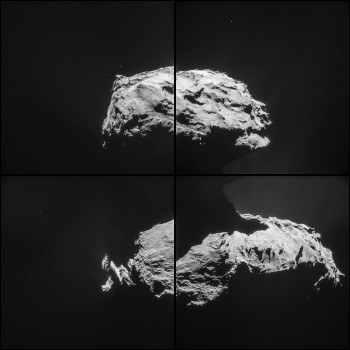 Four image montage of Comet 67P/Churyumov-Gerasimenko comprising images taken on 14 February 2015 at 19:42 GMT from a distance of 31.6 km form the comet centre. The image scale is 2.7 m/pixel and each frame measures 2.8 km across. Rosetta’s parting shot following the close flyby features the comet’s small lobe at the top of the image, with the larger lobe in the lower portion of the image set.
Credits: ESA/Rosetta/NAVCAM – CC BY-SA IGO 3.0

During the flyby, the spacecraft passed through “zero phase” angle – i.e. with the Sun exactly behind the spacecraft – offering extremely good illumination conditions. As well as providing the opportunity to take close-up high-resolution images of the comet surface, flybys like this also allow Rosetta’s instruments to sample the innermost parts of the comet’s atmosphere, or coma, to better understand the connection between the source of the observed activity and the wider coma.

Rosetta is now moving out for a far view of the comet – it will reach a distance of about 255 km from the comet centre tomorrow.

Download the 16 individual frames comprising the four montages/mosaic here, as a zip file.