This four-image mosaic comprises images taken from a distance of 27.9 km from the centre of Comet 67P/Churyumov-Gerasimenko on 12 January. The image resolution is 2.4 m/pixel and the individual 1024 x 1024 frames measure 2.4 km across. The mosaic is slightly cropped and measures 4.4 x 3.9 km.

Four image mosaic comprising images taken on 12 January 2015 by Rosetta’s Navigation Camera (NAVCAM). Rotation and translation of the comet during the imaging sequence make it difficult to create an accurate mosaic, and there may be some spurious spatial and intensity features as a result of the mosaic-making sequence, so always refer to the individual frames before performing any detailed comparison or drawing conclusions about any strange structures or low intensity extended emission. Credits: ESA/Rosetta/NAVCAM – CC BY-SA IGO 3.0

This view is complementary to the 8 January CometWatch, with the comet’s smaller lobe in the foreground, but this time on the left. The new view provides a side-on look onto the large and roughly circular depression close to the Agilkia site, but this time from the opposite side, revealing parts of the cavity that were hidden from sight in the 8 January image.

The larger of the two comet’s lobe fills the right half of the image. While the light effect is less dramatic than in the 8 January image due to a different orientation of the shadows, the new view perhaps allows a better comparison between different surface features. Indeed, the view incorporates the smooth surface along the comet’s neck, itself covered in dust and boulders, to pitted terrains interspersed with smoother patches, boulders and cliffs. 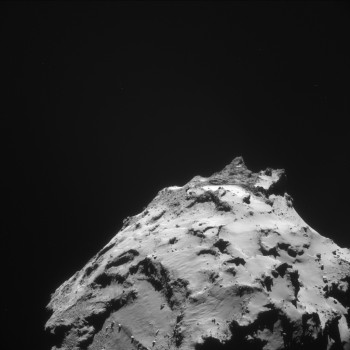 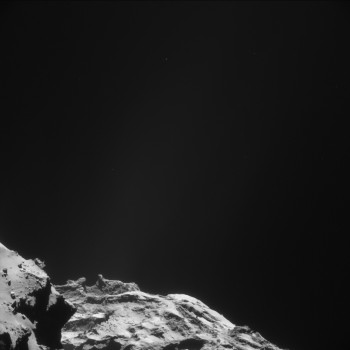 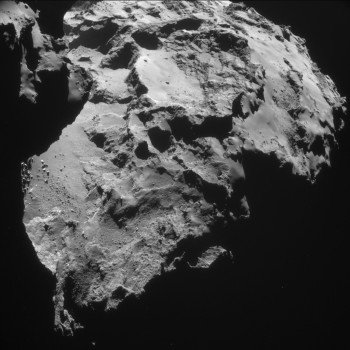