Landing site selection: the race is on

Let’s start with the ‘who’: to summarise, responsibility for the selection of the candidate sites lies with the Landing Site Selection Group (LSSG), which comprises engineers and scientists from Philae’s Science, Operations and Navigation Centre (SONC) at CNES, the Lander Control Centre (LCC) at DLR, scientists representing the Philae Lander instruments, and supported by the ESA Rosetta team, which includes representatives from science, operations and flight dynamics. The final Go/No Go decision for the primary landing site is given after a formal review by ESA, including the lander team, in mid-October. 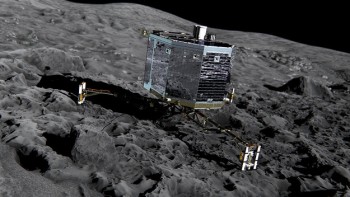 Artist impression of Philae on the surface of 67P/C-G. Credit: ESA/ATG medialab

Initially, the primary decider is whether or not landing on a given site is technically feasible, independent of scientific desirability. In this case, ‘feasibility’ relates to the factors concerning the orbiter’s trajectory to deploy Philae and the speed at which Philae is released, details of the descent (duration, the illumination conditions along the way, and radio communications with Rosetta as the orbiter moves away from the comet after separation), as well as conditions at touch-down.

Surface conditions include the illumination of the site at the landing time (it is preferred to land in day time), the slope of the surface and the orientation of the lander with respect to the illumination conditions and local topography. For example, too steep a surface may cause Philae to topple over – although its two harpoons, and ice screws in its three feet will help secure it onto the comet surface. Similarly, it goes without saying that hazards such as large boulders or deep crevasses should be avoided.

There must also be a balance between day and night to cater for the scientific needs of the instruments, as well as ensuring that the solar cells can recharge the battery to power the instruments, while not overheating the lander. Taking into account the comet’s rotation period (12.4 hours) and axis of rotation (see animation below), the LSSG will likely consider some sites close to the equator, offering roughly six hours daylight and six hours of ‘night’. Conversely, they will inevitably exclude sites that are either always in shadow or always in sunlight.

The sites should also allow for operations of the CONSERT experiment, which requires radio signals to be transmitted between the orbiter and lander through the body of the comet, in order to learn about the internal structure of the comet.

To help home in on the landing site and to determine the scientific potential of candidate sites, essential observations have been provided by Rosetta’s scientific instruments, in particular OSIRIS, MIRO, VIRTIS, ALICE, GIADA and ROSINA, and from the navigation camera, NAVCAM. As well as providing images, the instruments are helping to refine parameters such as the comet’s shape, rotation parameters and gravity field, along with measurements of surface temperature, outgassing, and the density and velocity distribution of particles in the coma, all of which play a key role in determining the feasibility of operations at specific sites.

Some possible landing regions were already tentatively discussed during the Rosetta arrival event held at ESOC on 6 August, based on very preliminary analysis of illumination conditions and initial flight dynamics inputs (see animation above, and watch a replay of the full science session here).

This week, up to ten possible sites are being laid on the table for a first round of dedicated discussions and for the LCC and the SONC to carry out a technical analysis on each site, ready to be presented at the weekend meeting. Participants of the LSSG will then review the results from the technical analysis and discuss the scientific merits of the candidate sites. By the end of the weekend meeting, as many as five sites could be selected for further detailed investigation.

The candidate landing sites will be announced on the ESA Portal on Monday.

The content of this blog post is based on a longer article published on ESA’s Science & Technology pages: Selecting a landing site for Rosetta’s lander Philae.