Rosetta’s OSIRIS team have produced a colour image of Comet 67P/Churyumov-Gerasimenko as it would be seen by the human eye. As anticipated, the comet turns out to be very grey indeed, with only slight, subtle colour variations seen across its surface.

However, as the comet rotated and Rosetta moved during this sequence, the three images are slightly shifted with respect to each other, and are taken from slightly different observing perspectives. Painstaking work is needed to superimpose the images accurately, which is one reason it has taken so long to come up with the first meaningful colour image of 67P/C-G. 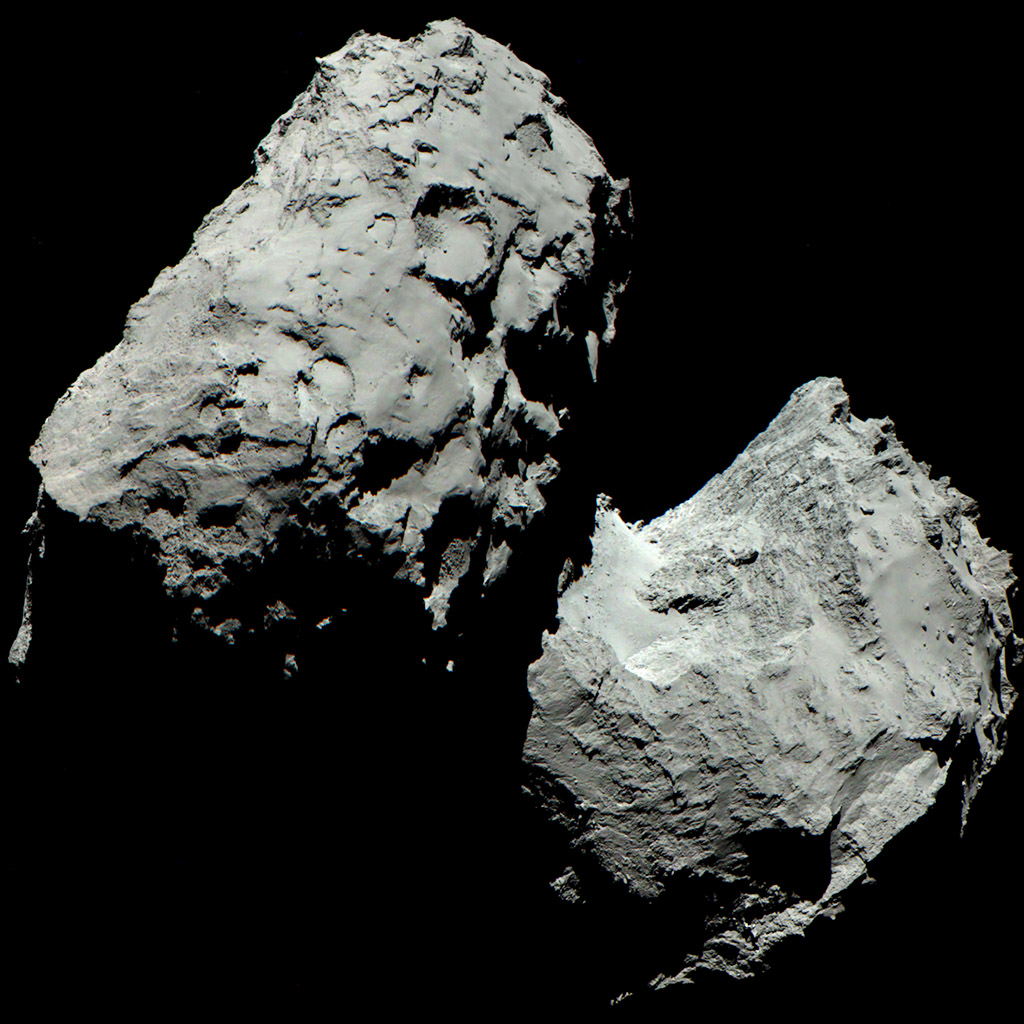 A colour image of Comet 67P/Churyumov-Gerasimenko composed of three images taken with the Narrow Angle Camera (NAC) of the scientific imaging system OSIRIS in red (centred at 744 nm wavelength), green (536 nm), and blue (481 nm) filters on 6 August 2014 from a distance of 120 kilometres. The image covers roughly 4 x 4 km at a resolution of about 3.9 metres per pixel. Credits: ESA/Rosetta/MPS for OSIRIS Team MPS/UPD/LAM/IAA/SSO/INTA/UPM/DASP/IDA

“As it turns out, 67P/C-G looks dark grey, in reality almost as black as coal,” says the instrument’s Principal Investigator Holger Sierks from the Max Planck Institute for Solar System Research (MPS).

As explained in earlier blog posts for the NAVCAM images, the intensity of the images has been enhanced to span the full range from black to white, in order to make surface details visible. But the colours have not been enhanced: the comet really is very grey.

A more detailed first analysis nevertheless reveals that the comet reflects red light slightly more efficiently than other wavelengths. This is a well-known phenomenon observed at many other small bodies in the Solar System and is due to the small size of the surface grains. That does not, however, mean that the comet would look red to the human eye. Natural sunlight peaks in the green part of the spectrum and the response of the human eye is similarly matched. Thus, overall, the comet would look rather grey to the human eye, as seen here.

Long before Rosetta’s arrival at the comet, ground-based telescope observations had shown 67P/C-G to be grey on average, but it was not possible to resolve the comet and see any surface details. However, now that OSIRIS is able to take images from close-up, scientists are surprised to see an extremely homogeneously coloured body even on a detailed scale, pointing at little or no compositional variation on the comet’s surface.

For example, any ice on the surface should appear brighter in the blue filter, leading to the appearance of blue-ish patches. This image contains no indication of any such icy patches, consistent with observations made by some of Rosetta’s instruments.

The overall grey colour of the surface shows that it is covered some kind of dark dust. Further studies using other combinations of the 25 filters in OSIRIS’ arsenal will focus on trying to understand the composition of this dust, by looking for different minerals such as pyroxenes, common in the Earth’s crust, or minerals containing water. OSIRIS will also be trying to detect various gas species in the coma surrounding the nucleus.