Comet activity is on the increase 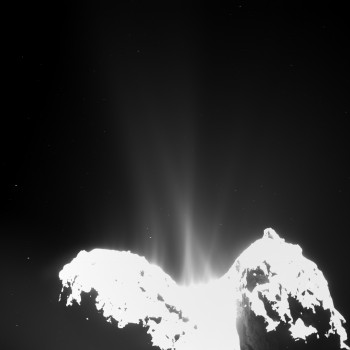 Comet 67P/Churyumov-Gerasimenko is showing a gradual, but clear, increase in activity, as can be seen in the latest images provided by the OSIRIS team.

While images obtained a few months ago showed distinct jets of dust leaving the comet, these were limited to the ‘neck’ region. More recently, images obtained by Rosetta’s scientific imaging system, OSIRIS, show that dust is being emitted along almost the whole body of the comet. Jets have also been detected on the smaller lobe of the comet.

“At this point, we believe that a large fraction of the illuminated comet’s surface is displaying some level of activity,” says OSIRIS scientist Jean-Baptiste Vincent from the Max Planck Institute for Solar System Research (MPS) in Germany.

From these images, the team wants to derive a better understanding of the evolution of cometary activity and the physical processes driving it.

“Being able to monitor these emissions from up close for the first time gives us much more detailed insights,” says OSIRIS Principal Investigator Holger Sierks. “But one image alone cannot tell us the whole story; from one image we cannot discern exactly where on the surface a jet arises.”

Instead, the researchers compare images of the same region taken from different angles, in order to reconstruct the three-dimensional structure of the jets. And, since under normal circumstances the comet’s nucleus would outshine the jets, the necessary images must be drastically overexposed to reveal the details of the jets, as shown in the image pair presented here (see below).

While 67P/C-G’s overall activity is clearly increasing, the mission’s designated landing site on the smaller lobe still seems to be rather quiet. However, there is some indication that new active areas are waking up about one kilometre from the landing site. These will allow the lander’s instruments to study the comet’s activity from an even closer distance.

Today, 67P/C-G is about 470 million kilometres from the Sun. Based on a rich history of ground-based observations, scientists expect a comet’s activity to pick-up noticeably once it comes to within 300 million kilometres of the Sun; for 67P/C-G – and Rosetta – this ‘boundary’ will be crossed in late March 2015.

Below: Two views of the same region on the neck of Comet 67P/Churyumov-Gerasimenko (the larger lobe is to the right and the smaller lobe is to the left in this orientation). The first image was taken with an exposure time of less than a second and shows details on the comet’s surface. The second image was overexposed (exposure time of 18.45 seconds) to bring out the details of the jets arising from the comet’s surface. The images were obtained by the OSIRIS wide-angle camera on 20 October 2014 from a distance of 7.2 kilometres from the surface.
Credits: ESA/Rosetta/MPS for OSIRIS Team MPS/UPD/LAM/IAA/SSO/INTA/UPM/DASP/IDA 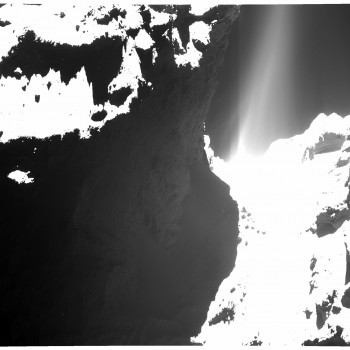