While many of us spend time trying to eliminate dust, Rosetta’s COSIMA team have a different attitude – they are actively attempting to catch it.  Today we heard that they succeeded and have the picture to prove it!

At the European Planetary Science Congress (EPSC) held in Lisbon, Portugal, the COSIMA team presented an image of the first dust grains collected by the COSIMA instrument when Rosetta was at a distance of less than 100 km from the nucleus of comet 67P/Churyumov-Gerasimenko.

COSIMA studies dust in situ by capturing grains on small (1 cm by 1 cm) target plates, first imaging these with an optical microscope and then analysing the composition of selected grains using a secondary ion mass spectrometer. The instrument is designed to investigate dust grains larger than about 10 microns. 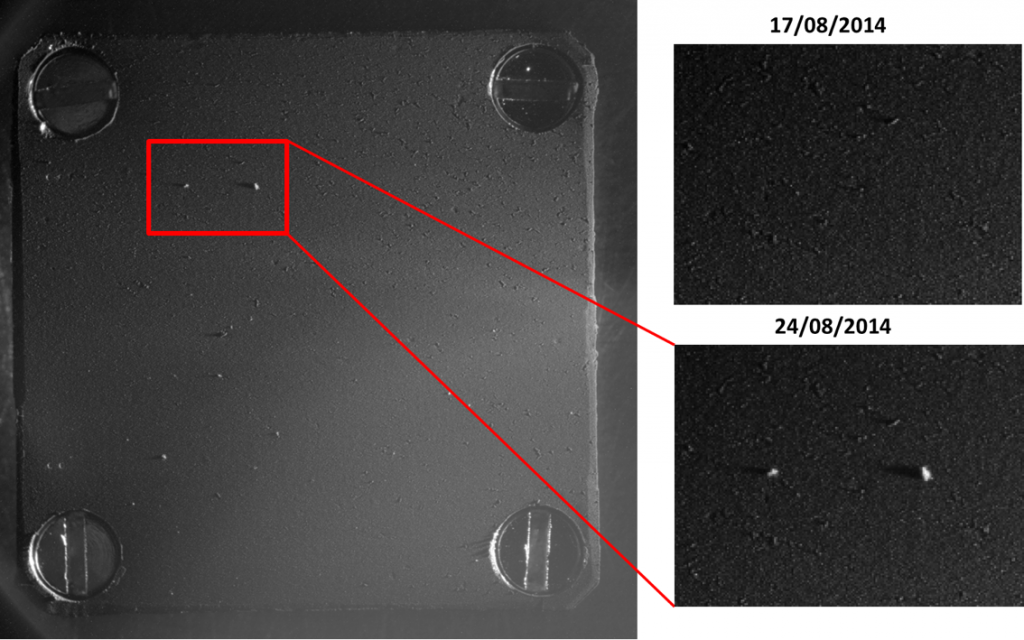 COSIMA catches first dust grains. Left: an image of the target plate (measuring 1 cm by 1 cm) on which the grains were collected; right: a section of the plate showing the state on 17 August (top) when no dust grains were visible and 24 August (bottom) when some large dust grains were detected. The plate is illuminated from the right by LEDs and the length of the shadows is proportional to the height of the dust grains. The resolution of the image is 14 microns per pixel.
Credit: ESA/Rosetta/MPS for COSIMA Team MPS/CSNSM/UNIBW/TUORLA/IWF/IAS/ESA/
BUW/MPE/LPC2E/LCM/FMI/UTU/LISA/UOFC/vH&S

Early in the morning of 11 August, the first of COSIMA’s 24 target plates was exposed to space. As the team mentioned in a previous blog post, models of 67P/C-G’s coma suggest that at the present low level of activity, it should be comparable to a high-quality cleanroom – in other words, there should not be many dust particles. They therefore decided to expose this plate for at least one month and to check back periodically to see if they had been lucky and something had been picked up at this early stage.

On 24 August, when the COSIMA team looked at the image of the plate they saw a number of large dust grains from the comet on a target that had been pristine when examined one week before. A first examination of the plate indicates that the largest two grains are about 50 microns and 70 microns in width, comparable to the width of a human hair.

Scientists from the COSIMA team are now examining the image of the target plate in detail to determine the locations of the dust grains. Some will be selected for further analysis: the target plate will be moved to place each chosen grain under an ion gun which will then ablate the grain layer by layer. The material is then analysed in a secondary ion mass spectrometer to determine its composition.

The results of these investigations are eagerly awaited since these are among the first dust grains to have been collected from beyond the Solar System’s snow line – the distance from the Sun at which ice grains can form.

COSIMA is one of three instruments on Rosetta that will study cometary dust, the other two being GIADA and MIDAS. In mid August, the GIADA team reported the detection of four dust grains, ranging in width from a few tens of microns up to a few hundreds of microns, collected when Rosetta was between 814 and 179 km from the comet.