During May-August, Rosetta is executing a series of 10 orbit correction manoeuvres (OCM – aka thruster burns) to line itself up for arrival at comet 67P on 6 August – approximately one burn every two weeks in May and June, and one per week in July (see chart below).

The first, on 7 May, was quite small, achieving a ‘delta-v’ (change in velocity with respect to the comet) of just 20 m/second. But the next OCMs – Nos. 2, 3 and 4, referred to as ‘NCD burns’ for Near Comet Drift – are whoppers!

The second was carried out on 21 May, which we dubbed the #BigBurn: it ran 7hrs and 16mins, used 218kg of propellant and delivered a total delta-v of 289.59 m/second – a tiny performance difference of 0.52% with respect to that planned.

It was one of the longest thruster burns conducted by any of ESA’s spacecraft.

“The planned delta-v for tomorrow’s burn is a bit less than what we forecast back in April, but it takes into account the results delivered on 21 May,” says Rosetta Spacecraft Operations Manager Sylvain Lodiot.

“For the rest of the series, we’ll adjust each burn based on the actual performance of the previous and on the continuous improvement of our knowledge of the comet’s orbit.”

The comet’s trajectory is being regularly refined by analysing images taken with the OSIRIS camera and the navigation camera.

Gerhard Schwehm, Cometary scientist, ESA, gives an overview of the Rosetta mission at the ‘Space for Earth’ space pavilion at ILA, the Berlin Air and Space Show, on 24 May 2014. Credit: ESA–M. Pedoussaut

Wednesday’s burn will be triggered automatically by pre-uploaded commands, and will get underway at 16:21 CEST (14:21 UTC), spacecraft event time.

The burn will take place during a ground  station communication slot, and the team at ESOC will monitor telemetry – spacecraft health and status signals – in real-time via ESA’s 35m tracking station at New Norcia, Australia.

During the 21 May OCM, teams at ESOC monitored parameters such as temperature and pressure for the four thrusters (the axial thrusters – i.e. the ones that are pointed along the spacecraft’s Z-axis) that are being used to deliver the OCM thrust. All values were as expected.

The rest of the spacecraft’s systems – including power, thermal, attitude and orbit control, data handling and communications – operated as expected.

All in all, Rosetta’s working well, despite the fact that the orbiter’s thrusters are being used at lower pressure than originally planned because of a Reaction Control System leak that occurred in August 2006

“We are operating the spacecraft propulsion system at a pressure substantially below the design value, as a result of significant tuning of the AOCS [attitude and orbit control system] to avoid the issues previously observed,” says Sylvain.

“The system is providing the thrust we need to get us where we need to be.”

Rosetta was launched with 1719 kg of propellant, and currently has enough remaining to arrive at the comet and conduct planned science.

On 23 May, the spacecraft passed the 4 AU (Astronomical Unit) boundary, at 597 million km from the Sun. 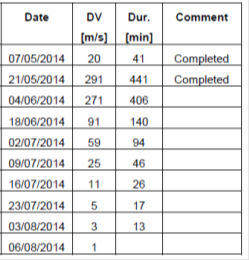 Note: The primary risk to the mission involves the orbiter’s thrusters, which will have to perform at lower pressure than planned because of a Reaction Control System leak that occurred in September 2006.