The game of risk

After the orbit insertion of the ExoMars Trace Gas Orbiter mother ship (TGO) and the hard touchdown of the Schiaparelli entry, descent and landing demonstrator module (EDM), I made some comments in one of my last blog posts explaining why, to my mind, we should not feel completely frustrated and disheartened. But I had to accept that many did not share that view, expecting me instead to make clear my dissatisfaction in far more blunt terms.

While thinking about this, I happened to look at the reporting of SpaceX’s third attempted landing of a first rocket stage on a drone ship when, unfortunately, the stage exploded after one of its legs failed to deploy correctly.

It is interesting to compare the media reaction to these events.

This is how the Schiaparelli crash was reported in the British newspaper, the Daily Express:

That seems fair enough, you might say. They got their facts right, as did the German newspaper, Die Welt, reporting here on the Falcon 9 setback, in a headline translating as “SpaceX in yet another failed landing”: 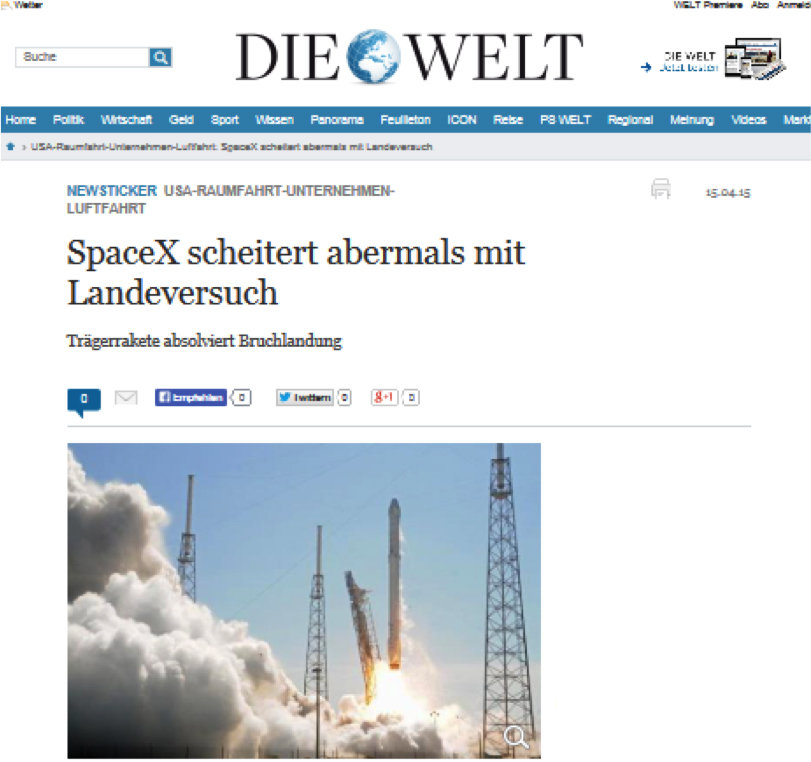 Now, take a look at this example of US coverage of that same event:

Elon Musk himself went on to tweet as follows:

It is clear that both events bear certain similarities: the main goal of ExoMars 2016 was (and still is) to have the TGO in orbit to do science and act as a relay for ExoMars 2020. The EDM was a test to investigate the different stages of landing. That being the case, it actually performed rather well and we obtained a lot of data up until the impact on the surface.

The same is true in the SpaceX case: the rocket’s satellite payload was successfully brought into space, and although the trial landing of the first stage was not 100% successful, it did provide information on how to proceed in future.

These different perceptions on either side of the Atlantic are also representative of our differing cultures. In Europe we admire the risk-taking entrepreneurs in the US and at the same time are very unhappy with any failure. The culture can be described thus: we are ready to take any kind of risk, as long as success is guaranteed.

But risk-taking means that you accept a probability of failure well above 0. Especially in space, the environment is such that you are obliged to take risks because the margin between success and failure directly influences not only the necessary budget but also the time it takes. If I, as a civil engineer, were to design a rocket comprising all the safety features I would usually prefer to take into consideration, it would most probably be much too heavy.

Which brings me to my point: let us continue to take risks while taking the possible amount of damage into account when we decide on the extent of the safety measures required.