At 02:51 GMT this morning commander Sergei Volkov, Andreas Mogensen and Aidyn Aimbetov radioed in with ground control and were informed of the expected thruster burns that will take their Soyuz TMA-18M spacecraft to the International Space Station.

In a series of three large and three smaller burns starting from 05:37 GMT until 07:12 GMT the spacecraft will close in on the weightless research laboratory. The first burn will start at 478 km out and each subsequent burn will move them closer. By second burn Andreas, Sergei and Aidyn will be at 203 km from the Station, then at 06:23 GMT they will be at 97 km. At 07:06 GMT they reach 2.5 km, four minutes later 1.1 km, two minutes after that they will be at 640 m from their destination.

These times and burns are estimates calculated on ground and can change. The astronauts will radio in again at 04:28 GMT and will be in their Sokol pressure-suits, seated in the command module, with the hatch closed to the orbital module ready for the rendezvous and docking sequence.

A question of attitude 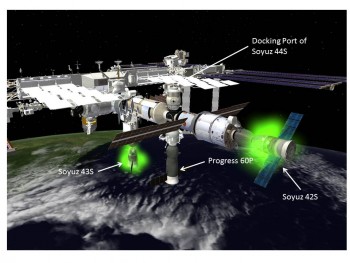 The International Space Station has two attitude-control systems that work together to keep the orbital complex pointing in the right direction. At around 05:40 GMT NASA’s mission control in Houston, USA, will hand over the Station’s attitude keeping to Moscow Mission Control in Russia who will flip the Station 180° using its thrusters so the Russian segment is flying forward.

Docking is expected at 07:42 GMT and you can watch the final approach and hatch opening here.