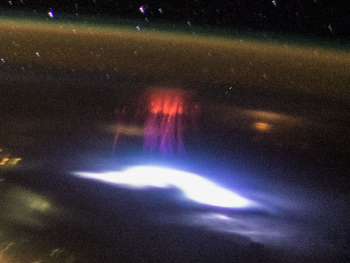 A red sprite captured on camera from the Space Station on August 10 over southern Mexico. Credit: NASA

The sky lit up, and for a few milliseconds a reddish, jellyfish-like, shape extended its electrified tentacles over Mexico. It was a rare capture on camera by an astronaut on the International Space Station earlier this month. Scientists call it a ‘sprite’, a powerful electric discharge that Andreas will try to photograph during his ‘iriss’ mission.

The hunt for thunderstorms is on. Little is known about the dramatic shapes and lights that occur high up in the atmosphere. The first ever red sprite photographed from the ground was only taken in 1989.

Now for the first time, a European experiment will look at them with a thundercloud imaging system 400 km above Earth. The experiment is called ‘Thor’ after the god of thunder, lightning and storms in Nordic mythology. 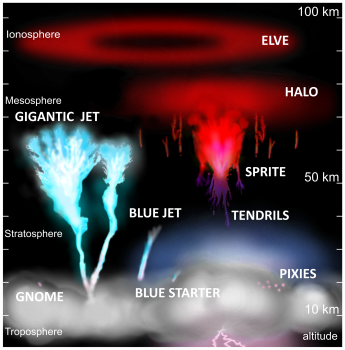 Andreas will test the system while chasing red sprites, blue and gigantic jets from the Space Station over Earth at night. These luminous events are electrical discharges that can climb as high as 90 km into the atmosphere at the edge of space.

Researchers are also interested in cloud turrets during daytime. These towers of water vapour rise from the top of thunderstorms and can reach more than 18 km high. Scientists want to measure how much water they carry into the stratosphere, the layer between 10–50 km of the atmosphere, and how lightning influences their formation.

Electrical discharges change the concentration of greenhouse gases in the atmosphere. Water vapour is a very important greenhouse agent in the stratosphere. 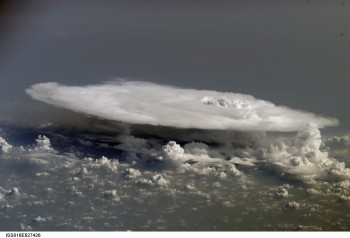 “The role of thunderstorms in our climate is significant,” explains Torsten Neubert, science team coordinator at the Technical University of Denmark (DTU).

“Thor will help improve the predictions about the future climate and its consequences.”

The Danish scientist believes that interest in the field will explode in the coming years with the next generation weather satellites and Thor is the first step.

Back in the 1980s, Torsten spent part of his career in the US analysing electron beams injected from the Space Shuttle into the atmosphere to generate artificial aurora. That experiment gave him a good background to study thunderstorms. “I came back to Denmark and was fascinated by the red sprites – something so magnificent in our environment, and yet unknown for so long,” he says.

Europe has been his playground for thunderstorms since 1999, when the first sprites were detected from a mountaintop in the Pyrenees. “European teams are relying on strong collaboration across borders and institutions. With the wealth of data we expect from Thor we look forward to taking the lead worldwide.”. 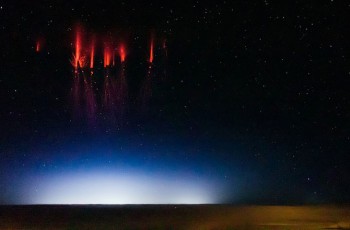 The red colour of the sprites is caused by nitrogen interacting with electricity in the upper atmosphere. Credit: Jason Ahrns

Catching flashes as the Space Station flies over the planet at 28 000 km per hour is not an easy task. There is little time and the flashes can be any sizes. Sprites last 20 milliseconds at most, and to capture them on camera is a real challenge. They received their name because of their elusive nature.

Andreas will record thunderstorms from a window in the Russian Pirs module equipped with an ordinary reflex camera. Scientists on Earth will predict the location of thunderstorms up to three days in advance.

The astronaut will receive the coordinates of a few targets per day, together with the times and instructions on which lens, filter and camera settings to use. For ten minutes, Andreas will only have eyes for the stormy weather in our atmosphere.

Why from the Space Station? 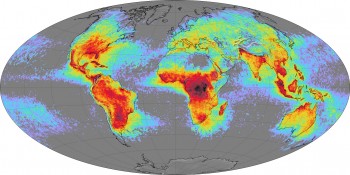 Apart from covering all the main thunderstorm regions, the International Space Station brings scientists as close as possible to the electric phenomena. Its great vantage point has the lowest orbit available for observation at around 400 km altitude – imaging satellites usually operate at 800 km.

Some of the most violent electric discharges are very difficult to capture from the ground because the atmosphere blocks radiation. From space Andreas will be able to judge himself where to aim the camera, to zoom in and follow interesting regions as the Space Station passes by.

If everything works as planned, the Thor experience will culminate by teaming up with the ASIM experiment on a platform outside the Columbus module in 2017. The ASIM experiment will attempt to observe two ultraviolet optical bands, as well as the X- and gamma-rays, a first for the Space Station. European scientists are hoping to get a new understanding of physics out of it.