Return of the Mars Webcam

The smallest instrument on Mars Express -- VMC (Visual Monitoring Camera), the Mars Webcam -- is finally returning to service following the major anomaly that struck Mars Express at the end of summer 2011. 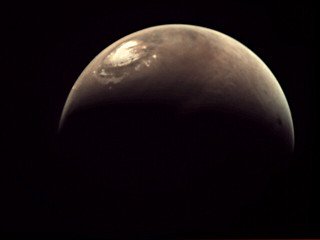 Although our prime science campaign has been back to 100% of the level of operations from before the anomaly for some months now, we were still working hard on finalising our new operations concept and ensuring that we had safely and efficiently returned to operations. With much of that complete, we managed to focus on how to get VMC working again under the new ops concept and on 6 May we conducted the first test observation since the 2011 anomaly.

We are very proud and excited to have VMC back on the way to normal service and very happy to present the image from the first test observation.

Read on for more details about this image and the return to service of VMC.