Two months of European science on the Space Station

It has been over eight weeks since our last science update on the International Space Station for ESA astronaut Thomas Pesquet. Listing everything he has done would be impractical so this time here’s a recap of European-led science in space including tasks done by other astronauts. For a daily list of activities by all astronauts this NASA blog gives detailed information.

For years many external facilities run outside the Space Station with little astronaut involvement. Throughout Thomas’ schedule the Vessel-ID system is tracking ships on Earth to test low-flying radio receivers that could offer global marine-traffic monitoring. At the moment large ships are only tracked near the coast using traditional radio-beacons, if monitoring from above using the same technology works a global system could be set up that would hinder pirates, enforce captains to use established sea shipping routes, help find more environmentally-friendly shipping lanes and save lives at sea. Vessel-ID was already instrumental in saving a life:

SOLAR has been running for nine years monitoring our Sun from the Columbus laboratory to help improve our models of the Sun and understand climate change. Its time has come and Thomas shut it down on 15 February. 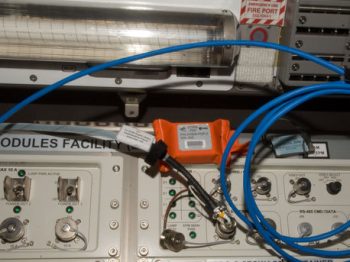 The data from Dosis-3D dosimeters that are recording radiation levels inside the Space Station  was downloaded to Earth for analysis once a month.

Thomas also wore the active radiation dosimeter which is the first experiment to monitor radiation received by astronauts actively. ESA active dosimeter will give an idea of how much radiation is received at each moment it is worn – on Earth we are protected by cosmic radiation by the atmosphere, but in space astronauts get the full blast and we need to know more.

The Geoflow-2 experiment continued running in the Fluid Science Lab. Geoflow-2 is an interesting experiment that is recreating Earth’s core in space to help us understand what is going on beneath our feet. The experiment investigates how fluids behave as they rotate inside spheres under a force field – like the rotating magma inside Earth that creates our magnetic field. This kind of experiment could not be run on Earth as gravity would be stronger than the force field created by the experiment, interfering with results.

The European Physiology Module was used to download the data as well as results from the Sarcolab-3 session using Mares and some diagnostic data for the PK-4 experiment. PK-4 is a joint Roscosmos-ESA experiment that uses dust particles in charged gas to illustrate how atoms behave in fluids. Doing this research on Earth is not possible – the dust particles would fall with gravity and the simulated atoms would not behave realistically. In the first week of February Thomas wrapped up the instrument’s hard disk in bubble wrap to return to Earth so researchers can analyse the data. On 9 February Oleg Novitsky had a refresher course on how to use PK-4 to prepare for the next data campaign starting soon.

Thomas and cosmonaut Sergei Ryzhikov completed the second Sarcolab session with Mares and packed up the machine.

The first week of Skinsuit started by Peggy Whitson taking measurements of Thomas body. Skinsuit is a tight-fitting garment that aims to literally squeeze an astronaut’s back together to stop the spine expanding in weightlessness. Astronauts can grow up to 7 cm in space as gravity no longer pulls them downwards resulting in back pain for many. Putting Skinsuit on was moved to a later date as the tight-fit restricts blood flow and would interfere with a different experiment – Fluid Shifts Dilution. On 2 February 2017 Thomas donned the Skinsuit with Peggy helping. The next day the duo measured his height again to note any changes.

NASA astronaut Shane Kimbrough completed his Space Headaches questionnaire that is looking at the headaches many astronauts suffer from in space. This experiment is simple – a weekly questionnaire for astronauts – but will help researchers understand how and what type of headaches astronauts can endure to help find ways to stop them. 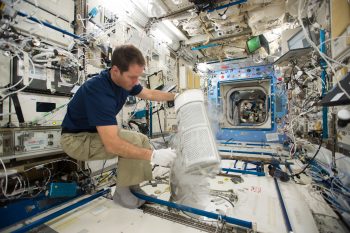 In January 2017 Oleg Novitsky took part in the EDOS-2 and Immuno-2 experiment as a test subject by donating his blood. Russian colleague Andrei Borisenko drew the blood while NASA astronaut Peggy Whitson stored the samples in the Station’s –80°C freezers.

The Early Detection of Osteoporosis in Space experiment is  looking at changes in bone structure before and after flight by studying markers in blood and urine, as well as through a tomography scan. All astronauts lose up to 1% of their bone mass each month in space, similar to osteoporosis. Obviously this is worrying for longer missions to far-away planets so researchers are interested to find out if they can detect the changes quickly and also when the changes occur. This research will help detect osteoporosis on Earth, a disease that most people over 55 suffer from to some degree.

The Immuno-2 experiment is looking at stress in space. It takes a holistic approach to consider how stress affects our immune system. Using brain scans, monitoring breathing and looking at samples from hair and blood, the researchers hope to understand how living in stressful conditions affect immune systems.

Also in January a run of ESA’s Materials Science Laboratory in the American Destiny lab was started. Heated to 1400°C and allowed to cool the metal-casting process is observed to understand the microstructures of alloys and how they can be improved on Earth to avoid fractures, increase strength and lower weight for example. This time a sample of aluminium–magnesium–silicon alloys was used. The experiment was run from ground control without astronauts involvement once the cartridge with the alloy was inserted.

More sessions of the Aquapad water tester were conducted by Thomas Pesquet. This experiment is looking at simplifying recycled water testing on the Space Station. To count the bacteria grown on a 3D-petri dish Thomas used the EveryWear astronaut-app to take a picture of the spots of bacteria that then automatically calculates the safety of the water.

Preparing for the future

Thomas took part in the Haptics-2 experiment that connected a joystick in ESTEC, the Netherlands, with a joystick on the International Space Station, that allowed Thomas to feel what the joystick on Earth was feeling. More in this blog post.