Proxima launch: I was there! 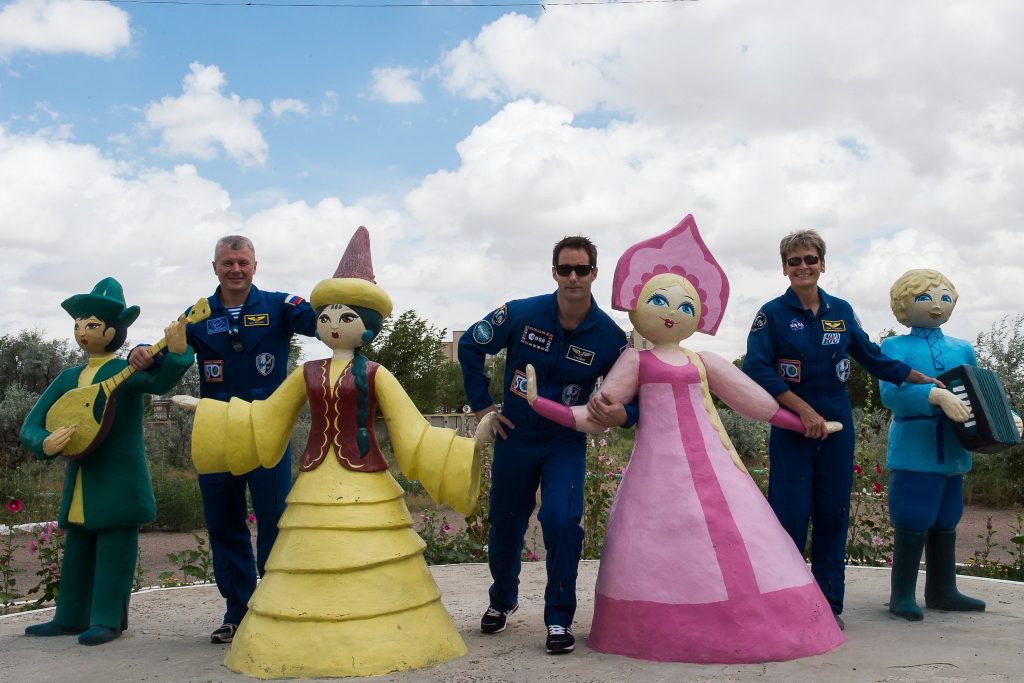 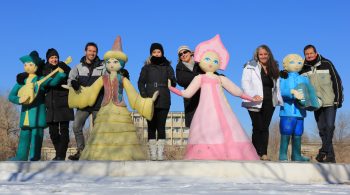 On launch day our group take a similar picture to Thomas, Oleg and Peggy in June.

ESA France editor and space fan, Brigitte Bailleul, went to Baikonour and saw the launch of Thomas Pesquet on november 18. This is her logbook entry for the hours preceding the launch.

On 17 November 2016 a number of tourists were at the Baikonur Cosmodrom to watch the Soyuz launch with Thomas Pesquet, NASA’s Peggy Whitson and Roscosmos cosmonaut Oleg Novitsky to the International Space Station.

I had three dates in my agenda that night: watching the crew leave the cosmonaut hotel where they had been in quarantine for 15 days, watching them leave for the Launchpad dressed in Sokol suits, and of course, the launch.

Leaving the hotel went too fast. The crew walked quickly to the bus waiting for them without stopping once – unlike superstars on a red carpet. They hardly had time to wave and react to a few people calling their names before the trio were in the bus. They all smiled and Thomas seemed relaxed, happy, and emotional towards his girlfriend and family. It was a touching moment for me too, watching the scene of Thomas sitting in the bus with his partner on the other side of the glass. Their hands against the glass will be etched into my memory for a long time. Everything happened so fast that I forgot to take any pictures!

After the bus left our group had a few moments to visit the “Cosmonaut Alley” where each Soyuz passenger plants a tree shortly before launch – a tradition that started with the first human spaceflight of Yuri Gagarin. Located in the gardens of the Cosmonaut Hotel, this area is strictly off-limits to the public during quarantine. Thomas Pesquet’s tree and Yuri Gagarin’s tree are at opposite ends so they are easy to find even if the signs are all in Cyrillic script.

The countdown to launch puts us on a tight schedule so we hopped into a minibus that took us to the warmth of the cosmodrome museum – it was -15°C outside! We had a little more than an hour before our next date outside building 254 where the crew where putting on their blue and white Sokol suits. We could see inside where Peggy, Thomas and Oleg where donning their suits and I could observe them from behind the window. Thomas’ facial expressions seemed to me to be very focussed, a few smiles, a few laughs but mainly a show of intense concentration. 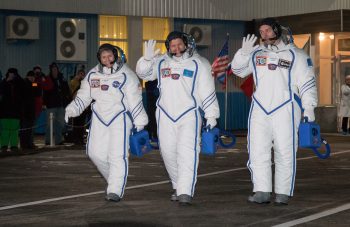 When the crew left the building they stopped at the flags to some shouting of “Allez Thomas!” Thomas was less than five metres from me when he turned in our direction. I was standing next to Sebastien – who had been with Thomas on his first weightless experience in a parabolic flight – and space agency representatives.

The crew paused for a moment to salute the cosmodrome authorities and Roscosmos before climbing aboard their bus. I think the crew looked a little like the Michelin Man in their overalls they wore to protect from the cold. I watch the family wave goodbye another time and  I realise how trying this must be. The goodbyes have not stopped since the start of quarantine.

The backup crew also enter the bus and this time I see ESA astronaut Paolo Nespoli: Thomas’ backup for this flight. On the way to the Launchpad the bus will take one more stop to pay homage to the tradition Yuri Gagarin started when he urinated against a wheel of the bus. After years of training, work and sacrifices, Thomas will enter his Soyuz to be launched to the International Space Station where he will work for the next six months in space.

We follow our guides inside a building down a very long corridor with framed photos of spaceflight before arriving in the same room Thomas was just moments before. We take some photos and continue our visit of the museum for another hour. We are not the only group to have come here and we meet some Air France pilots that are here to support Thomas too. We manage to take a group photo with a smiling ESA astronaut Luca Parmitano who happened to wander by. Less than two hours to launch… I have followed Thomas for many years, mainly on social media: preparing for Proxima with  training all over our planet in Europe, Russia, USA, Canada and Japan. I almost feel part of the family and realise I will see him launch shortly to become the tenth French astronaut in space.

It is 01:30 in the morning and we can finally move to the observation site around 1300 m from the Launchpad. I am speechless when I see the rocket illuminated by spotlights. I am lucky enough to have seen a launch from the Kennedy Space Center in USA but always from 5 km away. It is surreal to be so close.

Installed on the steppe of Kazakhstan a large screen shows images from inside the capsule where Thomas and his crewmates are waiting. Minutes pass and everyone around me are working on camera settings. “The support structure is opening” exclaims my neighbour in waiting. All talk comes to a stop and silence reigns on the steppe – aside from the Russian commentary that starts directly next to us. 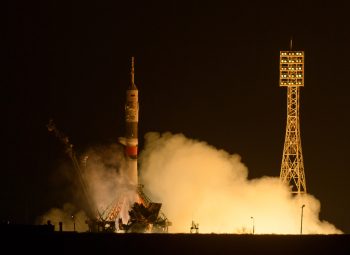 The launch is an explosion of light when the motors fire up emitting combustion from 45 m above the Launchpad. Ten seconds later – it seemed like an eternity – the four counterweights that keep the launcher in place move away under the force of the engines and the Soyuz starts to move towards the skies. We are so close that the sound hits us almost instantly and we can feel the vibrations. I hold my breath for many long seconds but everything is “nominal” as the Moscow control centre keeps repeating.

I don’t lose sight of the launcher until it is but a star among the many others above the skies of Kazakhstan. I realise that Thomas has left Earth and accomplished his childhood dream that might have seemed naïve at the time but is now a reality.

I feel proud, relieved that it went well and grateful to all the teams who made this launch and mission possible. A few days after witnessing this magical moment I still have stars in my eyes, a smile on my lips and the feeling that I was part of a magical moment that I will never forget.