Proxima Mission Director Roland Luettgens sent us this update on launch and docking:

The launch of Soyuz MS-03 spacecraft occurred at 20:20 GMT with separation of the launch vehicle at 20:29 GMT. The ascent was normal. The Motion Control System was tested and the docking probe was extended. All Soyuz systems are functioning.

The rendezvous manoeuvres were completed without problem. The Soyuz TV system required for docking was tested as well and with normal results too.

The preparation for the docking on Saturday is ongoing. The automated rendezvous sequence will start at 19:39 GMT on Saturday 19 November evening. 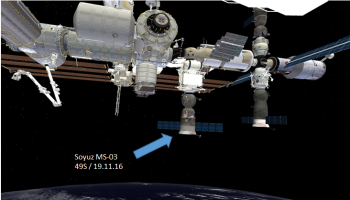 The docking itself will be on the so-called MRM1 Nadir port of the International Space Station and will occur at around 22:00 GMT. 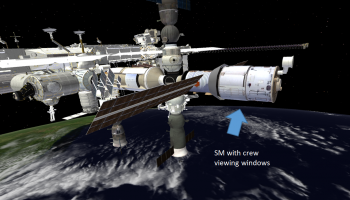 The automated docking manoeuvre can be seen by the three astronauts inside the Space Station. They can look out of the windows of the Russian Zvezda Service Module to see the Soyuz arriving.

The final approach will start at a distance of 185 m from the Station and will lead to a docking at the docking port on the bottom of the ISS. Five minutes before docking the sun will disappear behind Earth, this is calculated so the reflectors and sensors on the spaceraft do not get interference from sunlight.

The day after docking will be a crew rest-day so the astronauts can get settled into the International Space Station and get ready to start working on Monday.

Thomas will start with a busy day on Monday, with almost seven hours of work time scheduled for him.