From Sea to Space: What happens at Europe’s Spaceport before a launch?

With no launches planned for May, I took the opportunity to attend meetings in Europe and take some leave. Spring is the best time of the year; trees and flowers signal that they are alive and well, temperatures are fresh, the days are long… what is there not to like?

But time flies quickly when you are having fun, so after a few weeks, I was content to board the plane and head back to this fascinating place where I have the pleasure to live and work. Before I left for Europe, the campaign for the 248th Ariane flight (named VA248) had started and we are now on the final stretch in our preparations for it. Lift off is scheduled for June 20, 18:43 local time (i.e. 23:43 in Europe).

So what actually takes place at Europe’s Spaceport when a launch is prepared? There are three main activities :

These three lines of activity take place in parallel with coordination points along the timeline to ensure that we are all in sync. See below the campaign in pictures (thanks to the CNES Optique/video service who are always present whenever something interesting is going on). 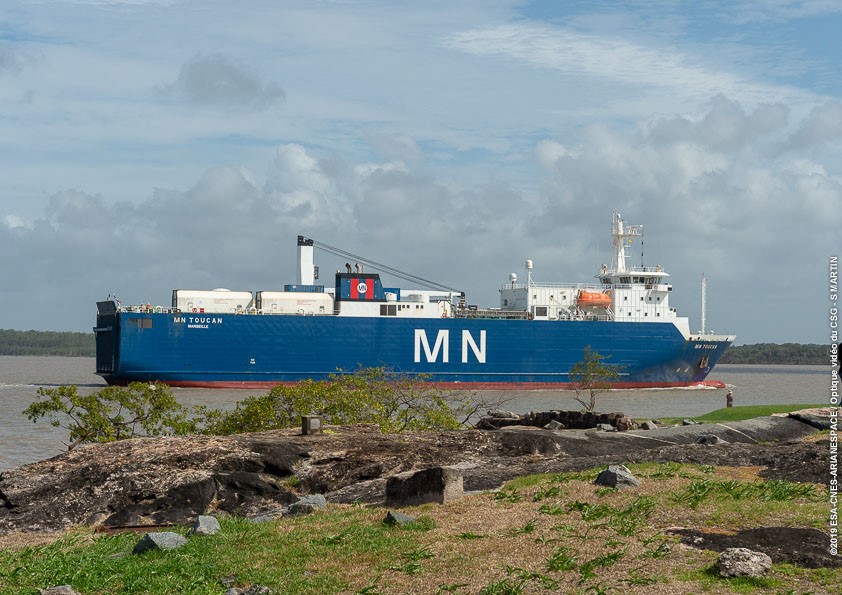 Arrival of the boat containing the launch vehicle 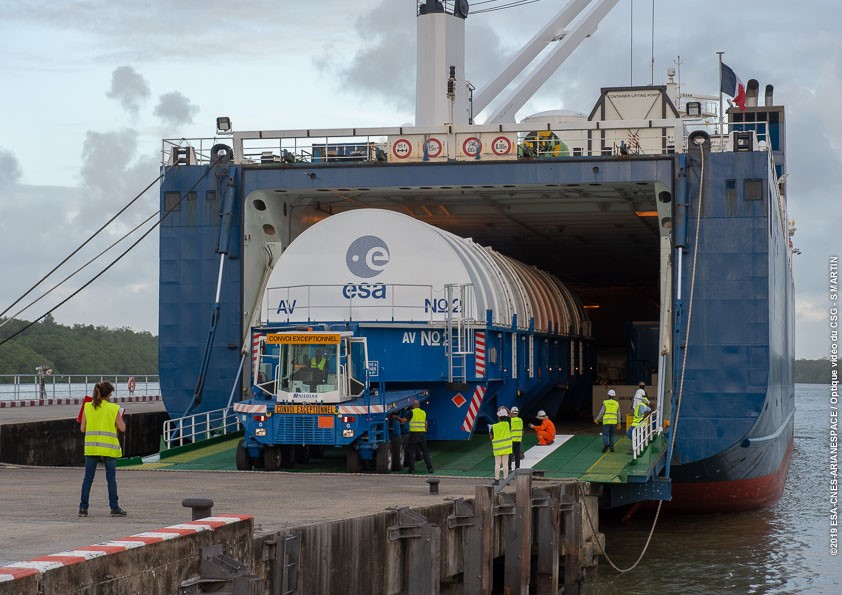 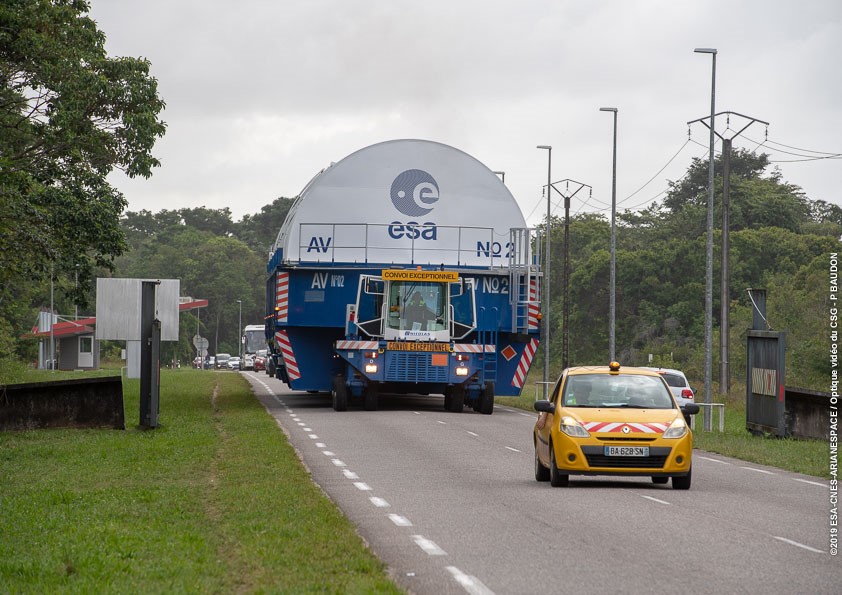 Transporting the main stage from the port to the launch vehicle integration building. The core stage is 5.4 m in diameter… so inside the container, it fills the road

Moving the special double launch adaptor which allows to fit two satellites under the fairing. It is called the SYLDA (SYstème de Lancement Double Ariane, which is French for Ariane Double Launch System).

May: the first client (payload) arrives 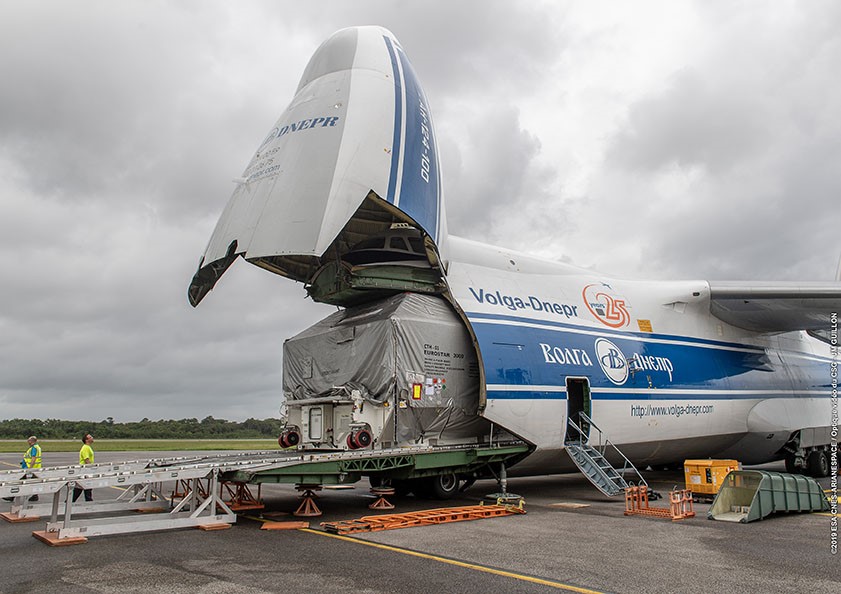 May 14 saw the arrival of the first client, the U.S. AT&T satellite T-16, at the airport in Cayenne, French Guiana, by an Antonov airplane.

The next day begins the first step: unpacking. This means opening the container and begin installation on the work stand.

Then, after the integration of upper composite (not pictured) comes the fit check. The fit check is on the adaptor to be used for flight, and it needs to be perfect.

After this step, it is back to the stand. Preparations continue until the satellite is ready for fuelling, which takes a while. 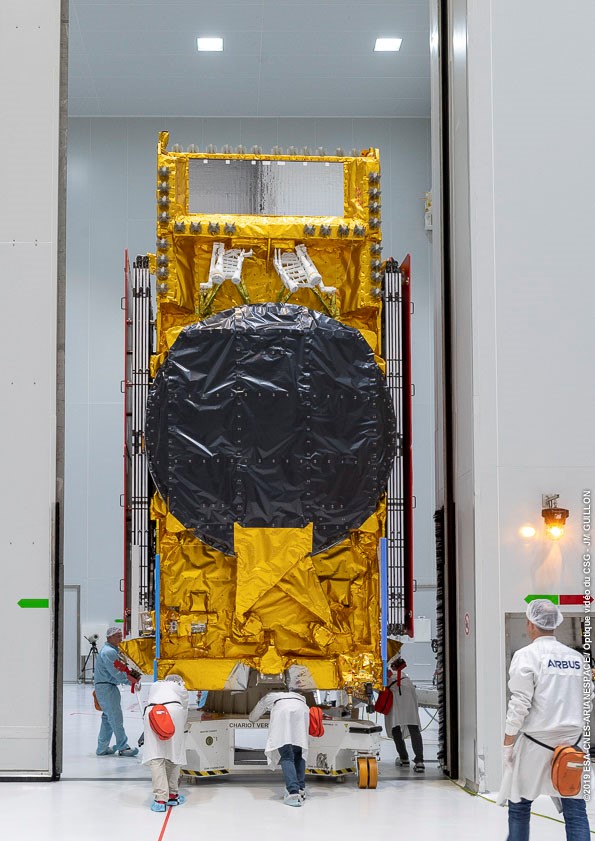 On May 27, the client is ready for fuelling. This is the transfer of it from the preparation hall to the fuelling hall (which are conveniently located in the same building) and is done by hand. 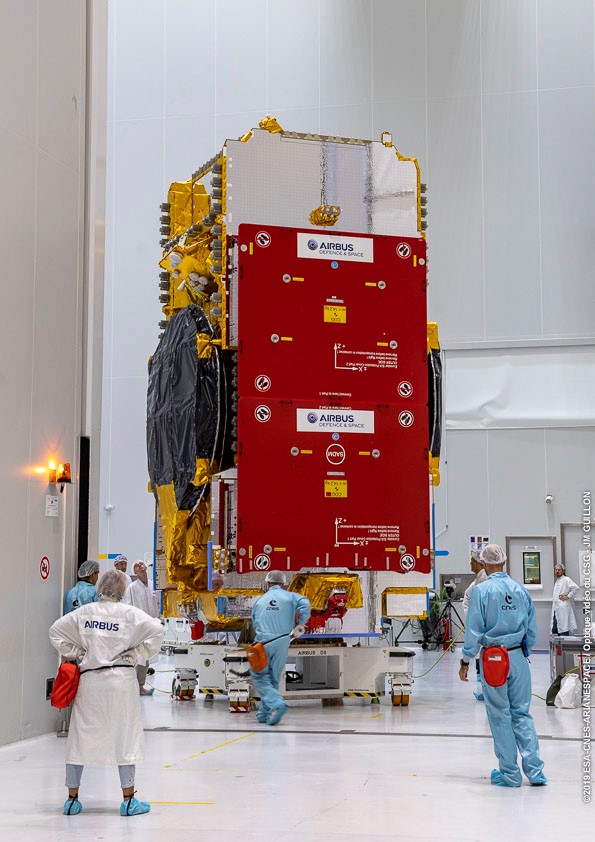 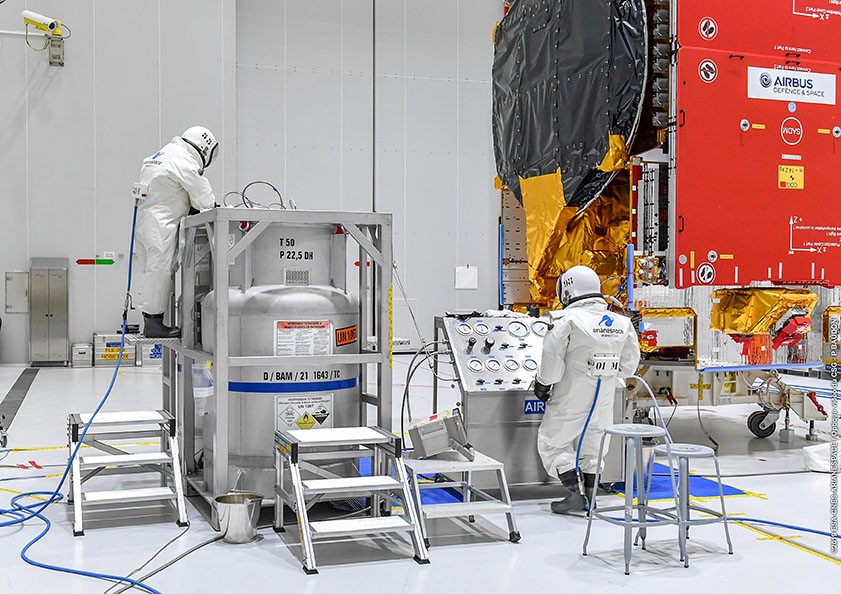 The next day, the fuelling starts. It is a hazardous operation so only the required number of operators are allowed in the room whilst all others are in the control rooms, offices, and safety room. Firemen from the French fire brigade are on hand in case of emergency. 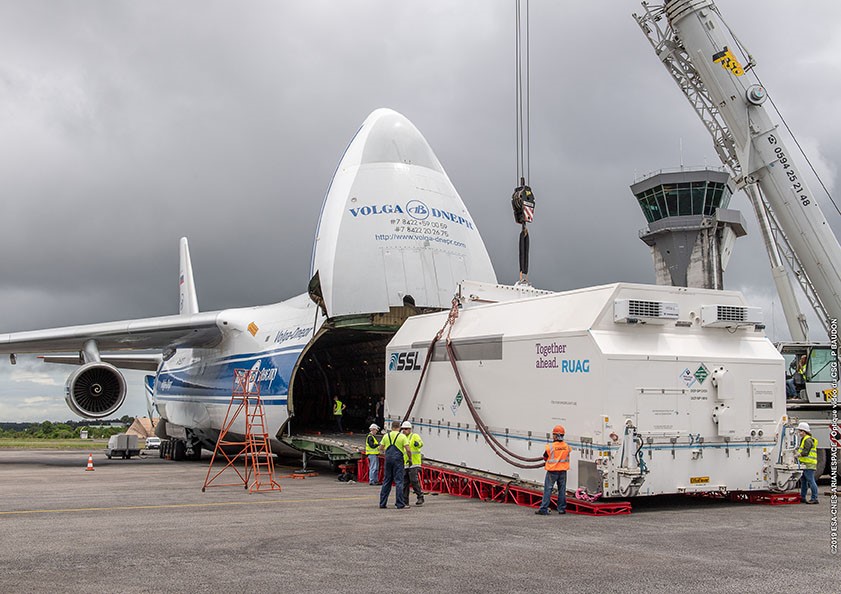 May 28 marks the arrival of client 2, Eutelsat 7C, at the airport in Cayenne. It now needs to be transported to the preparation building. 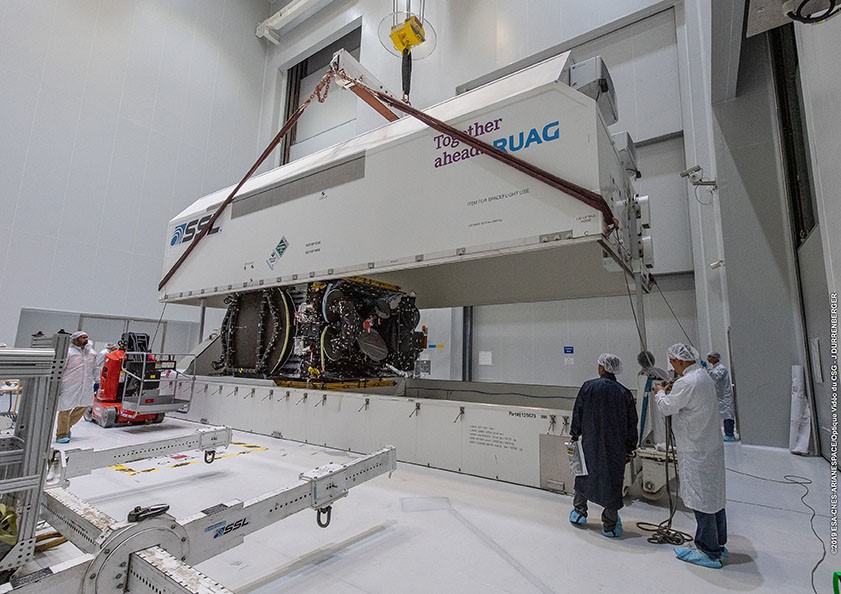 The container is opened and unpacked the following day, May 29 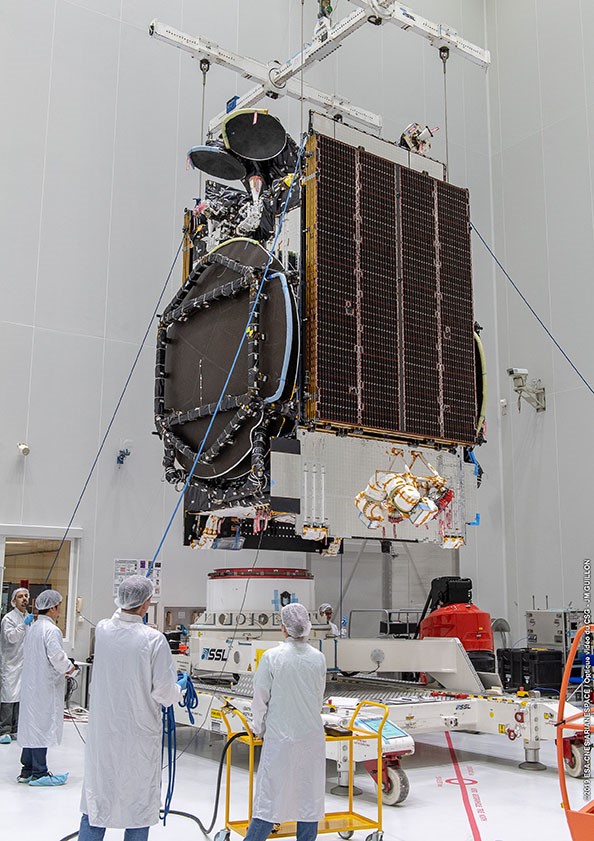 Eutelsat 7C is electrical, meaning there is no fuelling necessary. The fit check is done on May 30.

When the launch vehicle has been integrated, it is moved to the final assembly building where the satellites are received.  As the launch vehicle has been integrated on its launch table, it moves from one building to the other on the rail tracks. Then when they have finished the fuelling, they are ready to go the the final assembly building  This is an outdoor transport so a special container is used to protect the satellite. 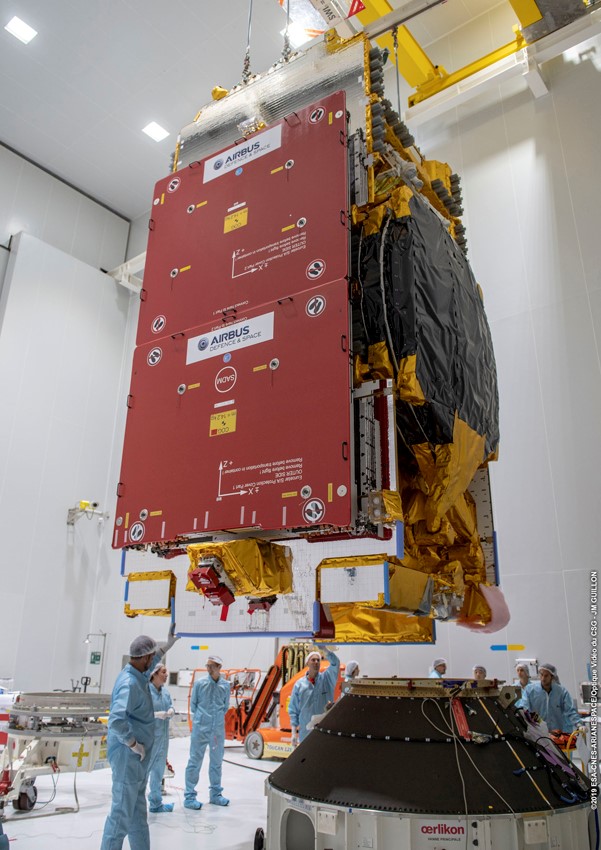 Step 1: Installation on the adaptor.

Step 2: Satellite plus adaptor Is moved to the base of the transport container.

On June 6, the container leaves the preparation building and goes to the final assembly building. The container and the transport vehicle ensures a perfect climate controlled environment for the satellite. Needless to say, the transporter moves very very slowly… the road needs to be closed which is why transport takes place outside working hours.

The next steps include moving the Eutelsat client to the final assembly building, and the first test with the launch base operational staff for VA248. This test takes half a day and involves necessary equipment/teams such as tracking radars and downrange telemetry stations. Next, there is a meeting to check readiness of the launch base in order to do the dress rehearsal. After that, there is the dress rehearsal, followed by the Flight Readiness Review two days in advance. After that, the next step is countdown to launch!

As always, you’ll be able to watch this launch live on www.arianespace.com.