Living with a comet: an OSIRIS team perspective

OSIRIS, Rosetta’s Optical, Spectroscopic and Infrared Remote Imaging System, has been our all-seeing eye on Comet 67P/Churyumov-Gerasimenko, capturing nearly 68,000 high-resolution images of its nucleus and coma from all angles for 924 days. Here the OSIRIS team share some insights beyond the beauty of the images their camera returns. With inputs from Holger Sierks, OSIRIS principal investigator. 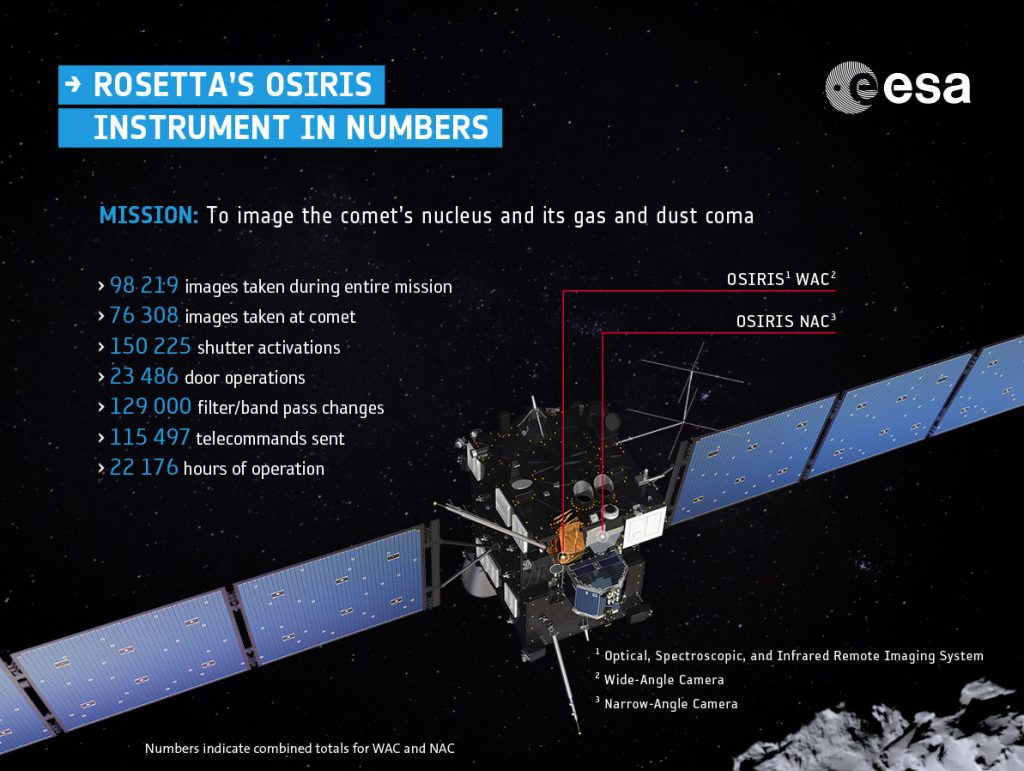 OSIRIS has always had a big team: there are 97 team members today, and more than 300 people were involved – including industry partners – at the time the camera system was built. The instrument itself comprises two cameras – a wide- and narrow-angle camera, three electronics boxes, eight harnesses, and 22 subsystems, which were provided by nine European research institutes, plus industry, and with the support of six space agencies.

This massive endeavour ultimately resulted in a grand total of 98,219 images taken throughout the entire mission, including beautiful images of the Earth and Moon during Earth flybys and one at Mars, and never-before seen views of asteroids Steins and Lutetia, even before starting the main mission at Comet 67P/C-G.

OSIRIS set sights on Comet 67P/C-G for the first time since waking up from its 31-deep space hibernation at the end of March 2014 (it had already imaged the comet in March 2011, just a few months before hibernation), and since then has taken 76,308 images. Of those, 67,905 are science images capturing the comet nucleus and its gas and dust coma, with the remainder technical images for calibration and testing. These were executed thanks to 115,497 commands transmitted to the spacecraft.

Philae falls away from Rosetta – as seen by the orbiter’s OSIRIS camera. Credits: ESA/Rosetta/MPS for OSIRIS Team MPS/UPD/LAM/IAA/SSO/INTA/UPM/DASP/IDA

In amongst those tens of thousands of comet images are a handful that captured the public’s attention for another reason: Philae. They also hold a special place with the OSIRIS team:

“I was most touched by the ‘free-floating’ Philae after separation, then later when we saw Philae floating above surface, and finally, earlier this month, Philae in its final resting place. It is beyond science…” says Holger. 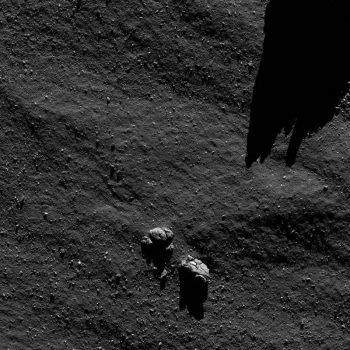 This image was taken on 23 September by the OSIRIS narrow-angle camera. Click for details via OSIRIS image of the day website. Credits: ESA/Rosetta/MPS for OSIRIS Team MPS/UPD/LAM/IAA/SSO/INTA/UPM/DASP/IDA

Also beyond science, but this time for more practical reasons, is the instrument’s housekeeping reporting: the coldest temperature recorded by OSIRIS was -124ºC – this was the measured NAC CCD temperature. By contrast, the highest measured temperature was +43ºC, at the WAC CRB (CCD readout board) power converter.

And, as with all of Rosetta’s instruments, there were plenty of bumps in the road: some 232 ‘non-conformance’ reports were generated in ground testing and during the mission.

Holger tells us that on the shelves at his home institute (the Max-Planck Institute for Solar System Research) alone, documentation concerning manuals, manufacturing and design documents, test reports, minutes of meetings and so on, span a length of about 40 metres!

Not included in that number is the impressive haul of scientific papers based on OSIRIS data: 83 completed so far, with another 31 currently in preparation.

We’re certainly looking forward to seeing what discoveries are still to come, and of course all eyes will be on the images that this incredible camera return during Rosetta’s final descent to the surface of the comet, tomorrow.