Less than a month before the end of the mission, Rosetta’s high-resolution camera has revealed the Philae lander wedged into a dark crack on Comet 67P/Churyumov–Gerasimenko. 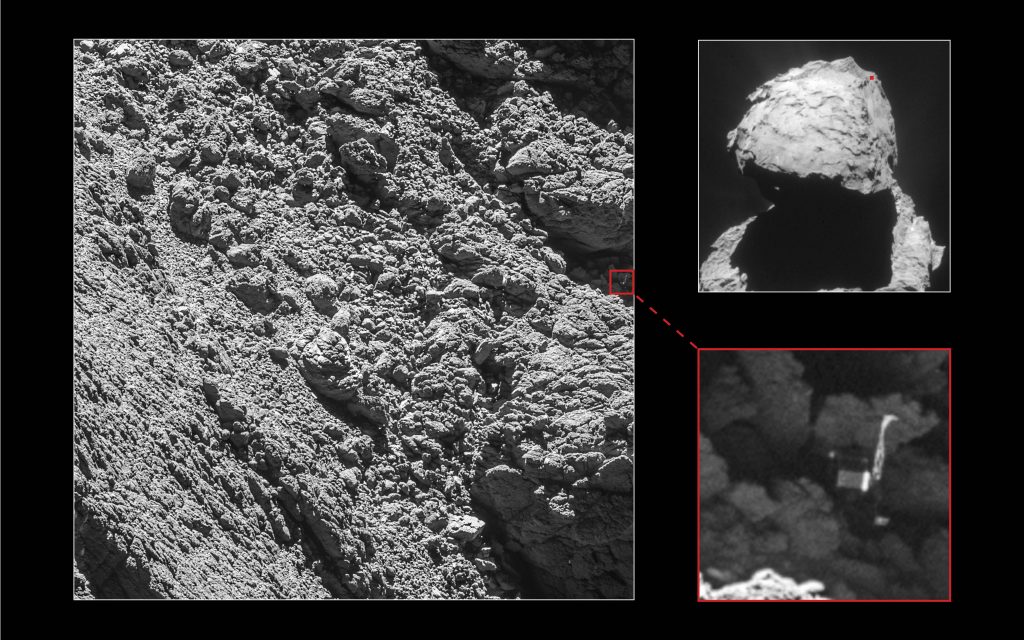 The images were taken on 2 September by the OSIRIS narrow-angle camera as the orbiter came within 2.7 km of the surface and clearly show the main body of the lander, along with two of its three legs.

The images also provide proof of Philae’s orientation, making it clear why establishing communications was so difficult following its landing on 12 November 2014. 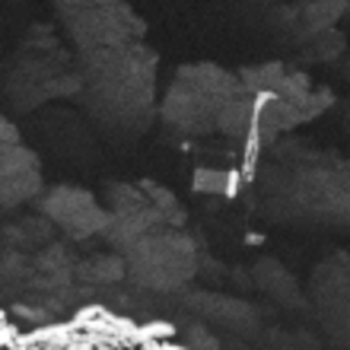 Close-up of the Philae lander, imaged by Rosetta’s OSIRIS narrow-angle camera on 2 September 2016 from a distance of 2.7 km. The image scale is about 5 cm/pixel. Philae’s 1 m-wide body and two of its three legs can be seen extended from the body. The images also provide proof of Philae’s orientation.
The image is a zoom from a wider-scene, and has been interpolated.
Credits: ESA/Rosetta/MPS for OSIRIS Team MPS/UPD/LAM/IAA/SSO/INTA/UPM/DASP/IDA

“With only a month left of the Rosetta mission, we are so happy to have finally imaged Philae, and to see it in such amazing detail,” says Cecilia Tubiana of the OSIRIS camera team, the first person to see the images when they were downlinked from Rosetta yesterday.

“After months of work, with the focus and the evidence pointing more and more to this lander candidate, I’m very excited and thrilled that we finally have this all-important picture of Philae sitting in Abydos,” says ESA’s Laurence O’Rourke, who has been coordinating the search efforts over the last months at ESA, with the OSIRIS and SONC/CNES teams.

Philae was last seen when it first touched down at Agilkia, bounced and then flew for another two hours before ending up at a location later named Abydos, on the comet’s smaller lobe.

After three days, Philae’s primary battery was exhausted and the lander went into hibernation, only to wake up again and communicate briefly with Rosetta in June and July 2015 as the comet came closer to the Sun and more power was available. 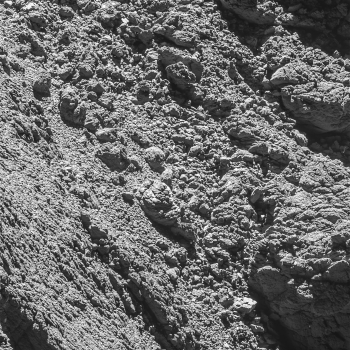 An OSIRIS narrow-angle camera image taken on 2 September 2016 from a distance of 2.7 km in which Philae was definitively identified. The image has been processed to adjust the dynamic range in order to see Philae while maintaining the details of the comet’s surface. Philae is located at the far right of the image, just above centre. The image scale is about 5 cm/pixel. Credits: ESA/Rosetta/MPS for OSIRIS Team MPS/UPD/LAM/IAA/SSO/INTA/UPM/DASP/IDA

However, until today, the precise location was not known. Radio ranging data tied its location down to an area spanning a few tens of metres, but a number of potential candidate objects identified in relatively low-resolution images taken from larger distances could not be analysed in detail until recently.

While most candidates could be discarded from analysis of the imagery and other techniques, evidence continued to build towards one particular target, which is now confirmed in images taken unprecedentedly close to the surface of the comet.

At 2.7 km, the resolution of the OSIRIS narrow-angle camera is about 5 cm/pixel, sufficient to reveal characteristic features of Philae’s 1 m-sized body and its legs, as seen in these definitive pictures.

“This remarkable discovery comes at the end of a long, painstaking search,” says Patrick Martin, ESA’s Rosetta Mission Manager. “We were beginning to think that Philae would remain lost forever. It is incredible we have captured this at the final hour.”

“This wonderful news means that we now have the missing ‘ground-truth’ information needed to put Philae’s three days of science into proper context, now that we know where that ground actually is!” says Matt Taylor, ESA’s Rosetta project scientist. 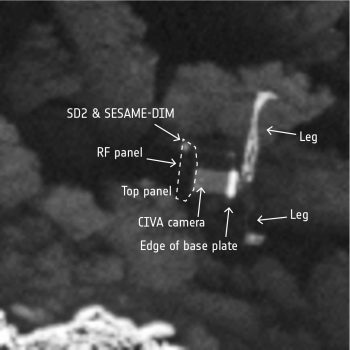 A number of Philae’s features can be made out in this image taken by Rosetta’s OSIRIS narrow-angle camera image on 2 September 2016, including one of the CIVA panoramic imaging cameras, the SD2 drill and SESAME-DIM (Surface Electric Sounding and Acoustic Monitoring Experiment Dust Impact Monitor). Credits: ESA/Rosetta/MPS for OSIRIS Team MPS/UPD/LAM/IAA/SSO/INTA/UPM/DASP/IDA

“Now that the lander search is finished we feel ready for Rosetta’s landing, and look forward to capturing even closer images of Rosetta’s touchdown site,” adds Holger Sierks, principal investigator of the OSIRIS camera.

The discovery comes less than a month before Rosetta descends to the comet’s surface. On 30 September, the orbiter will be sent on a final one-way mission to investigate the comet from close up, including the open pits in the Ma’at region, where it is hoped that critical observations will help to reveal secrets of the body’s interior structure.

Further information on the search that led to the discovery of Philae, along with additional images, will be made available soon.

For contact information, please see the story on the main ESA web portal.