Remember the stunning image Rosetta snapped of its own shadow last year? This was just one of twelve images taken by the OSIRIS narrow-angle camera during the 6 km flyby of Comet 67P/Churyumov-Gerasimenko on 14 February 2015 that captured the shadow, and which have today been released into the Archive Image Browser and the Planetary Science Archive.

Animation showing Rosetta’s shadow move across the surface of Comet 67P/Churyumov-Gerasimenko during the 14 February 2015 flyby. The sequence lasts from 12:38 to 12:41 UT. The full resolution images can be downloaded from the Archive. Credits: ESA/Rosetta/MPS for OSIRIS Team MPS/UPD/LAM/IAA/SSO/INTA/UPM/DASP/IDA

This latest OSIRIS data release comprises 1357 narrow-angle camera images and 2162 wide-angle camera images from the period 20 December 2014 – 10 March 2015. During this time Rosetta was initially in ~28 km orbits around the comet. In early February the spacecraft moved out to 142 km before swooping past the comet at 6 km on 14 February and away again (this video visualizes Rosetta’s trajectory at that time).

The 14 February flyby was not only special because it was the closest Rosetta had ever been to the surface of the comet at that time but it also passed through a unique observational geometry: for a short time the Sun, spacecraft, and comet were exactly aligned. In this geometry, surface structures cast almost no shadows, and therefore the reflection properties of the surface material can be determined. As a side effect, Rosetta’s shadow could also be seen, cast on the surface of the comet as a fuzzy rectangular-shaped dark spot surrounded by a bright halo-like region. The shadow is fuzzy and somewhat larger than Rosetta itself, measuring approximately 20 x 50 metres. (For more information about this effect see last year’s blog post “Comet flyby: OSIRIS catches glimpse of Rosetta’s shadow“). 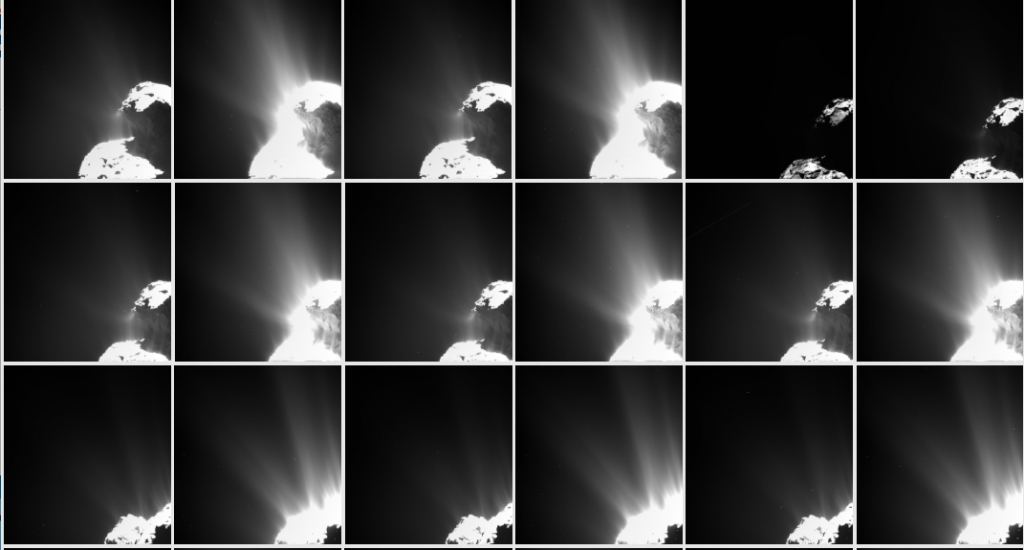 Example of images from the OSIRIS wide-angle camera albums in the latest data release. Credits: ESA/Rosetta/MPS for OSIRIS Team MPS/UPD/LAM/IAA/SSO/INTA/UPM/DASP/IDA

The data release also contains many other beauty shots of the comet from both near and far, with the wide-angle camera shots in particular capturing the comet’s ever-increasing activity at that time.

Also today, 540 new NAVCAM images were added to the Archive Image Browser. The latest batch cover the period 4-31 May 2016 and as such include images from the close flyby that took Rosetta to within 5 km of the surface. 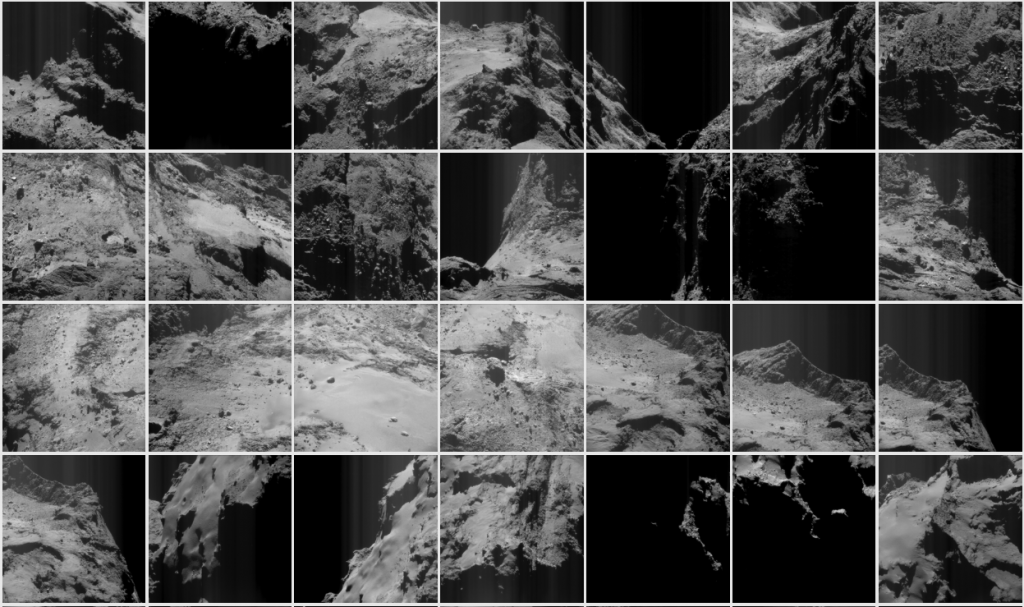 Examples of NAVCAM images from the May 2016 archive. Credits: ESA/Rosetta/NavCam – CC BY-SA IGO 3.0