The Rosetta Downlink and Archive group is pleased to announce the release of Rosetta OSIRIS images from both the wide- and narrow-angle cameras (WAC and NAC, respectively) to the Archive Image Browser and to the Planetary Science Archive.

The images cover the period 20 June 2014 – 16 September 2014, corresponding to Rosetta’s approach to the comet, arrival, and insertion into orbit. 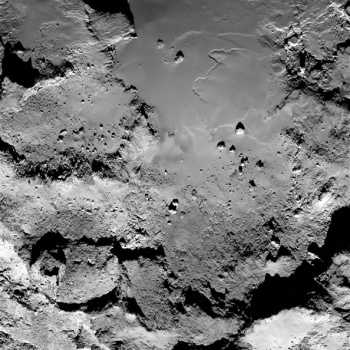 One of the many images released today, this one showing part of the Imhotep region seen through Rosetta’s OSIRIS narrow-angle camera on 5 September 2014, from a distance of 43 km from the comet centre. Credit: ESA/Rosetta/MPS for OSIRIS Team MPS/UPD/LAM/IAA/SSO/INTA/UPM/DASP/IDA

Comparing the images from the start to the end of the period shows the incredible increase in detail as Rosetta moved from thousands of kilometres from Comet 67P/Churyumov-Gerasimenko to within just 30 km. The images and data collected in the weeks following arrival at the comet on 6 August were used to select Philae’s landing site.

Now that significant work has been done to improve the OSIRIS image processing pipeline to ensure that the submitted dataset is compatible with the archive standards, more regular releases are expected.

The next release of OSIRIS images is anticipated for late January 2016 and is planned to include data from the close observation phase – when the spacecraft was just 10 km from the comet – and from the period around comet landing.

Update 18 Dec: A short FAQ has been added to the browser to answer questions that have arisen since this release regarding, for example, the orientation of the images, and differences in format/metadata between what is provided in the browser and in the Planetary Science Archive.