The story behind the Rosetta ‘claymation’

Earlier this month, the Royal Observatory Greenwich, UK, released a wonderful educational video about the Rosetta Mission using ‘claymation’ – animated clay figures. It was a big hit with the Rosetta team and so we caught up with Elizabeth Avery, senior manager of Astronomy Education at the ROG and one of the minds behind the video, to learn more about how it was put together. The same team at the ROG has also since released a complementary video called Space Rocks, about asteroids, comets, meteors, and meteorites. You can watch both videos as part of this post.

What made you choose to focus on the Rosetta mission for this video?
We have a very long list of things we would love to make videos about, so it is always a huge challenge to choose just one topic. When we were first thinking of ideas for a video project, Rosetta and Philae were in the news a lot, people were excited about such an amazing mission, and many of our visitors had lots of questions about it.  We knew these videos were going to be created for schools (age 9-14), so as with all our other schools videos, we asked our teacher forum what they would like. The Rosetta Mission and Space Rocks were topics that came up again and again, so we were confident they would be good topics to go for. 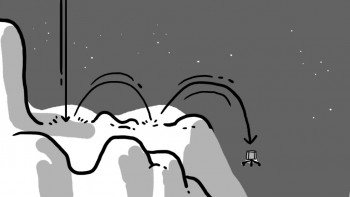 Why did you choose ‘claymation’ to tell the story?
This was actually something we hadn’t tried before.  The design team we were working with at Beakus (directed by Amaël Isnard) suggested it and when we saw the first drafts, we knew we were on to a winner! After we had secured the funding, it took around two months to plan the videos, get scripts together, record the voiceovers, work with the designers, choose the music, and get them ready for launch.

Who were the artists and scriptwriters?
We always write the scripts in house at the Royal Observatory Greenwich, because we have worked hard to develop a strong yet friendly voice for school video resources, so we want to make sure we keep that.  When it comes to choosing voiceovers, we always look within the team or wider organisation first; we all present sessions regularly, so there are lots of fabulous voices to choose from. This was not a solo project though; we worked with other really great organisations to create these videos. The design company Beakus helped us to think about how to represent our ideas visually and the team at the Open University Rosetta in the UK team worked with us to choose what things to include in the video, keeping us up to date on any new developments with the mission, too.

The characters depicted in mission control generated some fun internal debate at ESA as to who they were based on – were there particular scenes or specific people that inspired the scenes?
It was really important to us that these videos not only showed the amazing science behind the Rosetta Mission, but the people too. We could have included any of the hundreds of people that worked on the Rosetta Mission because they all had so many brilliant and inspirational stories to tell about their work. However, with two minutes to play with it was tricky to choose only a few people who could act as representatives. Instead we used celebration videos including a variety of people available on the ESA website as our inspiration.

You also released another video ‘Space Rocks’ in the same style, and which also features the Rosetta mission; what inspired that video?
We are often asked about space rocks, that is, comets, asteroids, meteors, meteorites and so on, and the names associated with them, and also the difference between them. It is a really fascinating topic that sparks a lot of interest with our visitors. It also fitted well with the Rosetta Mission video, so we thought it was an excellent opportunity to go into a little more detail on some of the things we just couldn’t squeeze into the Rosetta video.

The videos have attracted a lot of views and positive reactions, and we’ve seen it shared widely on social media  – were you expecting this level of reaction?
The reaction so far has been amazing and really has blown our socks off.  Going into a new project, we always hope that people will enjoy what we create and find it helpful to understand more about space. But we weren’t expecting such a huge positive reaction in such a short space of time.

It was the same for us going into the “Once upon a time…” cartoon adventures of Rosetta and Philae, and the overwhelming response to the first episode indicated we should continue the series… (new episode coming soon!)…will you continue with the claymation theme for future videos?
We are currently creating classroom resources that will accompany the current videos, so keep your eyes peeled for those in the next two months. We have been creating videos (live action and animation) for a few years now and plan to make lots more, starting with the next set that will be released in March 2016.  We have already done videos about black holes, aliens, the age of the Sun, and the size of the Universe, so we need to get our thinking caps on to come up with something new for the next batch. It is possible we will go down the claymation route again but we always like to see what fits best with each topic and see what our designers recommend before we choose a style.

What other projects are you working on?
In the meantime we are working on blogs (Spacebook ) and podcasts (Look Up ), as well as some other exciting digital projects like Creative Cosmos, which is in association with the Insight Astronomy Photographer of the Year Competition.  Creative Cosmos is a special project with amazing prizes, students can win goodie bags and even the chance to have their very own astronomy photograph shown in our planetarium.  It is safe to say we are very busy astronomers!

All of our videos can be seen here: https://vimeo.com/royalobservatory

More about the ROG:
The Royal Observatory at Greenwich was founded by King Charles II in 1675 and is one of the most important historic scientific sites in the world. Today the Observatory is a museum and science centre, which provides access to information about space to schools and the wider public.

Stills from the creation stage of the videos courtesy of Elizabeth Avery/ROG.