Amateur astronomers keeping an eye on the comet

This post is an interview with Padma A. Yanamandra-Fisher, a Senior Research Scientist at the Space Science Institute, USA, and the Rosetta Coordinator of Amateur Observations for 67P/C-G.

Q: When did the amateur campaign to observe Rosetta’s comet start?

Comet 67P/C-G on 12 November 2014, the day when Rosetta released Philae to land on its surface. Image taken by Rolando Ligustri (Italy) using a remote telescope from the iTelescope.net network located in Australia. Credit: R. Ligustri

A: The first observations of Comet 67P/Churyumov-Gerasimenko by amateur astronomers for this stretch of the comet’s orbit, leading to the 2015 perihelion, were performed in March 2014. At the time, the comet was very faint and only visible from the southern hemisphere, with a magnitude around 20, just at the limit of detection by small telescopes. In addition, the comet was in a highly dense star field and not always easy to image.

From March to November 2014, we received about a dozen or so decent images from amateurs located at various locations such as Australia, South America, the USA and some parts of Europe. We compiled these early amateur images of the comet in a short video produced by Carolyn Collins Petersen.

On 13 April, amateur astronomers Jean-Francois Soulier, Jean-Gabriel Bosch and Alain Maury recovered the comet using (remotely) the Space Observatory in Chile, at a magnitude of 16.8. This detection kicked off the worldwide campaign to observe 67P/C-G in 2015.

Q: How many members joined the campaign so far and where are they based?

A: So far, about 250 amateur astronomers have signed up to join the campaign. They are based all over the world, from Europe to South America, from Australia to India, from South Africa to the Caribbean. However, as the comet is very low above the horizon at northern latitudes, it was predominantly observed with telescopes in the southern hemisphere until July. Currently, it has been moving towards northern latitudes and it is best observable from the northern hemisphere.

We have a core network of amateur astronomers using telescopes at various locations (also remotely) that are providing frequent observations – averaging about once every few days, weather and observing conditions permitting.

The comet’s coma and tail are visible in this 75 minute-long exposure taken by Alain Maury, Joaquin Fabrega Polleri and Jean François Soulier from Chile on 14 June 2015. The tail spans about 4 arc minutes, equivalent to about 350,000 km projected on the sky. Credit: A. Maury, J. Fabrega Polleri, J.-F. Soulier

Even though the spatial resolution is less than that afforded by professional observing facilities, the contribution of amateurs is important to provide a long baseline of continuous ground-based observations, complementing the data collected by professional astronomers from Earth, from space telescopes near our planet and at the comet by Rosetta.

Q: How many images have been collected so far by the amateur community? Did they also obtain other types of data? What can you tell from the current data?

A: Since the beginning of the campaign, we have already collected close to a hundred images of Comet 67P/C-G, showing the gentle increase in its activity. The images are shared with the members of our Pro-Am astronomer Facebook group. We plan to compute light curves, monitoring the evolution of the comet’s brightness and comparing it with its behaviour during previous perihelion passes. We can visually see the evolution of the comet’s coma and tail over time, as seen in Efrain Morales’ composite of images from June to August 2015, obtained from his observatory in Puerto Rico (USA).

The images collected by the campaign members are showcased on the group’s Flickr page. We encourage amateur observers that are not members of the campaign to share/upload their images there.

A compilation of images of Comet 67P/C-G obtained by Efrain Morales from Puerto Rico (USA) between June and August 2015, showing the evolution of the comet in the past few months. Credit: E. Morales

Q: How is the campaign supporting the science that will be performed with Rosetta’s observations?

A: As opposed to the professional community, amateur astronomers have the advantage of being able to observe the comet over longer time frames and without the need to compete for observing time. Through the amateur community’s global network, they can provide alerts should the comet exhibit any unusual behaviour, as well as other specific support as needed by both the mission teams and professional observers. 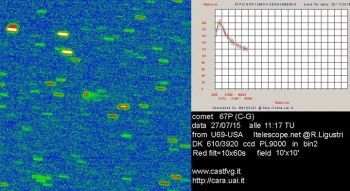 While the coma becomes brighter as the comet approaches the Sun and in the few weeks after perihelion, ground-based observations (by both professional and amateur astronomers) provide information about the distribution of material, in contrast to the near-field observations of the nucleus and its activity performed by Rosetta. However, at the exact moment of perihelion, only Rosetta will be able to observe the comet.

Q: Is it still possible to join the campaign and, in that case, what are the minimum telescope requirements needed to observe Comet 67P/C-G?

A: Of course! Amateur astronomers will have the chance to make significant contributions to the campaign around the comet’s perihelion – which will take place on 13 August – and beyond, as the comet will be at its brightest between September and November 2015. The campaign will run for several months, as long as the comet can be detected (until it has magnitude around 20), and you are welcome to join the campaign by registering here and on the PACA Facebook page.

To observe Comet 67P/C-G, we recommend you use a telescope with a minimum size of about 8 inches (20 centimeters), good star charts for locating it and observing log forms to record the observations. Information about these resources are provided in our Observer’s guide (which is being continuously updated). Additionally, local astronomy clubs and planetaria will also provide opportunities to participate in the campaign.

It would be great if observers with access to spectra, polarization, and multiple filters could take observations in all these modes too, to compare them with and complement professional observations of this and other comets. 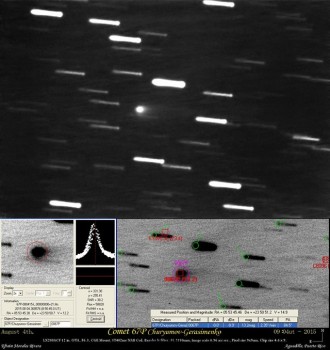 One of the latest images of Comet 67P/C-G from the amateur network. The comet has a magnitude of 13.3 – very close to the predicted value for its brightness at perihelion. Image obtained by Efrain Morales from Puerto Rico (USA) on 4 August 2015. Credit: E. Morales

Q: What are you most curious about perihelion?

A: Everything! Now that we know the comet has seasons, with the southern lobe experiencing its summer for a short intense period of time, and with Rosetta observing the nucleus and the ongoing evolution of activity, I am curious and excited to understand what happens as the seasons change.

Is the nature of activity and dust similar to that observed for the northern seasons? Also, how does the activity slowly fade or stop, both as a function of seasons and as the comet recedes from us? I am sure there will be more questions and puzzles as Rosetta escorts the comet through all these phases.

An update on the professional ground-based campaign to observe 67P/C-G was posted two weeks ago on the blog.