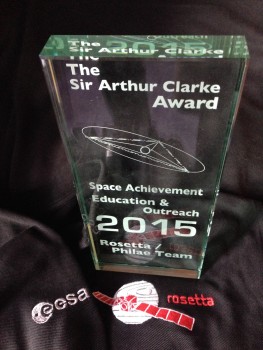 We are delighted to let you know that the team working on outreach for ESA’s Rosetta mission has been awarded the UK’s Sir Arthur Clarke Award 2015 in the category of “Space Achievement – Education and Outreach.”

The Sir Arthur Clarke Awards have been presented annually in the UK since 2005 to recognise and reward notable or outstanding achievements in, or contributions to, all space activities.

This year’s awards were announced to an audience of 600 delegates and guests at the UK Space Conference Gala Dinner and Awards in St George’s Hall, Liverpool on Tuesday 14 July 2015 by Rob Douglas, Chairman of the Board of the UK Space Agency, and presented by Dr Helen Sharman, the UK’s first cosmonaut. The Awards are sponsored by the UK Space Agency in collaboration with the British Interplanetary Society and Arthur C. Clarke Foundation.

ESA’s Professor Mark McCaughrean, senior science advisor in the Directorate of Science & Robotic Exploration, was in Liverpool to give an invited dinner presentation on Rosetta and collected the award on behalf of everyone who has contributed to the mission’s outreach and education.

Mark said: “It’s an enormous honour to have picked up this award on behalf of the many talented people who help bring the amazing story of Rosetta and Philae into schools and to the wider public around the world. In addition to the communications and education teams at ESA, this includes all of our partner space agencies, the Rosetta and Philae scientists and their institutes, and the many creative individuals and companies who put together art, graphics, film, documentaries, music, and poetry to engage and inspire.”

“The Rosetta/Philae Outreach Team turned a great scientific achievement into a really great popular science outreach achievement. They had the most engaged audience for a space event for a very long time, having created an extremely wide range of publicity material, from the amazing top-level science fiction/science fact introductory film ‘Ambition’, the detailed press kits, and the entertaining ‘Once upon a time’ cartoon videos, covering each campaign milestone. They produced brochures, models, and posters and put out a continuous stream of blog posts, tweets, hang-outs, and a series of ‘Comet Hunter’ videos on Euronews to keep everyone up-to-date with the mission status, the ever-changing state of Comet 67P/C-G, and the scientific results. They also made brilliant teaching/educational resources available, including a dedicated website, the primary and secondary lessons, and the fantastic Paxi alien educator.”

For background on the Sir Arthur Clarke Awards and winners of the other categories in this year’s awards, see the press release on the British Interplanetary Society website.