Based on the NASA-JPL press release reporting the results of Rosetta’s MIRO instrument, NASA’s Microwave Instrument on the Rosetta Orbiter and with additional inputs from the MIRO team.

OSIRIS wide-angle camera image acquired on 22 November 2014 from a distance of 30 km from Comet 67P/C-G. The image resolution is 2.8 m/pixel.
Credits: ESA/Rosetta/MPS for OSIRIS Team MPS/UPD/LAM/IAA/SSO/INTA/UPM/DASP/IDA

There has been a significant increase in the amount of water “pouring” out of comet 67P/Churyumov-Gerasimenko, report MIRO scientists in a paper published in the journal Science  last night. The 4 km-wide comet was releasing the equivalent of 1.2 litres of water vapour into space every second at the end of August 2014.

“In observations over a period of three months [June through August, 2014], the amount of water in vapour form that the comet was dumping into space grew about tenfold,” said Sam Gulkis, principal investigator of the MIRO instrument at NASA’s Jet Propulsion Laboratory, and lead author of the new paper. “To be up close and personal with a comet for an extended period of time has provided us with an unprecedented opportunity to see how comets transform from cold, icy bodies to active objects spewing out gas and dust as they get closer to the Sun.”

The MIRO instrument is a small and lightweight spectrometer that can map the abundance, temperature and velocity of cometary water vapour and other molecules that the nucleus releases. It can also measure the temperature to several centimetres below the surface of the comet’s nucleus.

For September, the comet subsurface temperatures were found to be in the 30 to 190 K range (approx. -243 to -83ºC), roughly 1 cm below the surface. The upper value is expected to increase significantly as the comet approaches perihelion in August this year. 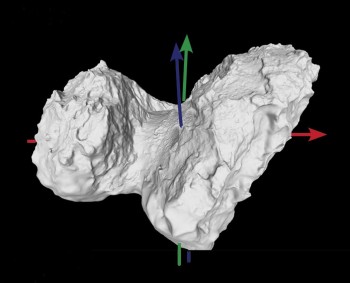 While there are day/night variations at any one location, seasonal effects are the largest component of that range, with some latitudes being much colder than others. For example, the coldest values are found in the south polar region, which has been in winter – and not seen the Sun – for several years. Meanwhile the highest temperatures occur near the sub-solar latitude (which in September was in the comet’s northern hemisphere).

The extent of the day/night variations are also latitude dependent. Variations are near zero at the winter pole (meaning there is no sunlight day or night, so things don’t change much over a rotation), while subsurface variations can be ~50 K at summer mid-latitudes.

One reason the subsurface temperature determination is so important is that the observed gases likely come from sublimating ices beneath the surface. By combining information on both the gas and the subsurface, MIRO will be able to study this process in detail.

Indeed, the MIRO team already reports that 67P/C-G spews out more gas from certain locations and at certain times during its “day,” with a substantial portion of the measured outgassing from June through September 2014 occurring from the neck region during the afternoon.

“That situation may be changing now that the comet is getting warmer,” said Gulkis. “MIRO observations would need to be carefully analysed to determine which factors in addition to the Sun’s warmth are responsible for the cometary outgassing.”

The team is continuing to search for variability in the production rate and changes in the parts of the nucleus that release gas as the comet’s distance from the Sun changes. This information will help scientists understand how comets evolve as they orbit and move toward and then away from the Sun. The gas production rate is also important to the Rosetta navigation team controlling the spacecraft, as this flowing gas can alter the trajectory of the spacecraft.

“Subsurface properties and early activity of comet 67P/Churyumov-Gerasimenko” by S. Gulkis et al. is available to read in the 23 January issue of Science.