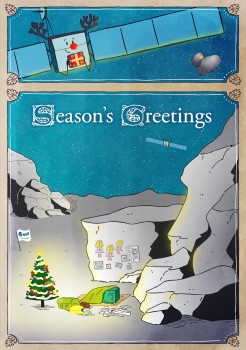 A short note from the blog team here at ESA: after an amazing but exhausting year, we’re going to take a year-end break between Monday, 22 December 2014 and Monday, 5 January 2015. Over this fortnight, we do not expect to receive any new information from the Rosetta scientists or mission teams, and so do not foresee any new routine posts, including NAVCAM images.

The only exception might be if Philae is located in images taken by Rosetta in recent days and, in that case, we’d aim to bring you the news as soon as possible.

In addition, due to the time required to review and moderate comments, we’re going to disable the commenting function on all posts/pages over this period; existing comments will remain, but no new comments can be submitted and added during the break. This will be re-enabled on 5 January.

It has been a huge pleasure running this blog in 2014! From the anticipation of the 20 January wake-up to the 6 August rendezvous and then the 12 November landing, it has been a real roller-coaster ride for everyone involved here at ESA and in all the Rosetta teams.

And we’ve had a fantastic experience watching this passionate outside community grow and we would like to pass on our thanks to the hundreds (or has it been thousands?) of people from all around the world who have taken time to follow along, to contribute, and to share their enthusiasm for the Rosetta mission.

We have appreciated all the queries, comments, replies, opinions, counter-opinions and, indeed, multiple arguments that have been posted. We hope that we’ve done an acceptable job of allowing the myriad of valid opinions and heartfelt viewpoints – even the ones we (or others) disagreed with – while wielding a deft touch in disallowing the comments and posts that were beyond the pale.

Thank you for your support, passion and genuine enthusiasm for the Rosetta mission in 2014. You have all helped make the mission a worldwide phenomenon.

We look forward to having you back ‘on the blog’ in the New Year. After all, as Comet 67P/C-G moves in towards its closest point to the Sun in August, we’re promised a grandstand view of the fireworks from Rosetta, and there should be plenty to share and discuss. In many ways, the mission has just begun!

Best wishes for a joyful year-end holiday and a happy and healthy 2015.