Behind the scenes of ‘The singing comet’ 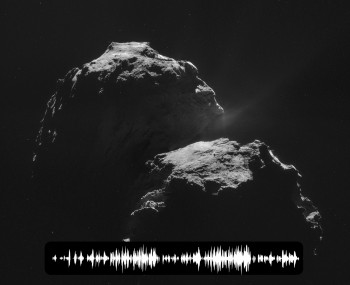 Last month, shortly before Rosetta released Philae to land on Comet 67P/C-G, we posted an article on this blog titled “The singing comet”. It presented an audio track based on data collected with one of the instruments from the Rosetta Plasma Consortium (RPC) on board the orbiter.

Perhaps because it added a new layer to the Rosetta story, by engaging another of our human senses to the immersive experience of “being there” at the comet with the spacecraft, this ‘song’ became a worldwide sensation. By now, it has been listened to more than 5.6 million times on SoundCloud.

But what does this ‘music’ mean, and how is it possible to ‘record’ sounds in space at all? Readers of this blog have asked a number of questions about “The singing comet”, so we’ve written this post to provide some more details about the production of this unusual audio track.

“Clearly, there is no sound as we know it, because acoustic waves need a medium to propagate through, such as an atmosphere, whereas the (almost) empty space around the comet does not allow for that,” explains RPC principal investigator Karl-Heinz Glaßmeier from the Technische Universität Braunschweig, Germany.

“But there is another type of wave that can propagate in the tenuous mixture of charged particles and ions, or plasma, present in the comet’s environment. These magneto-acoustic waves are caused by the interaction of the local plasma around the comet with the magnetic field carried by the solar wind, a stream of electrically charged particles blown by the Sun,” says Karl-Heinz.

While probing the magnetic environment of the comet, the magnetometer on Rosetta (RPC-Mag) detected these waves as very regular oscillations in the local magnetic field. At only a few nanotesla, this field is very weak, roughly a million times less than from a regular fridge magnet, but RPC-Mag is readily able to detect it.

“We cannot see magnetic fields, but we can transform their oscillations and make them audible as if we had magnetic ears.”

The technique used to represent scientific data in an audible form is called ‘sonification’. The first step is to map the data onto frequencies that humans can hear, typically in the range of 20 to 20,000 Hz. The oscillations measured by RPC-Mag exhibit various frequencies in the range between 40 and 50 millihertz, meaning that they change very slowly on timescales of about 20–25 seconds.

“But there was more: since the magnetic field is a vector, it has not one but three components, so it has different oscillations in the three spatial dimensions,” adds Karl-Heinz.

And this is where Manuel Senfft stepped in. A composer and sound designer from Wolfenbüttel, near Braunschweig, Germany, Manuel also enjoys developing software in his spare time, and happily jumped in on this crossover project blending science and music.

“At first, we tried to associate each component of the magnetic field to a different synthesiser and then mix them together, but unfortunately this sound turned out to be quite exhausting to listen to. So we took a different approach, using a ‘stereo spatial positioning’ technique that I developed to make sound ‘evolve’ in a virtual space,” explains Manuel. 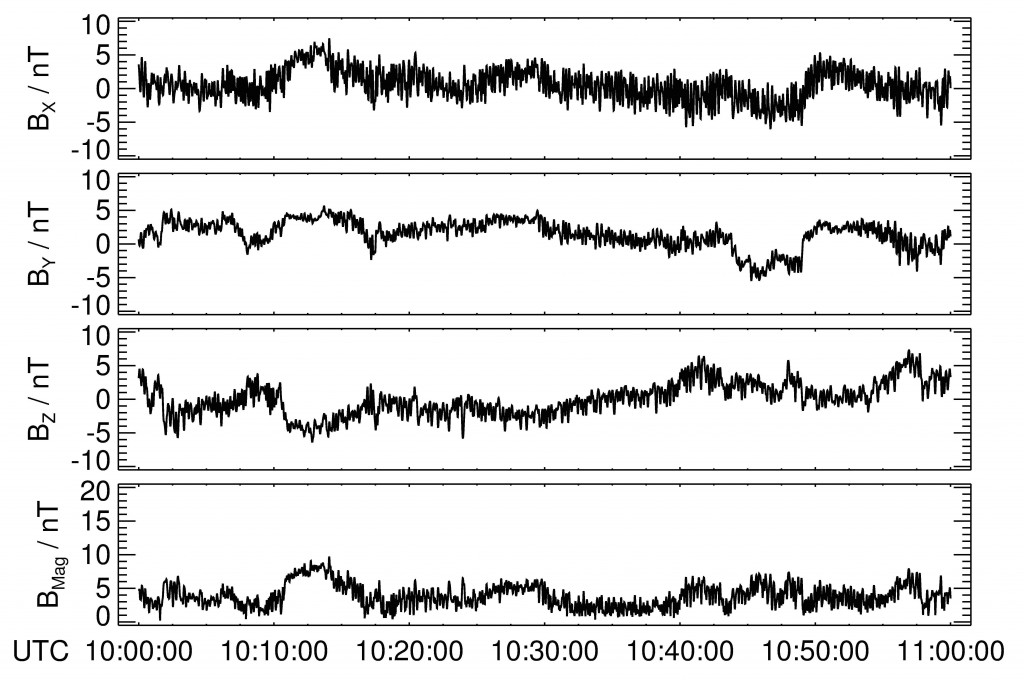 With over 85,000 lines of data from only one day of measurements at the comet, Manuel decided to take one of the three components of the magnetic field as the sound itself, with the variations in that component being reflected in the changing pitch. He took samples from the data on a one-minute basis, thus 1440 samples covering the day, and assigned these to MIDI controller values in the audible frequency range. He then mapped these onto a 90 second timeline to create the basic song.

Then he used variations in the other two components of the magnetic field to control the location of the sound in a ‘sound stage’ with respect to the listener, moving it back and forth and left and right.

Indeed, Rosetta moved just a few kilometres relative to the comet during the day when the data were collected in September 2014.

“Of course, there is no unique ‘sound’ and this is one of many possible renditions of the magnetic-acoustic oscillations recorded by Rosetta. But in some ways, this is not so different from image processing: if we flew by the comet and looked it through our eyes, we probably wouldn’t be able to perceive most of the small intensity variations and shades of grey because the comet is pitch black,” explains Karl-Heinz.

“With our magnetic measurements of the comet’s environment, we chose to combine the data in such a way that makes the most interesting details stand out. Incidentally, we also created a beautiful sound!”

Find out more about the collaboration between Karl-Heinz Glaßmeier and Manuel Senfft in this video: